Get the newsletter now
US retail

Brooks Brothers files for bankruptcy in ‘work from home’ era

Brooks Brothers has become the latest venerable retailer to be pushed over the edge by the coronavirus pandemic as the two centuries-old purveyor of American business wear filed for US bankruptcy protection.

The New York-based company, whose upmarket suits were once sported by presidents including Abraham Lincoln and John F Kennedy and stars such as Fred Astaire as well as generations of Wall Street bankers, sought Chapter 11 protection on Wednesday in Delaware.

Brooks Brothers, which has about 500 stores globally and employs 4,000 people, said it had secured $75m in financing to tide it through the bankruptcy as it intended to find a buyer and avoid liquidation.

“Brooks Brothers is here to stay and serve our loyal customers for years to come,” it said in a statement on Wednesday, adding that it hoped to complete a sale within the next few months.

The filing underlines the mounting financial pressures in US retail as a collapse in sales leaves chains struggling to meet their financial obligations. Fashion group J Crew and department store chain Neiman Marcus are among the other chains that have also sought bankruptcy protection during the pandemic.

More bankruptcies are expected in coming weeks. Ascena Retail, the womenswear group behind Ann Taylor, which catered for female office wear, has said it is evaluating “all options” to safeguard its business as it grapples with a heavy debt burden.

Within the past week, the denim fashion companies G-Star RAW and Lucky Brand have filed for Chapter 11 protection.

Mr Del Vecchio took charge after he bought the business from Marks and Spencer in 2001 for $225m, a fraction of the $750m that the UK retailer had paid for it. Previous owners of the retailer, which is headquartered on Manhattan’s Madison Avenue, include Robert Campeau, the late Canadian property developer. 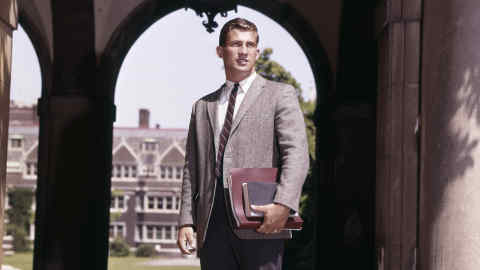 Despite its prestigious history, the company suffered as workplaces became more casual and the button-down Oxford shirts, braces and brogues that long epitomised the Brooks Brothers look fell out of favour.

Conservative brands have seemed increasingly out of touch to younger shoppers who have turned to alternative labels in part because they were seen as more inclusive, said Neil Saunders, managing director of GlobalData Retail.

“When it comes to tastes and style, Brooks Brothers has been swimming against the tide,” he said. “Its formal, old-school approach found favour among mature and more traditional demographics, but it has become increasingly out of step with a new generation of consumers.”

Brooks Brothers sought to modernise the brand, offering shorts, fleeces and T-shirts, and had been conducting a strategic review before the pandemic.

However, the coronavirus shutdown has taken a heavy toll, not least because the rise of working from home has further reduced demand for its business apparel. The company had already decided to close about 50 stores.

Mr Del Vecchio said in a statement: “Our priority is to start this important chapter with a new owner that has appreciation for the Brooks Brothers legacy.”

Get alerts on US retail when a new story is published