Homo Faber: the master craftsman versus the machine

A Venice exhibition celebrates the skilled work of artisans

In his Milan atelier, master embroiderer Pino Grasso is explaining how he created an intricate weave of sequins and silk for a design that recalls a Renaissance fresco but is, in fact, a piece of a Valentino gown. “We work the same way they did 200 years ago,” he tells me. “The only difference today is the style, the colours.”

Craftsmen like Grasso, who is now in his 80s, have remained out of the limelight for decades, as globalisation has put the emphasis firmly on brand names and industrialised manufacturing. But an exhibition opening in Venice in September, at the Fondazione Giorgio Cini on the island of San Giorgio Maggiore, seeks to turn the spotlight back on European craftsmanship and its tradition of master craftsmen.

Homo Faber: Crafting a More Human Future celebrates the Renaissance ideal of “man as maker”. The exhibition, which coincides with the Venice Biennale of Architecture, will bring together a vast range of materials and objects from jewellery to bicycles, and will showcase rare artisanal techniques as well as better-known examples of European workmanship. It will fill the Fondazione Giorgio Cini’s galleries, libraries, cloisters and even its swimming pool with artworks and artisans, who will be working in full view.

The exhibition is the brainchild of Johann Rupert, the South African billionaire behind the Swiss luxury goods group Richemont. It is organised by the Michelangelo Foundation, a not-for-profit that Rupert launched 18 months ago (with the former Cartier executive Franco Cologni), with the aim of promoting creativity and craftsmanship in Europe and beyond.

Rupert champions traditional skills over recent technological developments, in fields such as robotics and artificial intelligence. The exhibition provides an overview of European fine craftsmanship and, as Rupert has previously stated, it will emphasise “what human beings can do better than machines”.

“It is about making sure Europe remains a workshop for the world,” he said at the foundation’s launch event at Villa Mozart in Milan, a 1930s ivy-covered Italian deco villa whose marble and marquetry floors are a testament to local craftsmanship.

“We have seen the rise of hate, and this is just before we are going to be hit by artificial intelligence and robots. A whole stratum of employment is going to be wiped out,” he continued.

He believes European manufacturing needs to define its special qualities, as distinct from its technology-driven competitors China and the US. “So what has Europe got that is unique? Europe has got culture, taste, style, authenticity and generations of small businesses,” said the 67-year-old.

Rupert, whose father made a fortune setting up Rembrandt Tobacco Corp and selling it off, earned the sobriquet “Rupert the Bear” for his pessimistic views on the global economy. However he believes the robotics revolution has a silver lining for traditional manufacturing. “There will be a premium on the human eye and hand. And Europe has got that,” he says. With this in mind, the Michelangelo Foundation has secured partnerships with many arts and crafts museums, associations and foundations across the continent since it was set up.

De Lucchi, who has designed for Artemide, Unifor, Hermès and Alessi, will curate a series of works pairing designers with artists in one of the Fondazione Giorgio Cini’s Palladio-designed halls. Tehran-born Mahdavi will create two interiors, each showcasing different techniques and materials.

And in the 1960s-designed swimming pool, Clark, who is a professor at the London College of Fashion, is curating an exhibition titled Fashion Inside and Out.

The show comes at a moment when what has been dubbed the “maker tradition” is already a cultural force among urban hipsters from Los Angeles to London, and is being explored in books and shows. Masters of Craft: Old Jobs in the New Urban Economy, a study published in 2017 by academic Richard E Ocejo, looked at how educated, culturally aware young people are turning what was once considered lowly manual work into tastemaking occupations.

This idea was also explored at the 2015 Venice Biennale of Art in a show curated by the Italian designer and architect Aldo Cibic at the Venice pavilion. Cibic was a founding member of the Memphis group, the Italian design collective set up in Milan in 1982. For his Venice Biennale exhibition, Cibic looked at how craftsmanship in Italy’s north-eastern Veneto region was cross-fertilising with technology. He profiled an LA-based eyewear maker whose owners trekked to a tiny village in the Dolomites to get their products made.

Traditional craftsmanship faces multiple pressures. Like the wider luxury goods industry, it cannot afford to ignore millennial buyers or fail to engage them on social media.

Some craft-based businesses also struggle to recruit enough younger people with the necessary intricate manual skills to replace an ageing workforce. Exhibitions such as Homo Faber celebrate the traditions of the past while acknowledging the challenges of the future.

Venice has always been a special place for collectors, and three mighty modern collections are celebrated in the city this summer.

The Peggy Guggenheim Museum, established after her death in 1979 in the former home of the great collector, is well known to art lovers visiting the city. This year, the museum is mounting a special exhibition to celebrate the 70th anniversary of an unusual Biennale event: the 1948 display of the cream of Peggy Guggenheim’s modern art treasures in the Greek pavilion.

It was a seminal exhibition, a moment when postwar Europe had a chance to see the latest international artistic developments, especially the artists Guggenheim had brought from New York in the war years — many of whom would become the titans of the late 20th-century art.

As well as documents, photographs and plans — including a model of the pavilion’s interior, with a layout designed by architect Carlo Scarpa and overseen in meticulous detail by Guggenheim (pictured above, adjusting Alexander Calder’s “Arc of Petals”) — the show reunites works from the original display. Some of these are still in the museum’s collection but others were gifted by Guggenheim to other institutions — for instance, the Tel Aviv museum — and now return to Venice on loan. Guggenheim herself was delighted with her pavilion: “I felt as though I were a new European country,” she declared.

Oligarch and collector Leonid Mikhelson has established a Venice branch of his Moscow-based V-A-C Foundation, which he launched in 2009. This month it begins a series of special exhibitions that showcase the V-A-C collection, a trove of international modern and contemporary work that ranges from Modigliani to Gerhard Richter, Francis Bacon to Bridget Riley, and includes sculpture, photography, video and other genres. The series is called The Explorers: in this first part, the “explorers” (curators) are the artists James Richards and Lynette Yiadom-Boakye, with curator Iwona Blazwick, director of London’s Whitechapel Gallery, where this series of exhibitions was first seen in 2014-15.

The third modern Medici with collections on display this month is François Pinault, whose Venice museums — at the Dogana and the Palazzo Grassi — host regular programmes; most recently, Damien Hirst’s Treasures from the Wreck of the Unbelievable. This season, Palazzo Grassi showcases some 100 works from Pinault’s own collection from the 1970s onwards, together with pieces on loan from the Folkwang Museum in Essen, under the title Dancing with Myself. The focus of the show is on the artist as actor and performer in her/his own work, and includes Claude Cahun, LaToya Ruby Frazier, Gilbert & George, Urs Fischer — whose untitled work from 2011 (above) will be feature in the show — Cindy Sherman, Alighiero Boetti and others. 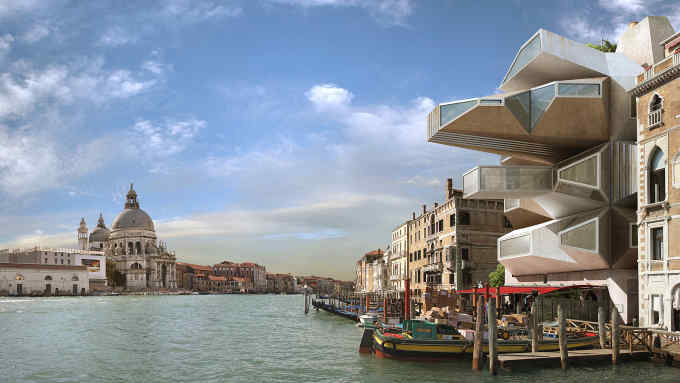