In a new series, FT writers compete to improve their London Marathon times

We caught up with the Fit Hacks after the Marathon. Listen to the podcast.

Most of us want to be fit. Science tells us that being healthy will boost productivity and aid happiness, but somehow, we can’t seem to get there.

Many of us are familiar with the sense of failure (and comfort) that comes from Netflix binges or being glued to a laptop in our active wear. Why do we find it so hard to be fit? Why do we give up? Can technology save us, or is it part of the problem?

We are determined to find out. Welcome to Fit Hacks. We will spend the next 12 months competing to become fitter, healthier and faster — and we want FT readers to help. Please leave us your tips, rituals and wisdom for improving fitness in the comments field below.

In the red corner is Patrick McGee, the FT’s German industry reporter based in Frankfurt. Patrick is representing industrialists, Canadians, extreme sports people and trail runners. His biggest fitness weaknesses: poor attention span, getting excited, taking on too much then injuring himself.

In the green corner is Laura Noonan, the FT’s investment banking correspondent in Dublin and London. Laura is competing on behalf of women, the financial industry, the Irish, and slow runners who are too scared of wildlife to venture off city streets. Her biggest fitness weaknesses: chocolate, a fear of leaving her comfort zone and an insane travel schedule that is only going to get worse.

Both of us will run the London Marathon on April 22, which will help us to set a benchmark. Look out for our post-marathon catch-up podcast next week.

Patrick I have run nearly 20 marathons or “ultras” over the past decade, with a marathon personal best of 3 hours 14 minutes in 2012. After switching predominately to trail ultras, which involve a lot more hiking and sandwich stops, my 2017 PB for a road marathon was 3 hours 57 minutes. My secret weapons for endurance training include a dog that never gets tired and a library of audiobooks that distract me from the monotony of long runs.

In 2016, I took readers on my journey to conquer the Ultra Tour Monte Rosa, a 116km race in the Alps that I spectacularly failed by tumbling over a cliff 25 hours into the race. A second attempt a year later proved to be another failure, this time from lack of training. Still, with my wife finishing the race last year, in under 36 hours, I learnt a powerful lesson that will prove applicable to any competition with Laura: never underestimate 5ft 4in women.

Laura I have shuffled around almost 10 marathons, with a personal best of 4 hours 52 minutes in 2012, just before I moved to London and began training almost exclusively on the flat banks of the river Thames. In the past four years I have raised more than €10,000 running marathons in Dublin, London and Istanbul for autism-related charities in Ireland and the UK.

In London, I am a lax member of GoodGym, which mixes runs with good deeds for community projects and pairs runners off with elderly “coaches” who offer motivation and a friendly cuppa mid-run.

I will be running London in GoodGym red to shamelessly channel the #redthunder support from the many GoodGymers who’ll be dispensing jellies and encouragement throughout the course.

Our fitness levels will be tested and recorded by professionals. Then in April 2019, we will run the London Marathon and take the same tests to determine which of us has improved the most, and we will record our progress in this series as we go.

The winner will be determined by the percentage by which their running speed has improved, as well as who meets their goals.

We want this column to be useful, so we will use whatever tools we can find, challenging each other to monthly health, fitness and running-related feats along the way.

We will try out the latest apps, take cues from readers and report on what helps or hinders us.

Every fortnight we will consider ways to keep motivated, the latest gear, or maybe a stolen tip or insight. Our battle will be one of physical fortitude, mental endurance and aspirational narcissism.

We will also report on what banks and businesses are doing to promote healthy living, team spirit and good old-fashioned competitiveness.

As well as the ultimate London Marathon test in 2019, each of our reporters has set out specific goals:

Patrick Run a marathon in under three hours, compete in a swimming race, learn to competently row and fit into a suit tailored in Hong Kong some years ago after six months of boxing training. May also make another attempt at the Ultra Tour Monte Rosa, which through some act of divine charity has been shortened to a mere 100km.

Laura Break a 4 hour 30 minute marathon, complete a triathlon, conquer fear of animal-infested trails, and find a training regime that prevents me from turning into a blimp after I move to the food paradise that is NYC. Also, raise lots more money for autism charities by running Dublin and New York marathons a week apart. 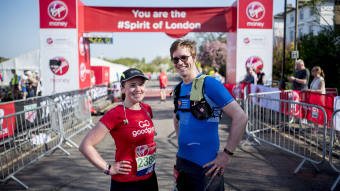