Is Brexit an opportunity for Irish law firms?

These are good days for Irish law firms as a resurgent economy drives dealmaking and foreign investment. Professional advice is in high demand, say senior legal figures, and top lawyers are enjoying inflation-busting pay increases. But the prospect of a “no-deal” exit of the UK from the EU and growing global trade tensions are threats to a sector that is heavily exposed to any volatility in international markets.

Right now the mood in business law circles in Dublin is “cautiously optimistic”, says John Cronin, a partner at law firm McCann FitzGerald. “But [lawyers are] aware there are external forces that could, frankly at any time, cause disruption to that situation. We depend — in terms of confidence, investment and perspective — on world trade and its continued good health.”

A decade after the financial crisis that led Ireland into a humiliating international bailout, the country is on the cusp of full employment and the economy is forecast to grow 5.6 per cent this year and 4 per cent in 2019. Lawyers say demand for legal services is driven by accelerating commercial and residential property markets, a rise in mergers and acquisitions, increased private equity investment, Europe’s new data privacy regulation (GDPR) and intense activity in aviation leasing and financial services.

The flow of residual work from the crash of 2008 has abated, says Ciarán Rogers, head of finance at law firm A&L Goodbody. “It’s coming more into the rear-view mirror now. A lot of the focus is clearly, obviously, now on new lending rather than restructuring.”

Data from IDA Ireland, the national inward investment agency, point to resilience in the country’s foreign direct investment-dependent economic model, despite pressure from the EU over its business-friendly corporate tax regime and US president Donald Trump’s move to cut US business taxes. Ireland secured 139 new employment projects from global companies in the first half of 2018, up from 114 the year before.

Tim Scanlon, chairman of law firm Matheson, says global companies that before Brexit might have directed investment toward the UK are looking at other locations. “Ironically pre-Brexit, the UK had become a much more competitive jurisdiction for that kind of inward investment and probably enjoyed an edge on some of the softer factors that you’d associated with that kind of decision-making.” But the uncertainty related to Brexit has led to a swing away from the UK.

With the UK and the EU far apart in Brexit talks, political turmoil in London has stoked anxiety that failure to strike a deal will hit Ireland hard by disrupting deep, centuries-old trade links. “Brexit is probably the seminal issue for Ireland and the Irish economy,” says Brian O’Gorman, managing partner at law firm Arthur Cox.

Still, the prospect of Brexit has created fresh business opportunities for Irish law firms. According to IDA Ireland, 21 UK-based financial institutions plan to establish or expand Irish operations, which will necessitate cumbersome approval from regulators in Dublin. Prominent among those that have publicly declared such plans are Barclays, Bank of America, Citigroup and JPMorgan. Senior Irish lawyers say privately that many more institutions, particularly in the funds sector, have entered an authorisation process with Ireland’s central bank.

Overall, lawyers have seen more uplift from plans for Brexit than negative spillover. “We’re getting the Brexit upside now without having to pay any Brexit price,” says Declan Black, managing partner at law firm Mason Hayes & Curran. The risk may be greater from any long-term economic stagnation after the UK leaves than a full-blown chaotic Brexit, he adds. “In a crisis there’s legal work to be done, albeit at lower rates and unpleasant work. The law responds to a crisis but not necessarily a slowdown.” 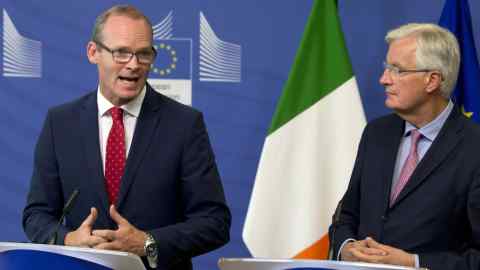 Brexit has also spurred efforts by Irish lawyers to establish Dublin as a hub for European commercial law if international companies decide to direct legal activity away from London, their traditional jurisdiction of choice. “Most of the legal professionals [will be] pressing the government to invest more in our court systems to facilitate that,” says Bryan Bourke, managing partner at law firm William Fry. “When you look at the statistics for the value to the economy, there is real opportunity to create jobs — and increased jobs means increased tax [revenues].”

UK solicitors that have registered in Ireland since the 2016 Brexit referendum.

On this front, Ireland has the advantage of being a common law jurisdiction, like the UK. But it faces potential competition from Germany, France, Belgium and the Netherlands, where moves are in train to establish English-language courts.

Lawyers in the UK have also directed their gaze towards Ireland. Concern about the possible loss of the right to represent clients in EU courts has led more than 1,600 UK solicitors to register in Ireland since the UK’s 2016 referendum on Brexit. Similarly, several law firms with UK operations have started to develop a presence in Dublin, among them Pinsent Masons, Simmons & Simmons, DLA Piper, Covington & Burling, Lewis Silkin, Fragomen and Tully Rinckey. “These firms are looking to hire people at partner level and downward,” says Mr Bourke.

In such circumstances, upward pressure on salaries is inevitable. As well as with each other, legal firms are competing for lawyers with regulators and businesses’ in-house legal departments, says Mr O’Gorman at Arthur Cox. Pay inflation in professional services is running at about double that in the wider economy, he says. “That’s been the order of the day for the past few years.”

View from the top: six Irish managing partners on strategy, competitors and Brexit

Declan Black, a litigator and insolvency lawyer, believes Brexit will shake up the Irish legal market. Brexit, he says, has acted as an “accelerator” in law firms’ thinking about Ireland. “There will be two primary strategies: opening a new office, using local talent supported by UK lawyers; or some firms will attempt to make a combination.” He is concerned about the impact of Brexit on the wider economy. Mason Hayes & Curran is the only big Dublin firm to release its revenue figures: in the first half of 2017 turnover fell 1.2 per cent on 2016, down to €76m because of negative sentiment among clients.

Bryan Bourke took up his current role in 2014 after six years as the firm’s head of corporate and mergers and acquisitions. He still undertakes legal work for key clients and led the team that advised Ireland’s Department of Finance on its initial public offering of Allied Irish Bank last year. Mr Bourke says it is only now, faced with substantial business uncertainty, that companies with UK operations are making serious moves to relocate. “Almost immediately following the Brexit vote, inquiries from UK law firms and regulated financial services institutions started to roll in,” he says. He adds that as the autumn begins, the firm is seeing “much more in terms of real activity — instructions on moving operations to Dublin”.

Barry Devereux spent 10 years in London and Singapore as a corporate and mergers and acquisitions lawyer with Clifford Chance before returning to Ireland to join McCann FitzGerald. He became managing partner in 2015, and now brings his experience to bear helping his firm target big international companies setting up operations in Ireland. The firm is known for its finance and funds-focused work, and in 2017 advised Greencoat Capital on its acquisition of Irish wind farms using a complex “yieldco” financial structure. Mr Devereux does not believe his firm, despite its international focus, will be immune to the UK’s departure from the EU. “Brexit will inevitably lead to uncertainty for business, which in turn will lead to a holding back of investment and knock-on effects for all market players, including law firms,” he says.

Prior to becoming managing partner, Michael Jackson spent 10 years running the firm’s financial services practice. It makes sense, therefore, that a reorganised and refocused finance team is at the heart of Matheson’s mission. The disintermediation of the banking system has meant large-scale corporate lending increasingly comes from more varied sources, including asset managers and specialist funds. Matheson has moved finance lawyers out of silos linked to the old banking system to reflect these changes. This has enabled them to advise across more products and for a wider spectrum of clients. Mr Jackson says keeping his team happy is important. “We will see increased competition from firms that have so far not been in the Irish market,” he says.

While his competitors point to a strong pipeline of Brexit-related work from relocating financial institutions, this accounts for less than 5 per cent of Arthur Cox’s revenue. Despite the market turbulence, the firm retains a focus on its Irish corporate client base. Brian O’Gorman believes Ireland should seize the medium-term opportunities. “We see financial services as a long-term opportunity post Brexit with significant opportunities for Dublin to grow as a financial centre,” he says.

Julian Yarr has been managing partner of A&L Goodbody since 2010. Previously, he ran its London office and recognises the competition for legal talent. When Simmons & Simmons opened a funds-focused Dublin office this year, it poached a financial services team, including two partners, from A&L Goodbody. “We have seen a number of foreign law firms entering the Irish market,” he says. “Many are focusing on niche sectors, so we don’t see this as a serious threat to larger full-service firms.”