Take a trip that makes a difference...

...from Sri Lanka to Nepal

In Nepal, philanthropy on the rise

If you know the fabulous, maximalist Shinta Mani hotels in Cambodia, then you probably know of Bill Bensley, the Harvard-educated architect who created them. Since the first Shinta Mani opened in Siem Reap, there has always been the Shinta Mani Foundation alongside it, which has provided Cambodians in need with everything from free education and healthcare to microloans, hospitality jobs and training. When Bensley opened Shinta Mani Wild, his (way) out-there camp in the remote South Cardamom National Forest, the remit shifted to focus on wildlife: it funds a team of armed rangers overseen by the local NGO Wildlife Alliance, who patrol for illegal poachers and loggers.

Bensley’s known in the travel industry for actually putting his money where his mouth is (at Shinta Mani Wild he has committed to a lifetime of financial assistance to eight rangers, whether the camp turns the profit to supply it or not). So as he prepares to open Shinta Mani Mustang, his extremely buzzed-about new hotel in Nepal, in May, it’s no surprise to learn he made a point of partnering with like-minded owners: its Pasang Lhamu Foundation – named after Pasang Lhamu Sherpa, the first Nepalese woman to ascend Mount Everest – invests in empowering marginalised women and children from Nepal’s high mountain communities through multiple channels: healthcare and hospital support, education and scholarships, vocational training. Best of all, perhaps, it prioritises Nepalese women climbers in its support of mountaineering endeavours (which includes funding a permanent rescue team). shintamani.com; Shinta Mani Mustang will open in April

In 2016 Will Jones, founder of niche Africa-travel specialists Journeys by Design, set up Wild Philanthropy. The purpose was to create a streamlined and straightforward way for his clients to donate to the conservation and community-development projects that directly enrich their travel experiences. It works with high-impact conservation partners, providing grants, fundraising and technical assistance. Best of all is the model’s efficacy: operating costs are covered by Journeys by Design, so 100 per cent of your donation makes it to projects on the ground.

It also has an impact- investment arm, Tekula Capital, which has incubated, among other launches, Wild Expeditions Ethiopia, now one of that country’s leading tour operators and whose employment schemes help alleviate poverty in local communities. All of which are good reasons to book your travel with Journeys by Design, and if you’ve the means, to consider its Rare safaris – very off-track itineraries that include a flat $5,000 “environmental pledge” that is funnelled directly into Wild Philanthropy. We like the sound of wild camping on the Red Sea coast in Eritrea, and we really like the sound of our travel covering significant chunks of park fees in the likes of Rwanda, Congo and the DRC. wildphilanthropy.com; journeysbydesign.com, Eritrea safari from $9,750pp

The long walk to carbon-neutral

Former Coca-Cola and Cirque du Soleil C-suite executive and board member Craig Cohon reckons he’s flown more than four million miles in his lifetime. Keen to redress his Sasquatch-sized carbon footprint, on 3 January he is launching Walk It Back – a five-month awareness-building project during which he’ll seek to offset his life’s carbon output, dating back to 1963. His on-foot journey from London to Istanbul will cover 4,100km and 14 countries, broken up into 25-30km daily walks.

He’ll be joined most days – by a mayor, local activists or anyone who’s keen to make a donation and accompany him for a stretch. The goal: to raise public awareness in every place he visits for accelerating carbon-removal efforts across all sectors, from architecture to agriculture. You can sponsor him for a pound or a million, or donate directly to any number of the vetted projects that Walk It Back supports. walkitback.org

For the love of Sri Lanka

The three Sri Lankan hotels that make up the Resplendent Ceylon collection vary widely, from Ceylon Tea Trails (the island nation’s first tea bungalow-turned-stylish hostelry) to Wild Coast Tented Lodge, a clutch of futuristic-looking tents in the buffer zone of Yala National Park, which is famous for its leopard population. Malik Fernando, scion of the founding family (also the family behind the Dilmah tea brand), takes conservation in his country seriously.

Since Resplendent’s inception in 2005, 15 per cent of profits have funnelled directly into the family’s two foundations. The MJF Foundation supports underprivileged Sri Lankans via scholarships, holistic development programmes for differently abled children, livelihood assistance (to more than 1,000 families in the vicinity of their hotels) and an entrepreneur sponsorship for small businesses. Dilmah Conservation is all about biodiversity conservation and climate education; its Centre for Climate Change Research and Adaptation is one of the only private-sector facilities of its kind in the world. Next up: building and funding a permanent leopard research centre at Wild Coast Lodge, which will house five full-time naturalists and biologists, along with the occasional visiting scientist or big-cat specialist. resplendentceylon.com, from $532 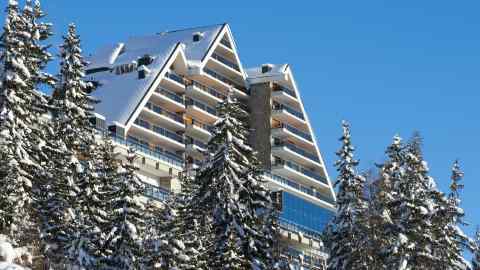