While most of the world contemplates with dread the economic destruction wreaked by the coronavirus, for many Argentine entrepreneurs it is just one more challenge to overcome.

Accustomed to dealing with crises on an all-too-regular basis, many start-ups have succeeded in turning misfortune to their advantage. Argentina’s last major economic collapse in 2001-02 served as a catalyst for the rise of some of its most successful companies.

In fact, Argentina has been on crisis footing since long before Covid-19; it is still suffering from a debilitating devaluation in 2018 that fuelled one of the highest inflation rates in the world and could lead to the country’s ninth sovereign debt default.

“You either adapt or die,” says Ezequiel Calcamari, president of Argentina’s association for entrepreneurs. “Being an entrepreneur in Argentina isn’t for just anybody. Maybe they’re not heroes, but almost.”

Even so, Mr Calcamari is convinced that there is “a great opportunity” for investors in Argentina today: “it’s cheap”, he explains, referring to the devaluation that has made the country competitive in dollar terms.

Argentines never fail to underline the high quality of their entrepreneurial talent — a result of good universities and strong foreign ties, as well as a bustling “ecosystem” of start-ups in Buenos Aires that has spawned numerous successful enterprises from which to learn.

On the other hand, start-ups must still confront Argentina’s complicated and punitive tax rules, inflexible labour laws and strict currency controls — all of which pose serious barriers to business.

A widely applauded law that simplified the creation of new companies, implemented by the previous government, has been suspended by the new administration of Alberto Fernández. “Argentina is wasting its great potential. How many countries wouldn’t die to have what we have — this is a hotbed of entrepreneurs,” says Mr Calcamari.

Even so, Gustavo Markier, chief executive of Plataforma 10, one of the fastest-growing companies in Argentina in recent years, sees reasons for optimism.

While he admits that his travel website, founded in 2001, is feeling the effects of the coronavirus crisis, with the help of financing, he says, his company could still expand “several times over” by growing in the rest of the region. “We have grown in Argentina, with the Argentina that we have — and we could grow much more,” says Mr Markier, whose company had a compound annual growth rate of 63.3 per cent between 2015 and 2018, according to the FT Americas ranking of fast-growing businesses in the region, compiled with Statista, a research company.

The entrepreneur identifies a lack of investors for “scale-ups” as the biggest challenge — especially for those looking to expand beyond national borders — with more financing opportunities available for smaller companies just starting out.

The Argentine banking system has its back turned on start-ups

“The Argentine banking system has its back turned on start-ups,” says Mr Markier. “Successive changes in the rules of the game, hyperinflation, recession and other economic storms have generated formidable training and resilience for Argentine entrepreneurs. But restricted access to capital is what has really prevented them from transforming that potential into greater added value.”

Marta Cruz, co-founder and managing partner of NXTP, a venture capital fund in Buenos Aires, points out that the macroeconomic headwinds in Argentina are “just one more” challenge for start-ups.

“It doesn’t matter where a company is based, the important thing is where its revenues are generated. And businesses in the tech sector are able to serve multiple markets from anywhere in the world,” she says. Ninety per cent of the companies financed by NXTP also have operations abroad.

Here, Argentina has form. It produced a crop of “unicorns” — tech companies valued at more than $1bn — in the wake of the country’s 2001-02 crisis. Mercado Libre, Latin America’s leader in ecommerce, is now Argentina’s most valuable company with a market capitalisation of nearly $30bn.

With the economy now in its third year of recession and on the brink of a debt crisis, a similar phenomenon may be under way, suggests Pierpaolo Barbieri, who in 2017 founded Ualá, a fast-growing mobile payments app. “The disruptions created by crisis are fertile ground for innovation,” he says. “Teams, capital and great ideas can coalesce at a time of crisis.”

Get alerts on Argentina when a new story is published 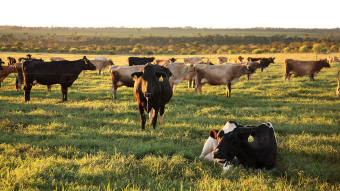