‘People are not buying houses and not buying cars. It’s a sign of things to come’ — Osborne

David Cameron has warned that a vote to quit the EU would be “irreversible” as opinion polls suggested that momentum towards a Leave vote may have halted.

The UK prime minister and George Osborne, chancellor, gave a series of interviews highlighting the economic risks of a Leave vote when the country goes to the polls on Thursday, as low-key campaigning resumed following the murder of the Labour MP Jo Cox last week.

Mr Osborne told ITV’s Peston on Sunday that the economic impact of a Leave vote could be even worse than the central forecast by the Treasury that the economy would be 6 per cent smaller than if Britain chose to remain in the EU.

“It could be quite a lot worse than that”, he said. “People are not buying houses and not buying cars. It’s a sign of things to come.”

Mr Cameron accused the Leave camp of trying to diminish the advice of “experts” in the debate, comparing it to ignoring the advice of a mechanic who advised that a car was defective. “Would you take a risk with your family getting into a faulty car? No you wouldn’t,” he told the Sunday Times.

Mr Osborne backed the idea of a monument to Cox “celebrating what she achieved in her short life”. The House of Commons will be recalled on Monday for tributes to the Yorkshire MP.

The suspension of the campaign put the brakes on momentum built up by Leave in the past two weeks and has allowed Mr Cameron and Mr Osborne — accused by critics of desperation in recent days — to regroup.

A Survation poll for the Mail on Sunday showed the Remain camp moving into a 45-42 point lead, YouGov in the Sunday Times gave Remain a 44-43 lead; while Opinium in the Observer put the two sides level on 44 each.

Some of the sampling was carried out before Cox’s death, with pollsters suggesting the surveys were reflecting a typical swing back to the status quo as polling day approaches. The FT’s poll of polls shows both sides on 44 per cent.

Michael Gove, the Eurosceptic justice secretary, said if the country voted to Leave he expected Mr Cameron to stay on as prime minister to carry out the will of the people. That included the suggestion by the Leave campaign that Britain should spend money it would otherwise give to Brussels to boost spending on the NHS and to cut value added tax on fuel.

News in-depthBrexit
What will happen if the UK votes for Brexit? 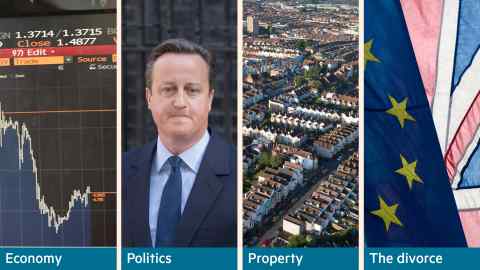 He rejected the idea that Mr Osborne would have an emergency Budget to close a hole in the public finances caused by the economic shock of a Brexit vote.

Mr Gove denied that the Leave campaign was inflaming community relations with its focus on immigration, arguing that only by taking back “control” over Britain’s borders could the public be reassured on the issue.

However, he said he had “shuddered” at a poster unveiled last week by Nigel Farage, leader of the UK Independence party, showing a group of desperate migrants in Slovenia under the headline “Breaking Point”.

Mr Cameron said in the Daily Telegraph: “Are we going to choose Nigel Farage’s vision — one which takes Britain backwards, divides rather than unites, and questions the motives of anyone who takes a different view?

“Or will we, instead, choose the tolerant, liberal Britain: a country that doesn’t blame its problems on other groups of people, one that doesn’t pine for the past, but looks to the future with hope, optimism and confidence? I think the answer will determine what our country feels like for a very long time.”