Ageism in the workplace ‘starts at 40’ for women

They say “life begins at 40”. Unfortunately for women, this is also the age where a top academic says age discrimination in the workplace starts to occur.

At the Longevity Forum in London last month, Professor Lynda Gratton said that ageism at work began at 40 for women and 45 for men. Many employees’ careers peaked at these ages; they were no longer considered for promotion or training.

In the UK, age is a “protected characteristic” in the same way as gender, race or sexual orientation. By law, you should not suffer discrimination because you are too old, too young, or even too middle-aged.

Unfortunately, some employers pay little heed to this in the knowledge that the risk of legal action is small. In redundancy programmes, it is commonplace to target older employees, who are often perceived as more expensive to keep in employment than their younger counterparts.

Prof Gratton, co-author of The 100 Year Life: Living and Work in an Age of Longevity has founded the Hot Spots Movement to counter this trend. Set up to enable companies to “prepare for the future of work”, the consultancy encourages employers to future-proof their organisations and make sure their inclusion and diversity strategies are fit for purpose. However, until employers catch up, employees and job applicants have to age-proof themselves.

Research by the Centre for Ageing Better (CfAB) in September indicated the size of the problem. Nearly half of those over 50 thought that their age would disadvantage them if they applied for a new job and a third thought there were fewer opportunities for training and progression with their existing company.

Yet skills shortages are changing attitudes to ageism, and many employers are beginning to question their recruitment policies.

“Companies need to wake up to the opportunities of an ageing workforce,” says Anne Willmot, Age Campaign director at Business in the Community. “Employers can now have up to five generations working together in the same workplace. They need to take action now as by 2022 there will be 800,000 more older workers and 300,000 fewer 16-24 year olds entering the workplace.”

Currently, only one in three UK workers are aged over 50, and around 1.5m people a year are leaving the UK workforce. The shrinking pool of talent is likely to make the retention of experienced and committed employees essential.

Andy Briggs, chief executive of Aviva Life in the UK and Ireland, says businesses are going to struggle if they don’t embrace older workers and should make better efforts to retain and retrain them.

The leader of BITC’s “Age at Work” leadership team, Mr Briggs has been appointed by the government as the business champion for older workers. Jobseekers can use the BITC website to identify companies that have made a public statement about wanting to recruit the best possible people regardless of age.

The view that companies should be more inclusive of older workers is backed by recent research by the Harvard Business Review which claims diversity is the key to unlocking innovation in a business. Diverse companies — those that were open to workers of all backgrounds and ages — were 45 per cent more likely to report growth in market share.

According to Aviva, championing older workers in its life insurance division contributed to an increase in new business, which grew by 32 per cent in the first half of 2017 compared to the previous year.

“By understanding the needs of our over-50s customers and building a workforce that understands, empathises and has the necessary skills to deliver exceptional service, we’re delivering sector-leading customer advocacy,” says Mr Briggs.

Lindsay Cook
Should you lie about your age on your CV? 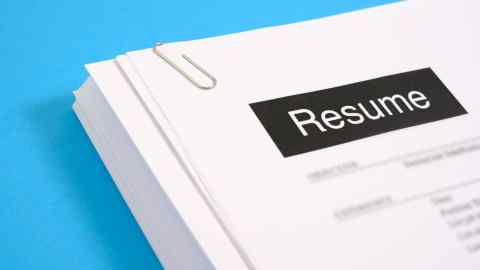 The company is also increasing retention and performance rates by helping its older workers to progress and develop. In 2017, the number of existing employees making a vertical or horizontal move increased by nearly 45 per cent.

The number of new hires aged 50 and over jumped 33 per cent in 2017 and the total proportion of over-50s employed has risen by 6 per cent — halfway towards the company’s five-year target.

Companies should also be aware that standard recruitment practices can unconsciously discriminate against older workers.

Applied, an online recruitment agency, works to remove age-identifying information from applications and gives applicants written tasks as part of its recruitment process. It has found that more than half the successful applicants would not have been hired by traditional CV-based selection methods.

Barclays launched its Bolder Apprenticeship programme to target those who had retired early or faced redundancy, and HM Revenue & Customs recently held an “Age Summit” where it presented data to challenge age stereotypes.

Video: Should you lie about your age on your CV?

Rich Bristow, director at Astute Business Mentors, a business consultancy that uses retired senior managers, says that Barclays, Boots, Aviva and the Co-op all plan to increase the number of over-50s they employ by 12 per cent by 2022. “These plans are worthy of support, but anecdotal evidence suggests the employment of older people by companies tends to be in the low- to middle-income ranges,” he says. “This leaves a group of retirees — the ex-senior employees and board members — with no discernible organisation to turn to for work-based activity.”

As the pensions system becomes less generous, another reality of living for longer is that we will need to work for longer.

The Chartered Institute of Personnel and Development (CIPD) found over 55s were now bracing themselves to continue working to the age of 70. “It’s shocking that, despite a large proportion of UK workers planning to work past the age of 65, employers are so underprepared to meet the needs of a maturing workforce,” says Charles Cotton, pay and reward adviser at the CIPD. “Older workers offer vast experience and knowledge, and can also act as mentors to young people in the workplace.”

Lindsay Cook is co-author of “Money Fight Club: Saving Money One Punch at a Time”, published by Harriman House. If you have a problem for the Money Mentor to look into, email money.mentor@ft.com