The push for mother-tongue teaching in Africa

Godfrey Chuo still remembers the reaction of his primary school students three decades ago when, as a young teacher in north-west Cameroon, he switched from explaining ideas in English — the official language of instruction — into his mother tongue, of Kom.

“The children were so excited and motivated,” he says. “When they are taught in their own language, they work even beyond what the teacher asks. It is fantastic.”

By contrast, Chuo has found that when pupils start learning in a foreign language, their education slows down. “They learn better in their first language, the language of the heart, which is not learnt but inherited from their parents,” he finds.

In fact, across many lower-income countries around the world — especially those in Africa — there is a strong overlap between poor overall educational outcomes and the predominant use of a former colonial language in schools (see chart). This applies to the use of English, French, Portuguese, Spanish or Arabic.

Some parents and policymakers still believe immersion in one of these languages in school is pivotal to their children’s future fluency and success. But others argue that pupils struggle when learning in an unfamiliar tongue often not spoken well by their own families, communities — or even by the teachers themselves.

By achieving greater fluency in their first language, instead, they can grow in confidence, affirm their identity and establish the building blocks to develop a deeper capacity to learn, proponents argue. It can even enable a switch to another language for schooling, in later primary years.

The mother tongue is the language of home, of play, of comfort and comprehension

As Barbara Trudell, a consultant with SIL, a faith-based non-profit that supported the Kom programme in Cameroon, points out: “English is the language of incomprehensible content, of punishment for wrong answers, of examinations that determine one’s future. The mother tongue is the language of home, of play, of comfort and comprehension. When the students begin to interact with a teacher in the mother tongue, they visibly loosen up.”

Rajesh Ramachandran, a researcher at Heidelberg University, has also examined the legacy of colonial systems and observed a positive effect from introducing mother tongue tuition — including Kom in Cameroon. “You can be very successful in getting children into school but, once in the classroom, it’s going to be challenging preparing them for the world if they can’t read a sentence,” he says.

In international research published by Unesco, Ramachandran calculated that 69 per cent of adults with five years of schooling in systems that used indigenous languages could read an entire sentence, compared with 41 per cent in colonial or mixed language systems. After controlling for age, religion and place of residence, this gap in literacy outcomes jumped from 28 to 40 percentage points.

Ironically, apartheid-era laws designed to discriminate against black South Africans in Natal province — by insisting that they learnt only in local languages — had a positive effect. They resulted in a higher literacy rate overall when compared with the country’s other provinces.

Since that time, other nations have experimented with switching to dominant local languages, at least in early primary years.

In Senegal, for example, USAID, the US official aid agency, has tracked improved outcomes through Lecture pour Tous, a programme that offers instruction in Pulaar, Seereer and Wolof before switching to French for older students.

Similarly, Ben Piper, senior director for Africa education at RTI International, a non-profit research institute, has measured important gains in literacy in schools in Kenya that switched from early years teaching in the national languages of English and Kiswahili to local tongues.

But Piper cautions that there are few rigorous studies on the overall outcomes. Many factors can reduce the apparent benefits, including the complexity of local languages, the quality of teachers (who may lack fluency), and the often poor quality of resources including textbooks — especially in languages with little written tradition.

At meetings 25 years ago, if somebody talked about mother tongue education, people snickered and said they were extremist

Others highlight the difficulties of implementation in countries with multiple local languages — the choice of which can inflame ethnic and political tensions. Steve Walter, an associate professor at Dallas International University, points to “a political tug of war” in East Timor, where he supported a shift but “a strong, outspoken element still wants Portuguese”.

Nonetheless, Walter sees a move towards greater interest and debate in the field. “When I started attending comparative international education society meetings 25 years ago, if somebody talked about mother tongue education, people snickered and said they were extremist,” he says. “Now, there will be 10-20 sessions devoted to the issue. There’s a lot more openness.”

Cameroon’s own experiment in mother tongue schooling in the north-west has faltered with a civil war that has closed schools in the region for the past three years. But Chuo, who is currently based in the capital Yaoundé, remains determined.

He is training a new generation of teachers in his techniques and hopes to open complementary classes for Kom émigrés. “The communities are asking me to come back and do something,” he says. 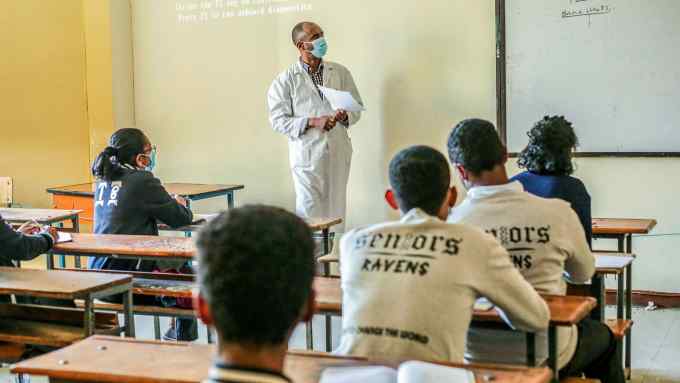