This is the second in a series of sketches in which the Financial Times examines the markers of British visual identity after the UK’s vote to leave the EU.

Many aspects of British self image stem from the nation’s landscape, skylines, streets and designs — yet virtually every aspect has been affected by globalisation, government cuts, shifts in the economy and in agriculture, and threats, real and imagined, from within and without.

This is an attempt to analyse how those designs are changing and whether we need new ones — and new ways of describing them.

The light emanating from a red phone box in the evening was once a symbol of refuge, a beacon and a place of connection to the world.

An indispensable part of the UK streetscape, what was once a symbol of a remarkable technology has become a piece of heritage. The last remaining phone boxes survive not because they are needed but rather because they are in conservation areas and are protected, like the buildings around them.

The history of this most British of icons is intriguing, a cocktail of influences and cultural markers. The design of the classic kiosk, the K2, dates from a competition launched in 1924. It was won by the architect Giles Gilbert Scott, designer of Liverpool Cathedral and Battersea and Bankside power stations — the latter now Tate Modern.

Scott based the phone kiosk design on the unlikely model of Sir John Soane’s 1815 design for a mausoleum for his wife — the original prototype can still be seen beneath the arch of the Royal Academy. So the phone box had the memory of death inscribed in its origins. Made of cast iron — manufactured in Scottish foundries — the phone kiosk managed to combine historical allusions and the production techniques of heavy industry, a particularly British mix of high tech, engineering and nostalgia.

The red phone box became a cultural symbol, something reproduced as everything from money boxes and biscuit tins to key rings and shower cubicles. It has littered popular culture from The Ladykillers film to the cover of David Bowie’s Ziggy Stardust and is so familiar it is one of the indisputable symbols of Britain.

It is now, of course, obsolete. The ubiquity of the mobile phone has made this curious micro-architecture irrelevant to the lives of almost everyone.

Is its uselessness, perhaps, part of its appeal? The phone box belongs to an era when real attention was paid to making the infrastructure of the everyday beautiful as well as useful.

One of the country’s great architects was commissioned to create a piece of street furniture that was so elegant it became a symbol of the nation itself. It was a generous and genuinely public structure. The privatised British Telecom did design successor phone boxes but they were ugly and poorly detailed.

AnalysisBrexit
British by design: the Union Jack and the flag of St George 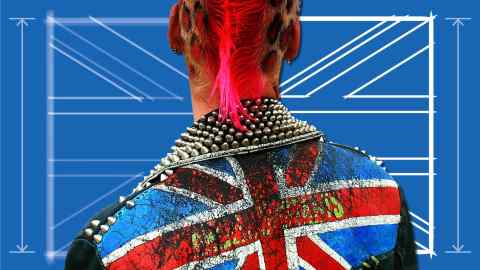 Yet is the nostalgia based on a false memory? Anyone old enough to remember feeding endless 2p coins into the slots — if you managed to find a phone that was working — will also remember the fug of stale cigarette smoke, the stench of urine, scratched graffiti, torn up, damp phone books and, in their latter days, an endless and colourful collage of cards stuck to the glass advertising local prostitutes. With a damp mulch of unidentifiable stuff making up the floor and the occasional broken pane and cut phone cord, they were often frustrating and unpleasant places to be rather than the nostalgia-pods they now appear.

In a way, the red phone box is a perfect metaphor for Britain’s sense of self — its crisis of identity. A shelter made for an obsolete technology in the heavy industrial heartlands of Scotland, beautifully designed but inspired by a Regency tomb from the year of Waterloo. A design that survives as a symbol of a lost era of care for the civic arena by a state-owned utility. It is the most eccentric marker, at once technical and nostalgic, a piece of architecture that belongs in the realm of street furniture and a symbol of a defunct typology. Beautiful but useless.

A few of the remaining examples have been turned into anything from art installations and cafés to greenhouses and even micro-libraries. The phone box survives, like so many of the more interesting aspects of the British landscape, as heritage, a part of the national identity the use of which, quite soon, will be obscure and distant.