Push back on double prejudice of ageism on top of sexism

In 2014, management consultant Bar­bar­a Lawther had just set up a call centre in Myanmar for her employer. With her CV in great shape, she decided to go backpacking and write a book. Two years on, she was out of work, applying for jobs but receiving no replies.

Something had changed and she suspected it was turning 50 — that, and allowing her hair to turn silver-grey. “I’d see jobs for which I knew I’d be ideal because I had the experience but I wasn’t even getting interviewed.”

Being denied opportunities because of age is hurtful (and often illegal), whether you are female or male, 65 or 25. While ageism is always unfair, studies find that women experience bias years before men, and more severely.

This is doubly frustrating if raising children has already slowed your career. As Jenny Galluzzo, co-founder of The Second Shift, a New York organisation, puts it: “Just when women are hitting their stride they get smacked by ageism [on top of] sexism.”

If workplaces are failing older women, what would work better?

“Leadership boot camps” for women are a possibility, says Ms Galluzzo. An­other idea is to prevent that initial hitch in women’s careers by making it “socially acceptable and affordable” for the sexes to take an equal share of family responsibilities, says Caroline Strachan, co-founder of Women at Work, a UK network.

Lindsay Cook
Ageism in the workplace ‘starts at 40’ for women 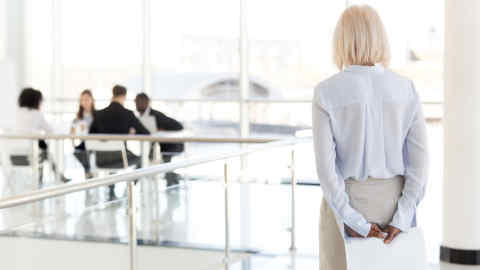 Aviva, the insurer, offers equal parental leave and a carers’ policy designed to be gender neutral. Such an approach, if widely adopted, could disrupt the narrative that casts women as “a higher-risk option for more senior positions,” says Nic Hammarling, partner at Pearn Kandola, a business psychology company.

Instead, she says, employers are nudging middle-aged women to pick up the brunt of caring for older relatives by “targeting eldercare policies at women”.

There are ways to push back at stereotyping. “If you’re keen to take on high-profile work needing lots of energy, say so clearly,” she says.

Ms Galluzzo has a similar view. She says that if life changes and you become more flexible or able to travel, “don’t put the burden on the company to see you differently”. If you miss a promotion, ask “how can you help me get the experience to succeed?” 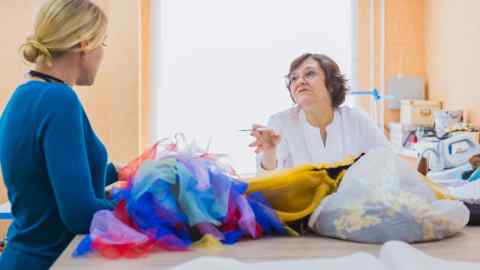 What if you keep being knocked back, or suspect that warm words about your experience are a nod to your achievements but write off your future?

“Saying, ‘how do we fix this?’ is better than demanding recognition that you’ve been wronged,” she says. Yet she also says to keep notes on “who said what and when”, because being on top of the facts makes it easier to explain why you feel pigeonholed.

Sometimes ageism is so entrenched that victims stay silent. They see it as pointless to oppose a prejudice that colleagues take for granted.

Former BBC presenter Miriam O’Reilly won an employment tribunal on age discrimination grounds in 2011, after the BBC replaced her and three female colleagues with younger presenters on Countryfile, a rural affairs programme they had helped to make popular.

Saying, ‘how do we fix this?’ is better than demanding recognition that you’ve been wronged

Ms O’Reilly says that even after her victory, “I found myself sitting at home not being given work”. Yet she believes the fallout allowed other female broadcasters to work for longer. BBC journalist Carrie Gracie notes in her recent book, Equality, that “Miriam’s victory had forced management to put more older women on screen”.

Making older women more visible matters because, as campaigner Caroline Criado Perez argues in her book Invisible Women, the design default is male when they are absent.

An example is the topic of the menopause, which is ignored by most management policies. The result, campaigners say, is that conversations about practical measures to help women manage their symptoms comfortably feel like breaking a taboo, and rarely take place.

For Edinburgh-based Ms Lawther, her reputation for competence helped her find work through former colleagues. When they call her, she says: “They see Barbara who we need for this project, because Barbara can do this job.”

Research from Stanford Graduate School of Business last year indicates that older women may, in one respect, do better than their male counterparts.

Assistant professor Ashley Martin, co-author of the study and an academic at the business school, says that when younger employees feel themselves to be in competition with older workers, the overriding stereotype is of a dominant older man — leading to conflict when those older males assert themselves. Yet when older women are similarly assertive, colleagues tend to listen more respectfully because women are considered less threatening.

“Some of the discrimination towards younger women — being criticised for assertiveness or judged less competent — doesn’t occur in the same way for older women,” Ms Martin says.