Amy Kazmin in New Delhi and Simon Mundy in Mumbai

New Delhi’s Chidambaram Hotel restaurant usually struggles to keep pace with demand for its south Indian food. But breakfast and lunch sales plunged on Wednesday after the overnight scrapping of high-value banknotes in what the government touted as a “surgical strike” against the black economy.

“I am really struggling today,” said Kumar Chidambaram, the owner. “Our sales are down by almost half.” Regular customers were being given credit but a “large number of people who are walking in with cash” were being turned away.

Indians were stunned on Tuesday night by Prime Minister Narendra Modi’s announcement that Rs500 ($7.52) and Rs1,000 notes, which account for more than 80 per cent of the value of cash circulating in India, would not be considered legal tender as of midnight.

The invalid notes, which can be deposited in bank accounts until the end of the year, are to be replaced by new currency in denominations of Rs500 and Rs2,000, with stronger security features that will make them harder to counterfeit.

Mr Modi’s government touted the move as part of a campaign against the hoarding of illicitly earned or unaccounted for income that was out of reach of tax officials — and as a strike against counterfeit money used to finance terrorist attacks.

Shares in companies that sell real estate — long the asset of choice for Indians seeking to park their ill-gotten gains — plummeted on Wednesday as companies calculated that their revenues would plunge.

Indiabulls Real Estate fell 16 per cent and Sunteck Realty 20 per cent by mid-afternoon in Mumbai, while the wider market was down just 1.4 per cent.

The latest step in a crackdown on illicit “black money” was cheered by many large businesses and young financial technology companies that said it would accelerate a shift from an untaxed, cash-based economy towards greater formalisation and digital payment systems.

Harshavardhan Neotia, president of the Federation of Indian Chambers of Commerce and Industry, said: “This is an extremely bold move . . . and will have a debilitating impact on the parallel economy in the country as well as deal a body blow to terror financing.”

It was also applauded by many middle-class Indians deeply resentful of what they believe to be the pervasive corruption of the business and political elite.

But it remains to be seen how fast the Reserve Bank of India will roll out the new banknotes, and in what quantities, when banks reopen on Thursday after a one-day closure. Initially, Indians depositing the old notes will only be permitted to take out Rs4,000 in cash.

Banks were informed of the demonetisation only after Mr Modi’s nationally televised announcement on Tuesday, and it is unclear when ATMs will begin dispensing the new currency.

Shaktikanta Das, the finance secretary, said the move had been in the works for a “very long time” and the team working on it had been kept very small.

“This is a surprise to everyone,” he said. “Only a limited number of people were dealing with this subject in government and the Reserve Bank of India. It was not known to anybody.” 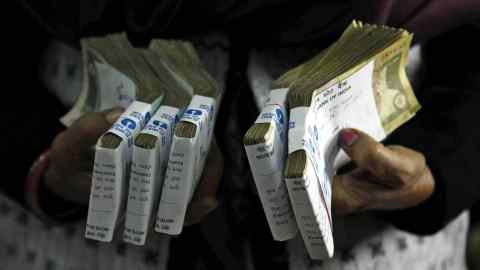 The RBI admitted that “it may take a while for banks to recalibrate their ATMs”. Once the machines start functioning again, withdrawals will be limited to Rs2,000 per person per day until November 18, when the upper limit will rise to Rs4,000.

Officials were keen to reassure people there would be enough notes, and not to trigger a run on the new currency when it is released on Thursday.

Urjit Patel, RBI governor, said: “We should be ready with adequate notes of the new series. We have ramped up production and are ready to meet the requirement in the weeks and days to come.”

However, the action has stoked fears of a liquidity squeeze that will hit small businesses and ordinary Indians unprepared for non-cash transactions — a problem set to be exacerbated by an acute shortage of smaller denomination notes.

Wasdat Ali, a Mumbai taxi driver, said: “It’s very bad. I had to refuse two customers this morning because they did not have change. We don’t have any change to give to customers. The petrol pump is also refusing to accept Rs500 notes. It’s been very difficult. The common people are suffering.”

Officials suggested that those depositing large sums of cash in banks would be closely scrutinised, presenting holders of black money with a tough choice over how to dispense with their cash.

Deepak Parekh, chairman of the Housing Development Finance Corporation, said: “This will clean up the system. It is a big, bold transformational reform.”

But some analysts questioned the timing of the demonetisation, just as the country is preparing for a tax reform expected to reduce widespread evasion.

Some suggested the move was politically motivated, intended to bolster Mr Modi’s image as a strong, decisive leader and deprive his rivals of war chests ahead of state-level elections early next year.

Rajeev Malik, senior economist at CLSA, said: “The urgency of such a dislocating, disruptive move, even though it is quite positive [in the longer term], is quite surprising because it’s not as if growth is bursting at the seams. The timing suggests it could be more than just economics.”

Additional reporting by Kiran Stacey and Jyotsna Singh in New Delhi, and Andrea Rodrigues in Mumbai