Chancellor Jeremy Hunt is looking at filling about half of the UK’s £55bn budgetary hole through a big squeeze on government spending after the next election that would impose fresh austerity on public services.

Treasury insiders said Hunt was examining freezing day-to-day public spending in real terms for three years after 2025 in the Autumn Statement next Thursday, saving about £27bn a year by 2028.

One ally of the chancellor said he was likely to accept plans set out in last year’s Spending Review, which was meant to provide average real terms growth of 3.3 per cent in Whitehall departmental budgets between 2021-22 and 2024-25. “But for the following three years there will be much more restraint,” he added.

Although the total amount of Whitehall spending would be frozen in real terms rather than cut, many cabinet ministers would be expected to find deep savings because only certain Whitehall departments are likely to be protected, such as health.

Sir Charlie Bean, former deputy governor of the Bank of England, said: “Austerity 2.0 will be even more difficult because public sector budgets are already under severe strain.”

During the 2010s, the then chancellor George Osborne introduced sweeping public spending cuts across multiple government departments as he sought to overhaul the public finances following the financial crisis.

Many public services are struggling following Osborne’s cuts and the recent surge in inflation. Nurses have voted to strike over pay and many other ballots on wages are looming, including teachers.

Now Hunt is drawing up plans to reduce the growth in public spending in those three years after 2024-25 to 2 per cent or lower, according to people familiar with the deliberations.

Calculations by the Financial Times show that if the assumed growth rate were lowered to 2 per cent, the government would save £23bn by 2027-28, the last year of the forecast that will be published by the Office for Budget Responsibility alongside the Autumn Statement.

Officials are looking at pencilling in cash spending growth of a little below 2 per cent to maintain day-to-day spending levels in line with consumer price inflation. This would save about £27bn by 2027-28, filling half of the £55bn fiscal hole that the Treasury is anticipating by that year.

Paul Johnson, director of the Institute for Fiscal Studies, a think-tank, said no one should be fooled that flat real-terms public spending plans would be acceptable. 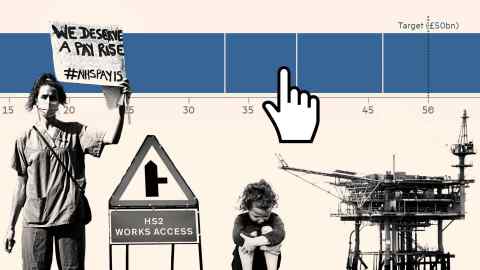 “Health spending always increases and will do over that period [after 2025],” he added. “Since it is the biggest single part of public service spending, the result will be significant real cuts for many services.”

The Resolution Foundation, another think-tank, said if the government protected the health, education, defence and overseas aid budgets from the expected freeze in real spending, other Whitehall departments would face cuts of almost 10 per cent.

Whitehall insiders said ministers hope not to have to impose another round of austerity if government borrowing costs fall, and delaying the spending freeze beyond the next election allows them to change course if the economic outlook improves.

Meanwhile, former chancellor Kwasi Kwarteng said he had warned Liz Truss to “slow down” her plans to boost economic growth, as he conceded that a more “measured approach” could have been taken.

In an interview with TalkTV, Kwarteng, who was sacked by Truss after just 38 days as chancellor, said the former prime minister had wanted to “hit the ground running” with the fast pace of her reforms.

Truss’s “mini” Budget in September focused on £45bn of unfunded tax cuts, unleashed turmoil in financial markets, and she resigned last month after the Conservatives recorded a plunge in their poll ratings.

Kwarteng, a longtime ally of Truss, admitted her government “tried to do too much too quickly”, saying he had warned Truss of his concerns. “I said . . . we were going at breakneck speed. And I said ‘You know, we should slow down, slow down’.”