For affluent clients, a pandemic, economic volatility and political turmoil have brought on a bit of shock

When the dotcom bubble burst two decades ago, psychologist William Martin started getting calls for the first time from an unexpected source. People were anxious, depressed and even suicidal, and they had one question: “Can you help me talk about money?”

He turned them down. “I said, ‘if you get hypertension or diabetes, I can help you’,” he remembers. Finance wasn’t then a part of his mental health practice, which focused on chronic illnesses. But the calls kept coming from rich investors and financial planning firms worried about staff experiencing extreme stress as they dealt with clients who had lost money.

Martin realised then that there was a profound need to bring counselling into the financial world. Today, his Chicago-based practice at The Planning Center brings psychological principles to financial planning, part of a rapidly growing school of thought that money is more than a rational issue — it is also an emotional one. The rising popularity of this approach has led to the creation of the Financial Therapy Association, founded in the US in 2009, which today has 347 members. And now the impact of the Covid-19 pandemic is generating more demand than ever.

Crises have always been good business for psychologists. What is new is the realisation that there has been a glaring gap: while wealth managers do not have the skills of a mental health counsellor, therapists rarely have training in financial planning. “Financial therapy was born around the realisation that emotions, attitudes and beliefs can get in the way of rational thinking around money,” says psychologist and financial therapist Maggie Baker, author of Crazy About Money, a study of emotions in personal finance.

Referrals to financial therapists can come from other therapists as well as financial advisers — though advisers may call them “communications specialists” to avoid the stigma around mental health. They not only work in crises but also frequently help wealth managers facilitate conversations between clients and their families on the issues of inheritance, business performance and philanthropy. Costs can run to over $1,000 per one-hour session. 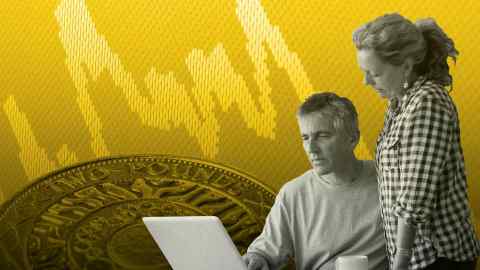 Some financial therapists come to counselling from financial backgrounds. Brian Farr was a partner in an investment management firm in Portland before becoming a therapist. “I can get people to actually look at the reality of their finances and get their fingers in it,” he says. “It’s remarkable how calming that can be. If they sit there with pencil and paper and push the numbers around.”

“I can’t tell you how many people after the fourth, fifth, sixth session say: ‘I wish I had met you five years ago’,” he says. Their fear and anxiety is real, he says, but often “it’s not connected to the reality of their finances.”

Financial therapy may have little to do with a particular money problem, but is instead a more subconscious issue that is causing stress. The root of a person’s relationship with money is very deep. “Money is a window to early trauma,” says psychotherapist Judith Barr, in Connecticut, who focused on finance after recognising the deep effect that financial stress was having on her clients. “There have been very few times that I have worked with anyone on their money relationship where that hasn’t shown up.”

The coronavirus pandemic has been especially unsettling for high net-worth clients, psychologists say, because money normally insulates the wealthy from the assaults of life. Many are noticing that for affluent clients, a global pandemic, economic volatility and political turmoil have brought on a bit of shock. “Coronavirus doesn’t care what your net worth is,” says Martin. “Many people are feeling vulnerable for the first time.”

Even if they can afford it, a person cannot just hop on a private jet and go wherever they want. “We all have fantasies about what wealth can do,” says financial therapist Marilyn Wechter, who practices in St Louis but works with clients worldwide via video chat. “The crisis has clarified what money can and cannot do. Money cannot shelter you from life not being what life has been or what we expected it to be.”

People who grew up in a house where money was never scarce are particularly vulnerable to distress if there are financial concerns, because they may never have developed coping skills for them. This can lead to what therapists call “catastrophising”, which is panicking that a relatively small loss will spiral and rapidly erode wealth.

Martin uses a technique he calls stress inoculation where, beginning with the premise that financial markets are unpredictable, he runs through scenarios to explore how a client might cope with a significant loss, say 50 per cent of their assets. “You’re exposing them to their worst-case nightmare scenarios,” he says. “People prone to depression and anxiety tend to only scan the environment for the threat and the negative. [Therapy] helps them also scan for the neutral, and scan for the upside of change.”

Wealthy clients can also struggle to talk about their financial anxieties with peers, because a less well-off relative might not be sympathetic if a person is experiencing depression because of a drop in resources from $15m to $10m.

People, consciously or subconsciously, place feelings about something from their past — a relationship with a parent or a trauma — on to money. In her financial practice, Barr uses an exercise in which a client brings a significant sum of cash — up to $1,000 — to their session in one and five dollar bills, denominations clients would have had more experience with as children. Some bring in coins. They then sit on the floor, and talk to the money.

Clients can be sceptical, but when they get into the exercise, what they say opens surprising doors. Money can be an idealised substitute for a parent, or a comfort from isolation.

In adults, this can develop into a preoccupation with accumulating wealth or an irrational fear of losing it. Someone who fights for more wealth may really be fighting for more of something else — like attention from a parent they felt they lacked. Barr notes these behaviours have knock-on effects beyond the individual, for their relationships, business and communities.

Financial therapists often work with couples. Couples who grew up with different levels of wealth may have different preconceptions. With inherited wealth, the inheritor might feel that in a crisis, the wealth is theirs to manage, rather than making decisions with their partner. As boomers age, therapists are noticing more inquiries linked to inheritance. Sometimes an unhealthy behaviour comes from an anxiety that comes with having great wealth. Some heirs come to therapy because they are rich, but feel an emptiness. “You can never underestimate the amount of shame that goes into having money,” says Wechter.

High earners that reach out to financial therapists are often spurred by crisis. “A diagnosis in a family, death of a parent, death of a child — those things that are existential, those can be wake-up calls,” says Farr.

Financial therapists say that their increasing popularity is due to a growing awareness within the industry that wealth management is about more than looking after a client’s money, but also their wellbeing, goals and ambitions. Wealth managers have to provide more in order to be competitive against low-cost, automated alternatives. “If you’re just risk-return, you’re competing against algorithms and you’re going to lose,” says Martin.

Farr says the work of financial therapists responding to the pandemic has only just begun, as people cope with the health crisis first, and then begin to address the financial impact. “In 2008, my phone was ringing right from the get-go,” he says. “Now, four months [into the crisis], my practice is starting to fill up.”