Get the newsletter now
Gibraltar tensions

UK in final Brexit talks with Spain over future of Gibraltar

Negotiations hampered by last-minute disagreements about taxes, cigarettes and the border

The UK is in the final days of its negotiations with Spain over the disputed territory of Gibraltar — an issue on which they need to reach a compromise for an overall Brexit deal to be concluded.

But the talks have been hampered by last-minute disagreements over tax evasion, cigarette smuggling and the border.

But people close to talks say that progress still needs to be made on several issues that go to the heart of the centuries-old dispute over the territory, which was ceded to Britain under the 1713 Treaty of Utrecht but which Spain claims as its own.

The outstanding disputes highlight how a widely publicised disagreement over Ireland — the biggest remaining obstacle to a Brexit deal — is just one of several land border problems that pose a risk to the wider negotiations.

These problems also involve Cyprus, which has borders between two UK military areas and the rest of the island. The rights of EU citizens living on the military bases are close to being agreed.

But the Gibraltar issue is much more troublesome, ahead of a crucial Brexit summit next week.

“My concern is that at the last minute there is going to be a flare-up in tensions over Gibraltar,” said Clare Moody, a British member of the European Parliament who represents the territory for the Labour party, adding that she was “particularly worried” about national politicians using the talks to start scoring political points. “We need to make sure there is a deal — and a good one.”

Spain has a veto over the provisions of any future EU-UK agreement that would apply to the disputed territory. Since Britain insists that Gibraltar must leave the bloc on the same terms as the UK, the use of such a veto could derail a broader Brexit deal.

Madrid has said that, while it will not use the talks to press its historic claim to sovereignty, it wants joint management of Gibraltar’s airport and greater co-operation on tax fraud and tobacco smuggling.

Josep Borrell, Spain’s foreign minister, said last month that he was “going to use the Brexit negotiation to obtain the most positive things possible for our people, for Spain and for the Spaniards who work in Gibraltar”. 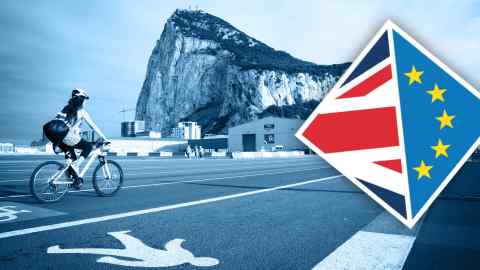 Spain, which wants deeper commitments from Gibraltar on combating tax evasion and harmonising tax policies, has long argued that the territory is a tax haven. The territory denies this. Madrid is also concerned that Gibraltar might loosen tax laws once it is outside the EU.

According to the people close to the talks, Spain is also looking for promises that Gibraltar will raise cigarette prices to help combat smuggling of the product, while the UK wants Madrid to agree that people will still be able to move in and out of the territory without much hindrance in coming years.

Thousands of people cross the border every day for work, but previous Spanish governments have on occasion closed the border to exert pressure on the territory.

Get alerts on Gibraltar tensions when a new story is published