Political unrest and trade tensions have battered the economy

Hong Kong’s private sector experienced its most severe downturn since the Sars epidemic in 2003 in November, according to a private survey, in the latest indication of the heavy toll that political unrest and trade tensions is taking on the territory.

The IHS Markit Hong Kong purchasing managers’ index fell to 38.5 from 39.3 in October in the worst deterioration since April 2003 — the height of the severe acute respiratory syndrome outbreak that killed nearly 300 people in the territory. A survey reading above 50 would indicate expansion, anything below that shows contraction.

IHS Markit also measures business activity, which it said had notched the steepest decline since the survey began.

Hong Kong’s economy has been battered by almost six months of increasingly violent anti-government protests, sparked by a now-shelved bill that would have allowed extradition to China. Tourism has slumped and shoppers have stayed at home to avoid street demonstrations. Data released on Monday showed the city’s retail sales fell 24 per cent year on year in October and the government predicted its first fiscal deficit for 15 years.

“The survey showed that the escalating political unrest saw business activity shrinking at the steepest rate since the survey started in July 1998,” said Bernard Aw, principal economist at IHS Markit, noting that Hong Kong had also suffered the sharpest drop in sales since the global financial crisis.

The violence escalated in November as police laid siege to two universities. Black-clad protesters holed up in Hong Kong Polytechnic University for almost a week, hurling Molotov cocktails at police who threatened to use lethal force to end the occupation. Demonstrators blocked many roads including access to a major tunnel connecting Hong Kong island to the Kowloon peninsula during the conflict.

Tens of thousands returned to the streets last weekend after a week of calm that followed the pro-democracy camp’s landslide victory in local elections that were widely viewed as a referendum on the protest movement. 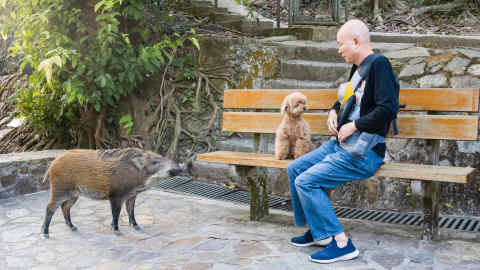 The survey found political unrest had disrupted businesses and that deliveries were “hampered by protest-related roadblocks”. Respondents also said demonstrations and trade tensions had hit demand.

Tommy Wu, senior economist at Oxford Economics, said the anti-government protests and external environment would continue to weigh on Hong Kong’s growth and forecast gross domestic product would fall by 1.4 per cent this year.

Mr Wu also said further weakness was likely in the labour market as some shops had already gone out of business while other employers have given workers unpaid leave or cut hours.

“But if the protests persist into next year then I would expect more retail outlets, restaurants, tourist-related sectors and marketing companies to go out of business, or seeing more retail and restaurant chains shutting down some of their locations,” he said.