Accept & continue
Manage cookies
How To Spend It Fashion

Why Moncler’s Maya jacket is the ultimate puff piece

Launched in 2009, endorsed by Drake and still a runaway bestseller, this is no ordinary puffa. We find out why

Sign up to myFT Daily Digest to be the first to know about Fashion news.

There it is. A sartorial icon on the tree-lined slopes of Chamonix. Hooded, quilted and glossy, sauntering down to the après bar, its felted logo peeking out from a pocket on the left arm. You can catch it again in New York, slung over a shoulder on Fifth Avenue. And again in Milan, mid-November, with a pair of Timberlands in tow.

Few jackets can traverse borders like the Moncler Maya. A staple of both sportswear and street style, the garment has become a symbol for the modern era of the house – one littered with celebrities, designer collaborations and extravagant presentations. “It’s the ultimate iconic winter jacket,” says fashion photographer Camilla Åkrans, who in 2015 was tasked with capturing the Maya for the house’s Art For Love exhibition, along with 31 other artists.

In truth, it’s an unlikely success story. How does a goose-down jacket that retails for £855 continue to sell out each year, and in markets without a snowflake in sight? As we know, fashion swings to curious extremes, and Moncler’s motion refuses to cease. Take the company’s decision to open a store in Dubai two years ago as an extraordinary, almost irrational example of demand.

Moncler has its roots in 1950s France, in the mountain village of Monestier-de‑Clermont, after which it is named. Founders René Ramillon and André Vincent had been making equipment for adventurers – capes, quilted sleeping bags and tents – before they turned their hands to fashion. The first jackets were only designed for keeping their factory workers warm, but they soon caught the eye of legendary mountaineer Lionel Terray, who thought they might suit the slopes. He was right. Two years later, in 1954, the jackets were chosen to equip the Italian expedition to K2, the world’s second highest peak after Mount Everest.

By the early 1980s, Moncler had started to infiltrate the metropolis. Its popularity stemmed from Milan, where the Paninaro phenomenon was taking hold. Frustrated with the city’s classical austerity, Milan’s youth revolted by donning ostentatious labels, dining in sandwich bars and fantasising about America. It was a movement spurred by “passion and love and sex and money”, as the Pet Shop Boys sang. Parisian designer Chantal Thomass was tasked with modernising the house’s classic down jacket, and the new styles that resulted became a prominent Paninaro motif.

Launched in 2009, the Maya follows this series of jackets – most notably a zip-up design from 1998 called the Bazille. “When I think about the Maya jacket, a lot of emotions come together all at once,” says Moncler CEO Remo Ruffini, who purchased the Moncler Group in 2003. “It speaks to me about Moncler’s history and continues to be a signature jacket – the one that most closely reflects the image and spirit of the brand.”

The most obvious nod to the Maya’s predecessors is its hood – a detachable, sleeping-bag-like shroud with an elasticated hem and a snap-stud chin guard. The logo-bearing pocket on its sleeve has also been lifted from the original Karakorum jacket, where it was initially positioned on the front. And like the Bazille, the Maya has a visible central zipper. But unlike most of the styles before it, the Maya has a slimmer silhouette, a conscious step away from the Michelin Man look that puffa jackets have become characterised by. This leaner fit is thanks to its boudin construction: horizontally stitched quilting that’s filled with a precise ratio per centimetre of goose down. The more boudin a garment has, the more a designer can work on its fit; the Maya has 5,5 boudin, whereas previous styles have usually been 4,5. 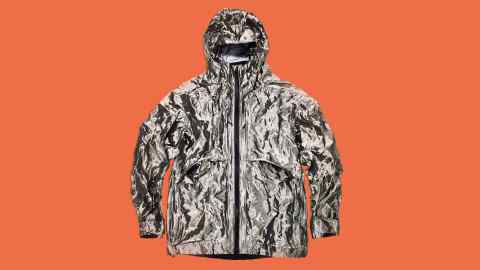 It’s this “charm and timeless allure”, says Ruffini, that upholds the Maya’s relevance in the modern world. Indeed, online platform Lyst ranked it first in its list of Hottest Men’s Products for the last quarter of 2019 – a year when Moncler exceeded €1.4bn in revenue, up 22 per cent from the previous year. (When Ruffini took over the brand in 2003, its total annual sales were approximately €60m.)

But the Maya really hit the big time in the summer of 2015 when Canadian rapper Drake released Hotline Bling – a slightly crass yet irrefutably catchy ode to an ex-girlfriend. When the video debuted in October, critics could talk about only one thing: the cherry-red Maya jacket the rapper wears throughout. Memes multiplied, sales doubled in one day and the jacket established itself as an internet sensation.

Moncler reissues the Maya in a new range of colours each year. Options for 2020 include navy, orange, military green and, of course, black – which is one of Mr Porter’s best-performing outerwear styles, says buying manager Daniel Todd. He highlights the jacket’s “high-shine finish” as a factor in its success. This waterproof gloss, or laqué, is made by a finishing process known as calendering, where the fabric is pressed between scalding-hot rollers. In the Maya’s case, this is done twice, helping the 40-denier nylon to repel both rain and snow while keeping lightweight.

Socialite, influencer and Moncler enthusiast Olivia Palermo is another advocate for the house’s distinctive jackets. While her “extensive” stockpile is better known for its more glitzy styles, it also stretches to a few early Mayas. “What I love most about Moncler is that they don’t sacrifice technical quality for design,” she says. “The creativity is there without losing their heritage as a ski-performance outfitter.”

But for all of its timelessness, a fundamental detail of the Maya is quickly falling out of fashion. Within the industry, it is commonplace for goose down, the soft layer of feathers closest to the birds’ skin, to be plucked from live animals – something that Moncler, quite rightly, has been forced to tackle head on. After Italian broadcaster Rai accused the house of sourcing unethical feathers in 2014, it compensated by introducing its Down Integrity System and Traceability Protocol a year later. Now Moncler has gone a step further by committing to recycle its down through a process that requires 70 per cent less water than traditional methods. It’s also forgoing single-use plastics. “We can, we must, always go beyond what we have already achieved if we are to make our future better,” said Ruffini at the time of announcement in October.

On closer inspection, the secret to the Maya’s success might not be so mysterious after all. In 2020, there isn’t much that something with the internet’s approval, an international passport and a nod to athleisure can’t do – at least when it comes to fashion. But in the cult of merry-go-round trends, where the demand for “what’s next” is constant, there’s an odd comfort to be gained from a jacket that takes its style cues from the past. All the better if it actually keeps you warm.