Fast Retailing: fit for the future

Tadashi Yanai is one of the few people close to SoftBank founder Masayoshi Son who will openly criticise his penchant for deals. As Son devotes more of his energy to the Saudi-backed $100bn Vision investment fund, the 70-year-old founder of Fast Retailing reminds his old friend to stay focused on his core business.

But while they often collide on risk-taking strategy, what two of Japan’s most driven chief executives share is their vision of a digital transformation that has upended the businesses they founded. This is also the area where Yanai turns to Son for his views on big data, robotics and artificial intelligence.

Established in 1963, Fast Retailing has boldly expanded to become the world’s third-largest casual clothing retailer, with annual global sales of $19bn. Among other brands, the group operates more than 2,000 Uniqlo stores in over 20 countries, and expects to expand into India and Italy later this year. Overtaking larger rivals Inditex-owned Zara and Sweden’s Hennes & Mauritz had long been Yanai’s goal, but with ecommerce on the rise, it is also the likes of Amazon that preoccupy him these days.

The key to survival in the digital era, Yanai says, is to have the ability to collect and analyse troves of customer data to create products consumers want. For that, Yanai turned to Google last year for machine-learning and image-recognition technologies to analyse product trends and predict consumer demand. “I want to make clothing the world’s cutting-edge business,” Yanai said at a Google Cloud Next event in Tokyo last September.

But churning out hit products is not enough in the era of ecommerce. Like Amazon, Fast Retailing needed to establish a seamless logistics and supply chain network that will allow its products to be delivered without delay to the “I-want-it-now” millennial generation.

If Google is Fast Retailing’s partner for AI, its ally in the overhaul of its supply chain is global logistics giant Daifuku, which helped transform Fast Retailing’s flagship warehouse in Tokyo into a 24-hour operation by replacing 90 per cent of its workers with robots.

The company plans to spend $900m to automate other warehouses worldwide within the next few years to address labour shortages, storage costs and lags in delivery. “No matter how good our products and stores may be, we need to have strong logistics to connect the two,” Yanai says.

At its distribution centre in Tokyo’s Ariake district, the only work done by humans is the process of collecting items and placing them in cardboard boxes to be shipped to customers — robotic arms are not yet proficient at picking up soft materials such as clothing. But all the picking of items off warehouse shelves is performed by robots. 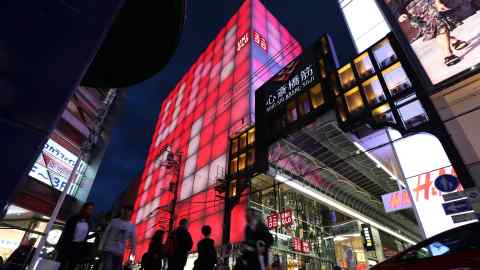 The robotics system carries out all other labour, such as inspections and sorting of goods by reading their electronic tags. The products are then wrapped in a cardboard box and whisked away on a conveyor belt. Such methods have cut the time between order and despatch to as little as 15 minutes, compared with the eight to 16 hours it took previously.

The overhaul of Fast Retailing’s logistics system did not come easily — nor with the speed that Yanai had originally envisioned.

Hard lessons were learnt when the company suffered a logistics meltdown in 2015, leading to severe supply problems with its best-selling products and the costly accumulation of unsold inventory in its warehouses. In those days, its Heattech thermal underwear was delivered to its warehouses in May, then stored for five months before going on sale in the autumn.

“We used to just leave everything to our warehouse operators and there was no consistency. As a result, cost management was lax and we fell into a situation where the costs just kept on rising,” says Takuya Jimbo, an executive in charge of the group’s supply chain reform.

Fast Retailing is not alone in trying to adapt to the accelerating shift towards internet shopping and competition from online entrants such as Amazon. H&M was one of the first fashion retailers into online selling, but in recent years it has focused on the rapid growth of physical stores.

As that strategy began to falter, the company tried to adjust that balance, investing in automated warehouses to achieve next-day delivery for 90 per cent of its European customers. But replacing its logistics systems has not been cheap, with rising costs depressing its earnings.

Inditex of Spain has 19 warehouses around the world dedicated to fulfilling online orders, which account for about 10 per cent of its annual sales. The company has invested in improving its “click and collect” services that allow consumers to pick up products ordered online at a nearby store.

For Fast Retailing, analysts say the challenge will be how it can strike a balance between online and physical store customer experience while maintaining margins in the face of pricing pressures. In addition to the risk of declining footfall in stores, finding a balanced logistics strategy for high street stores and ecommerce will not be simple.

Fast Retailing’s annual online sales are about 7 per cent in Japan, 20 per cent in the US and 15 per cent in China. Yanai says he wants to increase that ratio to 30 per cent globally over the next few years.

“The more you increase ecommerce, the faster you will close down physical stores. That has at least been the standard in Europe and the US, and Fast Retailing could go down the same path,” says Kensuke Kojima, a fashion business consultant in Tokyo.

Still, analysts say few in the retail industry have been as aggressive as Yanai in investing in new technologies and seeking out new partners to ensure its business model can survive the age of digital commerce.

“It’s not just about Yanai’s leadership,” says Dairo Murata, an analyst at JPMorgan Securities. “The company does everything from manufacturing to development of materials, factory management, logistics and distribution. That is why it can take risks, because it controls everything. That’s rare in the retail industry.”

When asked about the threat posed by Amazon and Zozotown, a Japanese online marketplace, Yanai points to Fast Retailing’s breadth of operations. “I firmly don’t believe Amazon and Zozo will dominate the entire apparel market. In fact, I think it is our strength that we do everything from planning and manufacturing to sales,” he says.

The company can take risks, because it controls everything. That’s rare in the retail industry

A big part of Fast Retailing’s success in launching hit products has been Yanai’s ability to pick the right partners. Long before Google and Daifuku, collaboration with carbon fibre maker Toray resulted in new materials, such as Heattech and Sarafine, which retain heat in cold weather or breathe in the sweltering summers, respectively.

Fast Retailing expects its list of technology partners to grow. “In the apparel industry, one company cannot dominate the world and it is necessary to grow together with partners,” Yanai said in late 2017.

“I don’t think there is any company other than Fast Retailing that can partner with the world’s top players, from Toray, Mitsubishi, Accenture, Disney, Apple, Google and Alibaba to Tencent.”