The Spring/Summer 2020 men’s season has shied away from full-throttle fashion — difficult, engaging, sometimes enraging, pushing forwards. Perhaps that’s because of Prada’s show shift to Shanghai, removing the main definitive season-defining anchor from the Italian collections; or maybe it’s because of the increased gravitas this season of the Florentine Pitti Immagine showcase, which is at its heart about selling clothes (literally: the heart is a trade fair with over 1,000 companies exhibiting wares, attracting some 18,500 buyers).

But Paris has begun with a strong selection of shows inspired by and inspiring fashion, shows that are proposing different ideas for men’s wardrobes, seeking to evolve ideas of how we dress our bodies. It’s exciting. It may also be slightly unwearable at the off, but it’s not always the point to be able to lift everything you see straight off a model’s body and onto your own.

Jonathan Anderson was pushing it this season. His JW Anderson show made a statement of sleeveless cuts backed with great flanges of fabric, like wings, exaggerating the width of his silhouettes and framing arms either encased in skinny rib knits or left bare. Other garments were dissected around the body, slashed to ribbons or scissored to components, like the lapels of an evening jacket resting over naked flesh. Anderson is also creative director of the Spanish luxury leather house Loewe; here, he toyed with a different display of skin.

The parallels between his role there and this own-label show were interesting; rather than eschewing all similarities and trying to differentiate the two brands, Anderson was embracing the similarities. He examined craft, which has become a key element of Loewe’s image (since 2017 the house has sponsored a prize awarding craft artisans), here in knitted tunics and patchworks with a distinct hand-made feel. Distinct is a good word for what Anderson does; it feels special, and individual. And it will be interesting to see if that bolder shoulder proposal sparks a wider shift in silhouette. Anderson was one of the first of a modern generation of designers to combine gender — he isn’t the source of the whole bender-blending shtick we see everywhere now, but can be recognised as one of the early fashion instigators of this incarnation. He’s influential.

So is Pierpaolo Piccioli of Valentino — in fact, he is one of the most influential figures operating in fashion right now. To begin, he has powered Valentino (owned by Mayhoola, the investment entity backed by Qatari royalty) to a turnover of €1.2bn — an exceptional figure considering that in 2013 it stood at €488m. His influence is most usually lauded when it comes to his womenswear collections, especially his haute couture, with his past few collections resurrecting the grand dimensions and luscious colour of mid-century haute couture. If you haven’t seen them, you’ve seen their repercussions. His menswear is, on a quieter level, equally astute — Valentino produces clothes that dress men across a span of, roughly, 18 to 80, managing to please almost all demographics.

This collection included brightly coloured, graphically patterned print shirts - “psychedelic journeys”, Piccioli called them, featuring unreal terrains and imaginary creatures — but also suiting. Although the suiting was mixed up, mismatched, generally given a sportswear feel. “Sportswear isn’t a trend, it’s a new approach to life,” Piccioli said. “And men will wear sneakers for a long time.” He was wearing a pair of Valentino trainers himself as he said that, of course.

There was also something a little fragile and vulnerable to Valentino’s men this time — trenchcoats and double-breasted coats sketched out in fluid silks rather than firm gabardines, coats softly rumpled. In a period when a power-suited, power-hungry man has become a figure of fear and loathing rather than aspiration, here tailoring was deflated, even humanised, blurring the lines between casual and sports. “I don’t like boundaries,” Piccioli said. He wasn’t talking politically. Or was he? Because you could argue that women’s liberation has liberated men too, over the past four decades, and these clothes are naturally a response to the gender politics of our era. As for the other politics? They’re unavoidable. As is the menace, now, of the image of a man in a suit.

There were no suits at Raf Simons. No ties. No boundaries. Not even the boundaries of Paris — Simons took us to a technical and science school in Noisy-le-Grand (French for “very far”), to the interior of a bunker-like tented building, with concrete silos up in back. Office chairs wrapped in black plastic formed the seating; the floor was a Venusian violet plain. Watched Chernobyl? It was very that. Chernobyl has been lauded for its power, its terror, the compulsion to continue watching the dystopia unfold. That sounds like a Raf Simons show — because Simons gets under the surface, under the skin — he played the soundtrack to the film of that name, as his models wandered out in clothes that seemed like ragged vestiges of garments rescued from some apocalypse or disaster. Weirdly, the orange landscapes on shirts at Valentino looked a little apocalyptic — but looking at those garments was like watching it take place at a distance, through a window. Simons immersed you in the experience. It felt visceral, vibrant, exciting. It felt real.

The clothes whizzed past in scrambles of text, imagery and shape. You scrambled, in turn, to write down some of the phrases: “15/16 How To Text Your Teen” read one snippet. “Stone(d) America” another. Badges and patches read “My Own Private Antwerp”, where began his career and where he is now based again after a period living and working in New York as chief creative officer of Calvin Klein. He parted ways with that brand last year, before his contract officially ended. The flagship store he had renovated is now closed, and his final collection is finishing its life on store rails.

Simons didn’t speak after this show — his exit from Calvin Klein was recent, and no doubt he isn’t able to for a multitude of reasons, not least legal ones. Yet this show spoke for him — not about Calvin Klein specifically, but more widely, about his experience with and views of big corporations as a whole. It doesn’t take a genius to intuit that, with models dressed in chopped-up nuclear clean-up gear, in hospital gowns and rubber boots and gauntlet-like gloves, Simons feels burned.

And doesn’t the world feel burned by lots of business right now? Isn’t there a sense that perhaps money is the root of all evil, especially when personal vested financial interests seem to be (or can be seen to be) influencing decisions that should be for the greater good? Who’s paying for profits? These all seem to be questions with increasing significance never mind the old ever-raging fashion-specific creativity versus commerce debate.

The lack of men in suits at Raf Simons was exactly the point — it indicated his creative freedom, which produced an energising, petrifying, polarising, terrifying and ultimately terrific fashion experience. Many models wandered out carrying clothes that bore a patch printed with a single word: “Support”. Simons has my support, for his courage and his creativity, for his modern clothes that reflect a modern world, with all its beauty and flaws. Fashion doesn’t get more full-throttle. 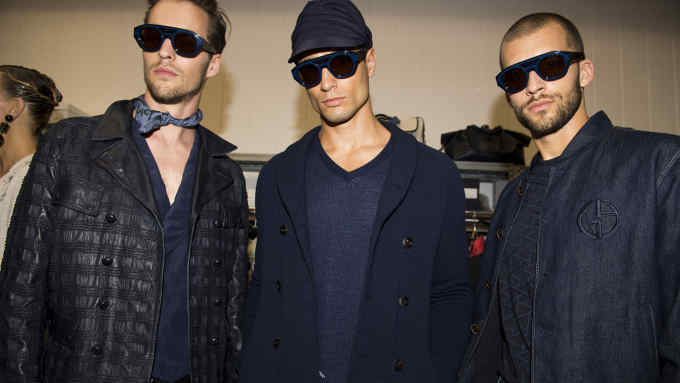