Lilium hopes to soar with launch of electric air taxis

It is 2025 and midtown Manhattan is snarled with traffic. But the 19km journey to JFK airport — normally about an hour by road — takes just five minutes in an electric flying taxi and costs roughly $50.

This is not from an episode of The Jetsons. It is the vision that Lilium, a Munich-based start-up, is working towards bringing to the public within six years. The company, founded in 2015 by four engineering students, is developing vertical take-off and landing (VTOL) jets for a fleet of flying taxis that will be as easy to book as an Uber car.

“We’re not intending to make it a luxury product that only the rich can afford. We want to make it a service that everyone can use,” says Remo Gerber, Lilium’s chief commercial officer. “It has to be affordable — it shouldn’t be just for the select few. We want it to be truly accessible.”

Daniel Wiegand, Lilium’s chief executive and a life-long aircraft enthusiast who began piloting gliders at 14, developed the idea while studying electrical engineering and flight propulsion at the Technical University of Munich. He wanted to apply VTOL technology used by military aircraft such as the V-22 Osprey to the civilian sector. This involved making the technology smaller, quieter and more eco-friendly by using electric engines.

Together with three friends — engineer Sebastian Born, aerodynamics specialist Patrick Nathen and Matthias Meiner, a mechatronics engineer — he founded Lilium. By 2017 they had developed an unmanned two-seater prototype, called the Eagle, whose maiden flight was broadcast on YouTube. The company, which employs 300 staff, is working on a larger five-seater version, which it plans to unveil later this year.

Gerber, who previously worked with ride-hailing app Gett and discount website Groupon, joined the team in 2017 to help turn an engineering project into a full-service company. Lilium plans not only to build the jets at a factory in Bavaria, but also to operate the air taxi booking service itself.

Lilium has raised about $100m in two funding rounds. Atomico, the venture capital firm founded by Niklas Zennstrom, was an early investor, putting in €10m in 2016. The company raised a further $90m in 2017 from a consortium led by Tencent, the Chinese internet company.

Investors are attracted by the idea that Lilium might represent a fundamental change in how we will travel in the future. “From underdeveloped regions with poor road infrastructure, to the developed world with traffic congestion and sprawl, new possibilities emerge when convenient daily flight becomes an option for all of us,” said David Wallerstein, Tencent’s chief exploration officer, when the company invested in Lilium in 2017.

We are a ‘deep tech’ solution with a true competitive stance

The air taxi market is expected to be worth $1.5tn a year by 2040, according to a report from Morgan Stanley, with passenger traffic comprising $851bn of that.

“It is still at a very early stage. The first things being talked about are servicing offshore oil rigs and delivering [donor] organs, trying these out in more controlled environments where there are fewer people around,” says Adam Jonas, a research analyst at Morgan Stanley. From there he expects air taxi services to move to areas such as parcel delivery and gradually into full passenger services.

“It is still at the proof-of-concept stage. In two or three years we will have a much better sense of what the market will look like,” he adds.

Lilium is not alone in developing urban air mobility vehicles. At least 19 other companies are developing propositions, including big aerospace manufacturers Airbus, Boeing and Bell (formerly known as Bell Helicopter). Lilium is also competing against some of the biggest names in tech: Uber has announced plans to launch its own flying taxi service by 2023, and Google co-founder Larry Page is an investor in Kitty Hawk, a start-up that is testing flying cars in New Zealand. Volocopter, another German company, is testing an aircraft in Singapore and has obtained investment from tech company Intel and carmaker Daimler.

But with roughly $100m in its coffers, according to business information provider Crunchbase, Gerber believes Lilium has the firepower to match its rivals. “We have been very successful in fundraising and we are comparable to US competitors,” he says. Only California-based Joby Aviation, which, according to Crunchbase figures, has raised a total of $131m from investors including Intel and Japanese carmaker Toyota, is better funded among the start-ups in this space.

Gerber says that Lilium, as an engineering company, is focused on more than boosting its spending power. “We are not building an ecommerce play where the only thing that counts is how quickly you build. This is not another food start-up. We are a ‘deep tech’ solution — that has given us a true competitive stance,” he says.

Lilium is hoping to differentiate itself from rivals with the efficiency of its electric jet. The egg-shaped aircraft’s 36 small turbofan engines angle downwards to lift it vertically off the ground, then swivel to a horizontal position so that it flies like a conventional aeroplane. This uses less power than many competitor models, which function more like hovercraft.

The design gives Lilium’s jet a longer range. It can fly for an hour on a single charge, covering about 300km, though at a maximum speed of 300kph, it is significantly slower than a commercial airliner. Powered by a battery pack similar to those used in electric cars, the jet is relatively quiet, generating about the same noise as a truck during take-off and landing. This would allow it to operate in cities where helicopters, for example, would be unsuitable.

Gerber says many cities are interested in the Lilium service as a way of solving an infrastructure problem. “We live in an urbanised world and it is only going to become more so,” he says. “One of the biggest problems governments have is moving people around. Building infrastructure like roads and rail is very expensive — here is an opportunity to do it a thousand times cheaper. We can connect places that would not be economically viable to connect with a bridge or railway.”

Some recent infrastructure projects with hefty pricetags underscore this point. A planned high-speed rail link between Singapore and Kuala Lumpur has been under discussion since the 1990s but has been repeatedly postponed because of high costs — most recently estimated at S$37bn ($27.3bn). In the UK, the cost of Crossrail, a rail link connecting east and west London, has crept up to more than £15bn.

“We are having conversations with a number of cities in Europe and Asia — a number of places are highly interested,” says Gerber, adding that Lilium is hoping to have the first “meaningful services” operating in several locations by 2025.

“By ‘meaningful service’ we mean more than just one aircraft that is booked a year in advance,” he says. Lilium is in talks, for example, with SBB, the Swiss national rail service, over a potential joint project.

Many hurdles remain, however, before Lilium can take off: regulation, for example. The first aircraft Lilium is creating will be flown by human pilots, although the long-term plan is to operate self-flying jets. The company is hoping the human-piloted jets can be classified as light aircraft, making obtaining permission to fly relatively straightforward.

Permission for unmanned flight is a different matter, and would require new regulation from bodies such as the US Federal Aviation Administration and the European Aviation Safety Agency. Discussions on how flying cars would share public airspace have yet to begin.

Obtaining planning permission to build landing pads in cities — and clearance to fly aircraft over densely populated urban areas — will be another hurdle. If Lilium and its competitors can convince authorities that urban aviation is a solution to congestion, they may find city planners sympathetic. 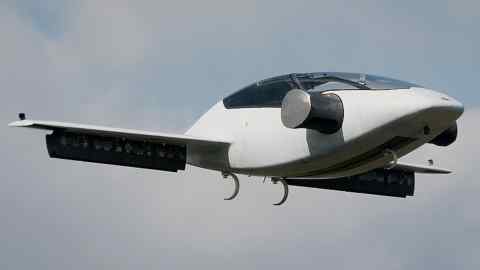 Whether flying taxis can operate in sufficient numbers — and with energy efficiency — to become a mass transport alternative to trains and highways, in unclear.

Jonas at Morgan Stanley believes, however, that regulation will be a tougher challenge than companies in the sector are willing to admit. “Regulation is the elephant in the room. The noise alone is a big issue. Yes, they are quieter than helicopters, but the noise of a drone overhead can still be irritating. Then there are the privacy issues and concerns about safety and cyber security — whether these will be hackable,” he says.

The final test will be whether the public will be willing to use an “Uber of the skies”. Lilium is endeavouring to make its service feel sleek and desirable: last year it hired Frank Stephenson, a car designer for companies such as Ferrari and McLaren, to give the flying taxis some design pizzazz.

A survey conducted in several US cities last year by Booz Allen Hamilton, the consultancy, found that most respondents were either positive or neutral about the prospect of travelling in an urban air mobility vehicle, with fewer than 10 per cent expressing concern. However, there was increased apprehension when it came to flights with no human pilot.

Gerber hopes that, in time, the experience will come to seem normal. “It is still a flight and some people will be nervous of that,” he says. “It will be a different form of flying, however. There is no aggressive take-off, and it is not noisy like a helicopter. People will just have to experience it.”