Evergrande: the bond and interest payment deadlines to watch

Evergrande faces rising repayment pressure on its dollar-denominated bonds in the coming months, despite making several last-minute transfers in October that allowed the heavily indebted Chinese property company to narrowly avoid a default.

Investors and global markets will be watching for clues as to the eventual fate of the world’s most indebted property developer, which faces $8.1bn in interest and principal payments on its offshore bonds before the end of 2022 and has hundreds of projects across China.

Evergrande has not provided an official statement on its missed bond interest payments, several of which triggered 30-day grace periods for payment in September. Two of the payments were then made before the grace periods expired, including one late last week, according to people familiar with the matter.

Evergrande does not have any offshore bonds maturing this year but the company faces large principal repayments in March and April, both of which present a much greater challenge than the interest payments it has grappled with in recent weeks.

The repayment demands compare to cash and cash equivalents of $13.6bn at the company at the end of June, according to the latest available data. But the company was subsequently engulfed by a liquidity crisis that put pressure on its vast obligations within mainland China, ranging from wealth management products to money it owes to contractors, and cast uncertainty over its financial position.

Work on some of its projects was suspended over payment delays but has recently restarted at several locations in China.

The Chinese government has also played down the severity of the situation, without indicating the role it is playing in its resolution.

The Evergrande crisis, which could result in one of China’s biggest ever restructuring processes, has spread to more of the country’s property developers over the past two months. The sector accounts for a large portion of debt on the Asian high-yield bond market, where borrowing costs have soared. Yields on an ICE index that tracks riskier Chinese borrowers were at 23.5 per cent on Monday. 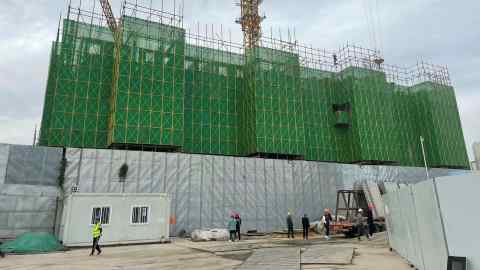 Developers including Sinic, Fantasia and China Modern Land all defaulted in October. On Monday, Yango, another property company, proposed a debt swap with investors that would delay its repayment of several bonds. It said in an exchange filing that the offers were intended to improve liquidity and “avoid payment default”.

In the absence of a clear explanation from the company, observers and market participants have had to speculate as to why it made last-minute transfers after missing interest payments in September. Some have suggested that Evergrande is seeking to buy time to sell assets offshore, while others say the government is involved behind the scenes.

Beijing is likely to be concerned about the completion of Evergrande’s Chinese developments, where many customers have bought houses before they have been built. At one site on the edge of Beijing, contractors said they stopped working in July but returned last month and had been told the government had taken over the project.