Fear of UK slowdown as sentiment dips across economy

Britain experienced a deterioration in sentiment in June across a range of sectors including consumer, retail and construction, renewing concerns over the state of the economy and reversing some signs of improvement in May.

The GfK consumer index, released on Friday, dropped to -13 in June, down from -10 in May and below market expectations. Worries of downbeat consumer spending were supported by poor reading from a European Commission survey released on Thursday.

The sentiment indicators confirm fears of a sharp slowdown in Britain’s economic growth in the second quarter amid uncertainty over Brexit. Bloomberg’s June forecasts for the second quarter of 2019 predict no growth, down from a 0.5 per cent economic expansion registered at the start of the year.

The GfK index for big purchases, part of the wider consumer index, also deteriorated and together with a worsening in the perception of personal finances “could point to a turbulent time for the economy over the summer months”, said Joe Staton, client strategy director at GfK, a research firm.

Howard Archer, chief economic adviser at EY Item Club, a consultancy, warned that a simultaneous weakening in the personal finances index could signal a “levelling off” in employment and earnings growth in the second quarter. 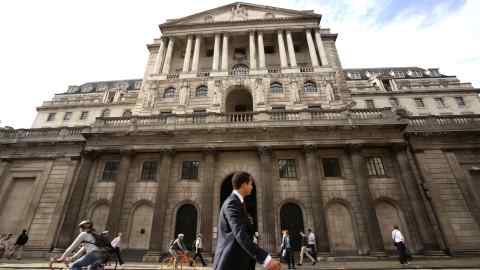 According to the commission data, sentiment in the retail sector dropped to to -7.5 in June, down from +3 in May and to its lowest level in six years. The survey’s findings suggest a poor shopping season in the second quarter after two consecutive month-on-month contractions in April and May, reported last week by the ONS.

While the services sector improved in June the industrial sector deteriorated marginally to -10.8, the lowest since 2013 and the worst reading in the EU.

“The manufacturing sector has clearly suffered appreciable payback in the second quarter from the boost to output that had come in the first quarter from stockpiling of finished products,” said Mr Archer.

The poor industrial sentiment was broad-based across sectors with net figures between -20 and -30 for the automotive industry, the chemical, textile and apparel sectors.

“With the [commission] industrial balance well below its long-run average and the global manufacturing sector continuing to deteriorate, we suspect the manufacturing sector will remain a drag on GDP for some time yet,” said Gabriella Dickens, economist at Capital Economics.

Builders’ sentiment tracked by the commission survey also dropped to its lowest level since August 2017, with more than one in three businesses reporting lack of demand as a reason for limiting activity