Leo Lewis and Kana Inagaki in Tokyo, and Chloe Cornish in Beirut

Carlos Ghosn has fled what he called “injustice and political persecution” in Japan and made it to his home country of Lebanon in an unprecedented breach of both strict bail conditions and the close surveillance of police, prosecutors and private detectives.

In a short written statement, the former Nissan-Renault boss confirmed on Tuesday that he was in Lebanon, which does not have an extradition treaty with Japan. He declared that “he will no longer be held hostage by a rigged Japanese justice system where guilt is presumed, discrimination is rampant, and basic human rights are denied”.

“I have not fled justice,” Mr Ghosn said. He added that he could “now finally communicate freely with the media, and look[s] forward to starting next week”.

People close to Mr Ghosn said that he landed at Beirut’s Rafic Hariri international airport late on Sunday. Local media in Lebanon reported that he arrived in a private jet.

Amid speculation that Mr Ghosn may have used a false passport, the mystery of how he fled deepened on Tuesday morning when Japanese state broadcaster NHK reported that a source at Japan’s immigration office said authorities had no record of Mr Ghosn leaving the country.

Prosecutors had earlier told Japanese media they were not aware of any change to his bail conditions — a set of strict controls that included the door to his apartment being under 24-hour camera surveillance and his not being able to see his Lebanese wife without special permission. Mr Ghosn paid a total of ¥1.5bn ($13.8m) in bail, which he now risks forfeiting.

Junichiro Hironaka, who heads Mr Ghosn’s legal team in Japan, told reporters that he was “surprised and baffled” by news of his flight to Lebanon and said he had been unable to reach his client. He said his team still held all of Mr Ghosn’s passports, and last saw the former chairman on Christmas Day. They had agreed to meet again on January 7 to discuss trial strategy.

“If this is true, we have to assume that this is a breach of bail conditions,” Mr Hironaka said. “His act is unforgivable and a betrayal of Japan’s justice system.”

Mr Ghosn, who was arrested in November 2018, spent more than 100 days in Japanese custody and has been in Tokyo ever since, awaiting a trial on charges of financial misconduct that had been expected to begin next year.

Mr Ghosn faces four charges that he falsified financial statements by understating his pay by more than $80m and misused company assets for his own gains.

He has denied all charges against him and accused senior Nissan executives, prosecutors and government officials of “plotting” his downfall over fears that he would force the Japanese carmaker into a full merger with Renault.

The 13 months since Mr Ghosn’s arrest have caused ructions within Nissan and shone an unflattering light on Japan’s justice system. Its extremely high conviction rate depends heavily on confessions by suspects during long periods in police custody.

The Tokyo District Public Prosecutors Office and Japan’s Immigration Services Agency, which are closed ahead of the New Year holiday, could not be reached for comment on Tuesday.

If the former chairman does not return to Japan, it would throw the judicial process into disarray, leaving only Nissan and Greg Kelly, Mr Ghosn’s former aide who was arrested for financial misconduct charges, to face trial.

Nissan, which has also been accused of falsifying Mr Ghosn’s pay in financial statements, said it was still confirming media reports of his flight to Lebanon.

Mr Kelly, who denies he conspired with Mr Ghosn to falsify the former chairman’s pay, is complying with bail conditions and remains in Tokyo awaiting trial, according to his lawyer.

Mr Ghosn holds Lebanese, French and Brazilian citizenship and was long considered one of Lebanon’s most successful expatriate businesspeople. He is a partner in several Lebanese businesses, including a winery, and the Lebanese government advocated on his behalf after his arrest last year. 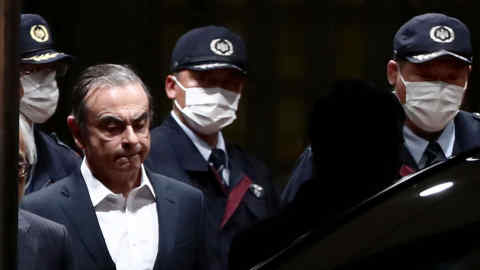 Japanese prosecutors built part of their case using evidence from a laptop obtained in Lebanon from one of Mr Ghosn’s aides, the Financial Times reported in May.

Lebanon’s General Security Directorate said Mr Ghosn entered the country legally and that there was no reason to take legal proceedings against him, state news agency NNA reported. The country’s foreign ministry said it had handed a “complete file” on Mr Ghosn to their Japanese counterparts earlier this month, without providing details on what was in the dossier.

In a statement on Tuesday afternoon, the French foreign ministry said it was “not informed of his departure from Japan and have had no knowledge of the circumstances of this departure”.

French junior economy minister Agnès Pannier-Runacher told France Inter radio that no one was above the law, but Mr Ghosn would be able to get French consular support as a French citizen.