Get the newsletter now
At Home with the FT House & Home

Tadao Ando: inside the ‘home’ of Japan’s most fabled architect

Through a slit in the façade you enter a private world, one of soft wood and cast concrete, where the confounding angles of the stairwell lead to rooms of pure symmetry, filled with natural light and the gentle swaying of a camphor tree.

Tadao Ando’s house could not be more Tadao Ando. It is quite a relief. Japan’s most fabled architect, a designer of stark and spiritual buildings, would appear to live his work, the man and his creations one and the same.

Yet a ticklish question does arise. This should be Ando’s residence. But there is no bedroom. Or food in the kitchen. And a couple of years ago he told Japanese TV that he lives in a normal apartment. This is Tadao Ando’s house, but is it his home?

When the man himself bustles in, affable, intense, sharp-boned and sunken-eyed, yet only half grey at the age of 75, he is having none of it. “This is my house,” he says with the certainty of a man about to sell his next-door neighbour’s Ferrari. A Pritzker Prize winner, yes, but Tadao Ando is a regular Osaka geezer.

Never formally trained as an architect, he learnt carpentry, fought six fights as a pro boxer (ring name “The Great Ando”), wandered the globe, and then came back to Osaka in 1969, got licensed, founded his own architectural office and started designing houses.

After a fashion, this building in downtown Osaka is indeed his house, even if it is not where he keeps his toothbrush. Ando built it to be his home in 1995 but never moved in. You can find it listed in architecture books as the “Atelier” or “Studio Annexe”. “I wanted a fun place to live, a place where every day is thrilling, a quiet place to think,” he says.

Built on a small 150 sq metre plot of land, the house has a basement and three upper storeys. “The basement, the first-floor living room, the second-floor study — they are all different. I wanted to make a place that changes from morning, to midday and evening. If you want to read a book in the day, you go to the second floor; if you want to relax and drink coffee, you go to the first.”

A few years ago he added an extension, turning the top floor into a meeting room by annexing the balcony and hanging a box off the side of the house, something he never planned for in 1995. “A building has to grow with you. Look at that tree outside. It used to be below the eaves,” he says. “Like your life, things are changed now from 10 years ago, and a house should change as well.”

An elevated railway line clatters noisily behind the plot. Across his extension Ando has built a thin window, and when seated in his Dream Chair, the trains race through it at eye level, seeming to come from and disappear into nowhere, like a magical model railway. The scenery may be modern; the borrowing of it is Japanese tradition.

These days many Ando buildings are grand (“There are lots of art galleries,” he says, in the tones of a solicitor who has done one too many divorces), but his career began with homes, often tiny but much loved by their owners, which sit like unexpected gifts in modest Japanese neighbourhoods. His philosophy of houses is minimalist but full of warmth. 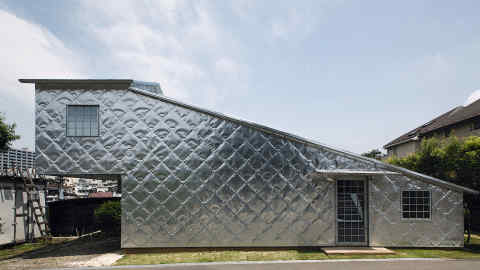 Ando is probably most renowned for his religious architecture, such as the iconic Church of the Light in Osaka, where a cruciform cuts through the concrete wall behind the altar. At one recent project on the island of Hokkaido, the client had built a giant Buddha, which drew few visitors. Ando’s answer was to bury it in a mound of earth, so only the top of the statue’s head is visible, making it look mysterious — almost comical. The visitor approaches through a tunnel until they arrive at the Buddha’s feet, and suddenly it rears above them in its majesty and mystery.

The architect makes little distinction between the sacred and the domestic. “Please write this,” he says. “A church is a home town for the spirit, a place where the spirit lives. Big or small. It’s the home of the spirit so when you go there you feel relief. You feel the spirit’s richness. I have to think whether I have made a home for the spirit or not. A house is the same. It must be a home for that person’s spirit.

“I built my first house 45 years ago. In Kobe. A child who was born there, when she turned 30 she asked me to make a house just like the one where she grew up in Tokyo. It was the house where her mother and father raised her so she wanted the same house in Tokyo. That showed me anew just how important is a home.”

The atelier is filled with fragments of Ando’s kokoro. There are charms in the tree; Le Corbusier models made by students and one by Renzo Piano; a note from Bono on the wall; many artworks. A picture by Ellsworth Kelly is a geometric figure like an orange ice-cream cone. One day, Ando decided its square frame looked wrong, and had two corners cut off to follow the shape.

Despite his age, Ando burns with vigour. His staff wear slippers. Ando has raced up to the third floor with his white sneakers on. He thrusts a piece of paper across the table. It is a sheet of traditional washi paper, fed through a printer to run off a low-resolution diagram of the human body. The gallbladder, the spleen, the bile duct, the duodenum and the pancreas are all neatly circled in blue ink. Ando, it turns out, has lost all of them to cancer.

“Everyone says you’re really lively for someone who’s had so many organs taken out,” he says. “Why am I so healthy? Because I still have things to do. I spend a third of my time volunteering, a third on my own work and a third on students.” He wants to teach the importance of architecture. “The most important thing is to have a vision of what you want to do. Because I have that vision and I’m working towards it, there’ll be a stimulus and I’ll get a burst of energy.”

Ando is still building all around the world — apartments in New York, houses in Sri Lanka, galleries in China — but not enough in Osaka, the earthy mercantile centre of historic Japan, which has gone through two decades of economic struggle as famous corporations such as Sharp and Sanyo succumb.

“At the moment it’s Italy, Switzerland, France, Germany, America, Korea, China and Taiwan. There’s not much in Osaka. But I love it because it’s my home town. I was born and raised in Osaka. I may not have work in Osaka but Osaka is important.”

Dark is falling and Ando is impatient. He has been trying to leave, in fact, since his initial description of the house. He signs a book and thrusts it across the table. Then he takes out a business card, doodles a little sketch of the Church of the Light and passes that over too. The sublime is serious, but the serious is not sublime. And with that, Tadao Ando is gone.

Ando’s most prized objects are works of modern art, many by life-long friends such as Takesada Matsutani and Shuji Mukai, who were members of the radical Gutai group in Osaka in the 1950s. “Gutai” translates as “concreteness”. The group’s artists were dedicated both to freedom of expression and to highlighting the method of creation. Matsutani’s most famous work uses nothing but graphite pencil; Mukai’s is filled with intricately layered symbols.

“This picture by Mukai-san of the Gutai group is important to me. Why? Because he’s been my friend for more than 50 years,” says Ando. “A person’s friends are the most important thing.”