Riding the Dolomites with mechanic, support car and soigneur in tow

The warning came as I swung a leg over an £8,000 bike as if I belonged on it. The Pinarello Dogma F8, Chris Froome’s favoured machine, glistened in the morning light, its chain cleaned to surgical standards. As the golden flanks of Mount Sassongher shed their shadows above Corvara, Eros Poli, the Italian former professional cyclist and my guide, told me to save a little energy for the biggest climb of the day. But I had been feeling strong and, with only the vaguest idea of what the Passo Fedaia would demand, I shot up the first ascent out of town like a doped goat.

I still felt good as we rolled into Caprile a couple of hours later. The village marks the start of the 14km Fedaia climb. It rises more than 1,000 metres to a lake below the summit of the Marmolada, the highest peak in the Dolomites in north-eastern Italy. Numbers like those suggest a demanding but doable ascent. But, I now know, the Fedaia Pass (2,057m) seduces cyclists with its picturesque lower slopes before spitting them out on the steep drag to the lake.

In 1987, when the Irish cyclist Stephen Roche mercilessly crushed his Italian teammate here to win the 70th Giro d’Italia, they called it the “Marmolada massacre”. It is the kind of climb that makes legends, in a race that has overflowed with them since the first Giro in 1909. Because of gaps during the world wars, this year’s race, which began in Sardinia last Friday, is the 100th edition and comes with added celebrations all along the 3,615km-long route.

It was created by La Gazzetta dello Sport, inspired by the success of the Tour de France, which had been established six years earlier as a promotional stunt by French newspaper L’Auto. (The leaders of both races wear jerseys the colour of the newspapers’ pages — yellow for the now defunct L’Auto, pink for La Gazzetta dello Sport). Eager to steal a march on the more established race, the Giro’s organisers decided it would be staged two months earlier, despite the fact that when the riders hit the Italian mountains, snow frequently still cloaks the highest passes.

In 1965, a five-metre wall of snow collapsed on to the climb to the Stelvio Pass, perhaps the most feared ascent on the Giro map. Racers traipsed through the debris on foot to resume riding in sub-zero temperatures. When I climbed the Stelvio in May 2013, three pairs of gloves could not keep my hands from going dangerously numb on the descent, via its 35 hairpin bends. It felt like riding in a wind tunnel in a walk-in freezer.

Three years later, on my ascent of the Fedaia last September, heat was one of my many enemies. After cycling in awe through the Serrai di Sottoguda, a deep limestone gorge closed to cars, the road reared up for three agonising kilometres. Without the psychological shelter of hairpins to break the road, there was nothing to do but grind up gradients of up to 18 per cent.

I was drooling over my bike — literally this time — when, out of nowhere, a man of a certain age and shape overtook me at impossible speed. Left hand clutching the roof rack of our support van, he showed considerable bike-handling skills while taking the illegal lift. “Grinta! Grinta!” He shouted the Italian encouragement, which means “grit”. “I say to you it’s hard, eh?!” I could only smile while willing the lake to appear.

The man was Poli, an ebullient cyclist who has nothing to prove as a climber. In 1994, a good bit lighter than today (what’s the Italian for bon vivant?) but all of his six feet and five inches, the veteran domestique, or support cyclist, for sprint legend Mario Cipollini became an unlikely hero of the Tour de France with a solo victory for the ages over Mont Ventoux. Now 53 and living nearby in Verona, Poli takes easier routes up hills alongside wannabes as a guide for InGamba, an American company shifting the “ride with a pro” cycling experience into an indulgent higher gear.

InGamba is the baby of another former pro. Joao Correia, Portuguese-born but mostly raised in New York, bookended a career as a Manhattan publishing executive with stints as a cyclist. The latter came in his mid-thirties when he rode for a year with the Cervélo TestTeam, then based in Tuscany. After retiring in 2010, he became an agent to dozens of riders while also seizing the emerging market for guided, fully-supported cycling trips for amateur enthusiasts. But InGamba trips (“gamba” means leg, while someone who is “in gamba” is smart) would go several extra miles, adding to the bikes, mechanics and soigneurs who joined our daily caravan the sorts of food, drink and comfort that even pros must retire to enjoy — if they’re lucky.

Tuscany was the obvious place to start and, later, searching for a second location, InGamba found La Perla, one of the smarter hotels in Corvara, a village in the Dolomites best known as a ski resort. Fausto Pinarello, who already supplied his bikes to InGamba, introduced Correia to the hotel’s eccentric owner, Michil Costa. Costa is a cycling fan himself, although he prefers to tour by penny-farthing these days. He is also president of the Maratona dles Dolomites, the annual gran fondo (an organised mass-participation ride) established 30 years ago to exploit some of the greatest climbs of the Giro.

At the back of La Perla, behind its Michelin-starred restaurant, Costa has built a tastefully branded Pinarello lounge-cum-cycling museum. Each morning, guests gather in freshly laundered branded Lycra to collect shoes and helmets from named cubby-holes. On the cobbles outside, mechanics and soigneurs lined up my bike. Drinks bottles had colour-coded nozzles — red for energy; white for water — and each rider received a personalised Scicon race bag. At rest stops, mechanic Francisco “Chico” Carvalho opened an adapted tool chest to reveal a smorgasbord of energy bars and gels.

I have done a few comparable trips, riding with David Millar in Majorca and Stephen Roche in the French Alps, but I have never seen such service or attention to detail. The bike alone was worth the journey, and I could see why InGamba has no problem selling its entire fleet to smitten guests at the end of each season (alas I could not justify the second-hand price of, er, £6,000). So while the climb up Fedaia was tough, I did it encumbered only by the phone in my pocket and my bad pacing. At the top, when it finally appeared, I joined my fellow wrecks — a dozen of us in all — to eat cheese toasties and sip espresso at the rifugio. Benji Carvalho, the soigneur, had lined up our bags on a low wall and, following the advice of Nate Ripperton, InGamba’s American man in the field, I swapped my sodden jersey for a fresh one before the thrilling descent to Canazei and another climb — this time to more than 2,200m — up the Passo Sella.

More than four in five of InGamba’s guests fly in from the US, but the company is keen to broaden its clientele. I joined a group of charming American 50-somethings. They included physicians, financiers and a retired attorney. We regrouped regularly and while Garmin bike computers were supplied, too (you really need only travel with your shoes, helmet and a rain cape), there is no formal timing. Coffee stops were frequent; unspoken competition on the climbs optional. I asked Ripperton, who lives in San Francisco, if it was almost indecent to offer wealthy amateurs a cycling experience as plush as this? “Ten years ago I would have said yes, you have to earn the stripes, but I think it’s great to be able to offer this level of access,” he said. “You don’t get to play baseball on Wrigley Field but you can come and ride a race bike on a course at the top level of this sport.”

Moreover, by equalising everything else, I suggested — the gear, the massages by Benji — the trip also highlighted, rather than closed, the gap between mortals and pros. On Marmolada, I had no excuses. “That’s always a sad thing, isn’t it?” Ripperton said. “Did you compare your time to the guys on the Giro? Were you even half as fast?” I did, and I was not.

In a couple of weeks, I can make more depressing comparisons; stage 18 of the Giro will take in the Pordoi and Gardena passes, which I climbed the day before the Fedaia on the classic Sella Ronda circuit, a ride around a vast massif which I had only navigated before on skis. These climbs, too, showcase the majesty of the Dolomites, which punch through green meadows in great carbonate fists. It is a demanding place to ride, but InGamba doesn’t take the “glory through suffering” road cycling fetish too far. I rode a modest if mountainous 150km over two days, returning to La Perla in time for a late buffet lunch laid on for the group.

Corvara is quiet in summer but the hotel offered sufficient diversions thereafter. Try, if you can, to take a tour of the labyrinthine wine cellar, where Michil Costa’s full eccentricity reveals itself. More than 27,000 bottles are presented in bizarre, themed chambers. In one, an old television plays Frank Zappa on a loop to the pinot noirs “because they like it”. In another, an elaborate temple to Sassicaia wines includes a seal, a sword and an altar. If Willy Wonka had been a wine-loving scientologist, this would have been his cellar.

At the end of the Fedaia ride, Poli slipped into his pool sliders en route to the spa and solved the mystery of the strange shape I had noticed in his jersey pocket; a bright yellow hip flask in the form of a banana, a gift from an old client. He handed me the last drop of the fiery Capovilla grappa that had sustained him. In his racing days, Poli remembers cycling with “la bomba”, a plastic flask with a cork attached by string containing egg yolk, sugar, mocha and cognac. “When you have 40km for the end of the race in a rainy day, you need la bomba,” he told me, his face lighting up with the memory of a different era. “Maybe next time you ride the Fedaia, you need one, too.” I nodded, laughed, and made the even slower climb up the stairs to my room.

Simon Usborne won ‘Travel Writer of the Year’ at the most recent British Press Awards. Click here for more of his work

The Giro d’Italia runs until May 28 (giroditalia.it). A new event on June 18, the Dolomites Bike Day, will see three of the region’s most famous passes closed to cars. The Maratona dles Dolomites (maratona.it) takes place on July 2.

Simon Usborne was a guest of the Alta Badia tourist board (altabadia.org) and the hotel La Perla (hotel-laperla.it). The hotel’s Leading Bike package, run with InGamba, costs from €433 per person per night, including cycling kit and use of a Pinarello Dogma F8, guides, team car, mechanic and soigneur. The tourist board website also lists other “bike friendly” hotels in the Alta Badia area. 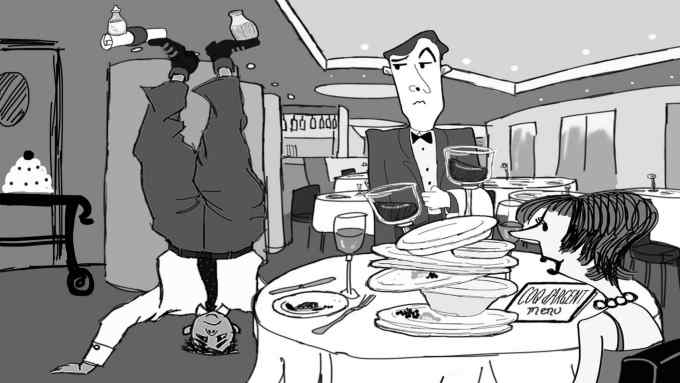 Cycling’s biggest competition races around France until July 23. For those inspired to follow in the tyre-tracks of the pros, here are six great rides, from the cobbles of Flanders to the Argentine altiplanoDonate