The collapse of Thomas Cook was the latest fuel to be added to the fierce debate about whether audit quality and independence are threatened by audit firms’ consultancy work for large listed companies.

The dispute has raged since the demise of Arthur Andersen, once a “big five” audit firm, after the 2001 Enron scandal. It could reach a climax this year if the UK government moves ahead with proposals to force such firms to create an “operational split” separating audit from consulting.

Like BHS, Carillion and Patisserie Valerie before it, the failure of Thomas Cook in September raised questions about whether auditors were too close to the client to spot red flags.

PwC, which signed off Thomas Cook’s accounts for a decade to 2016, gave remuneration advice to its board in the first four years of the audit contract. Such advice was restricted by the audit watchdog in 2016, and banned last year. EY, which took over as auditor in 2017, earned millions providing permissible non-audit services to Thomas Cook until it went bust, and carried out advisory projects for its board in the preceding decade.

The string of corporate collapses and accounting scandals created fears that rather than challenging them, accounting firms prefer to kowtow to audit clients, who have been or may be a source of consulting income.

The UK competition regulator said in a 2019 sector review: “The concern was that auditors may be reluctant to act objectively and robustly in their audit work for fear that this could be damaging to their relationship with the company management resulting in the loss of non-audit work.”

The “big four” auditors — Deloitte, PwC, KPMG and EY — dispute this. They cite a ramping up of regulations protecting auditor independence that restrict consulting work, and a misunderstanding of how they operate. “There’s a lot of people that don’t understand the nature of the work that is done by auditors,” says Hemione Hudson, PwC’s head of audit. “There are clear rules about what we can and cannot do for audit clients.”

Stephen Griggs, Deloitte’s head of audit, says: “There has long been an impression that auditors are influenced by opportunities to cross-sell unrelated advisory work. In practice . . . auditors already adhere to strict rules around the services they are allowed to provide.”

Providing consulting advice to a listed business one year leading up to and during the term of an audit contract has been restricted by a number of UK and EU regulations. Under rules set by UK regulator the Financial Reporting Council, auditors may provide only some “essential” advisory services, such as checking interim results and memos to shareholders. 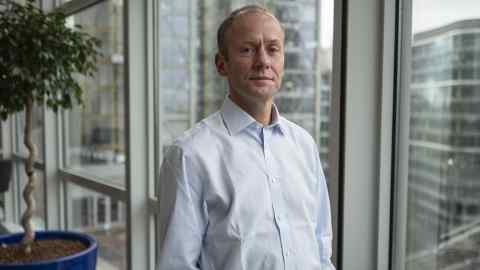 FTSE 350 companies must also rotate auditors at least every 20 years and put their audit out to tender every 10 years. However, when a company switches auditor, the outgoing one is freed up to take on non-audit work immediately. This cycle could potentially weaken the incentives of the existing auditor to challenge a company if it knows it will be in a position to sell consulting work in the future.

Ms Hudson rejects this. “The consulting unit has their clients and we have ours, that’s very much the view at PwC,” she says.

However, the head of audit at one large UK accounting firm, who wished to remain anonymous, disagrees: “Mandatory audit firm rotation has meant that in the last three years of an audit mandate you start to think how to translate the audit relationship into a consulting one.” He adds: “You start introducing people and you make sure you don’t piss off the client.”

Scott Knight, head of audit at mid-tier BDO, says: “The auditors work for the shareholders and not the management. [Consulting] services are procured by management so it really isn’t difficult to see how conflicts arise. The FRC has told the audit firms . . . that they are falling short in terms of challenging management. Clearly robust challenge is often inconsistent with a procurement relationship.”

BDO is looking at plans to separate its audit and consulting business. 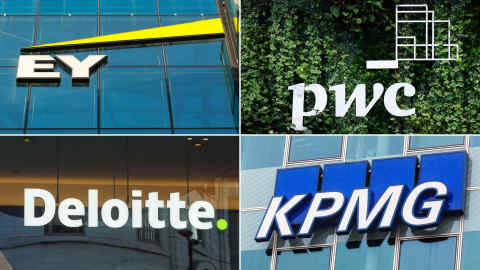 It has further been claimed that lucrative consulting fees pose a threat to audit independence. In 2019, 81 per cent of Deloitte’s revenue was derived from work other than audit; 78 per cent of PwC’s revenue was from such advisory work; 77 per cent of EY’s revenue; and 66 per cent at KPMG.

Research by the Competition and Markets Authority found that in all sectors, advisory fees earned by the big four were much larger than audit fees. In banking, audit fees were typically just 13 per cent of advisory fees.

According to disclosures to the CMA, when HSBC ended its audit relationship with KPMG, RBS switched from Deloitte to EY, Shell went from PwC to EY and Aviva ditched EY for PwC, the departing audit firms earned “substantial” consulting fees from their old clients. In some cases, advisory work brought in more than double what the audit firm earned in the last year of the contract.

Clearly robust challenge is often inconsistent with a procurement relationship

In another illustration, the FRC said that three of 11 audit misconduct cases it investigated in the past four years showed a “loss of independence” by an audit partner. The watchdog’s 2018 Development in Audit report identified “exercising appropriate scepticism” and “challenging company assumptions” as areas where improvement was needed.

“Perception is critical, and all audit firms acknowledge that the sector . . . needs to rebuild trust,” says David Herbinet, global head of audit at Mazars. “That is an important factor in scrutinising the structure of large auditors, but at the same time it could be argued that current rules do not fully address conflict risks.”

As the debate rages on and government ministers continue to explore remedies to improve trust in audit, splitting the big four firms looks likely to be one way to reduce financial incentives to accept situations of conflicts that are difficult to manage.

The consultants are on board. Michael Garstka, managing partner of Bain in the UK until February, says: “Audit serves a crucial purpose of assurance in public markets and as a check and balance on executive teams. Directors have the ultimate responsibility to report accurate accounts. An independent auditor would provide them increased confidence of objectivity and remove the potential for conflict.”