As Britain and the EU begin to negotiate the terms of Brexit, Polish fintech start-ups are among the businesses most anxious about the detail of the deal. The UK has been a second home to many of Poland’s fintech companies, the first stop on their foreign expansion plans. Many of them have located their headquarters in London, taking advantage of the UK’s fintech-friendly regulatory regime. As Brexit approaches, many of these businesses are having to decide if they will leave or stay in the UK, and if they do stay, how they will need to adapt.

Billon, a distributed ledger instant payment system, was one of three companies that represented Poland at Hanover Fair, a tech exhibition, this spring. David Putts, Billon’s chairman, says that Billon has “a Polish heart” but wants to be seen as an international company.

That is why, despite having more than 50 engineers and a chief executive based in Warsaw, Billon moved its headquarters to London. The company wanted to take advantage of the UK’s regulatory “sandbox”, the Financial Conduct Authority’s programme that allows fintech companies to operate under a restricted licence and test their services in a real environment.

“UK is a fantastic market for us,” Mr Putts says, adding that if the company secures an e-money licence it plans to expand in the UK. Mr Putts says he aims to increase headcount by 50 per cent and move some of the operations to London.

A loss of financial passporting rights — which allow UK financial institutions to operate across the EU — would be a potential problem, Mr Putts says, but he does not believe Brexit will affect the company much. “From the commercial point of view, we are going to plough on,” he says. “We are more focused on PSD2 [the EU’s new financial service regulation] than Brexit.”

When Marta Krupinska moved abroad, she struggled to find a quick and affordable way to transfer money. It gave her a business idea — and that is how Azimo, a digital international money transfer service, was conceived.

She decided to start her company in London because of its supportive regulatory environment, access to capital, and central location. However, its operations centre — “the heart, spirit and brain of operations” as Ms Krupinska calls it — is in Krakow. She underlines that two branches of the company are equally important.

Ms Krupinska says that, if she had anticipated Brexit, she would have thought twice about London as a location. “Of course Brexit has an impact on the functioning of my company but it is not going to break it,” she says.

After the referendum result, Ms Krupinska received messages from Luxembourg, Amsterdam and Berlin inviting her to move her operations there. If things go badly in London she would consider a transfer, she says.

“Some people were surprised that I do not want to go to Poland if I have an office there. I do not trust the Polish regulatory authority . . . In the UK you can do anything unless it is regulated, in Poland, you can do only what is regulated. How can you make innovations there?” she adds.

“We have been scratching our heads and thinking — what can we do with Brexit,” says Daniel Stachowiak, chief executive of MyDocSafe, a tool that aims to simplify approval and signing of documents for companies such as banks and insurers.

The company’s board and its main clients are based in the UK while its technical staff are in Poland and Ukraine.

Mr Stachowiak says that he is most afraid of losing the freedom of movement for his staff. “I wanted to take my Ukrainian workers to a hackathon to the UK and they did not get a visa. I think the movement constraints will negatively impact the company’s mobility,” he says.

Like many financial companies, MyDocSafe might be hurt if UK and EU rules diverge. “This is an Armageddon scenario — it will be too hard for us to do business in the UK and in the rest of Europe. We will have to consider closing our operations here,” he says.

Artur Malek, marketing manager of Finanteq, has a great view from his office in eastern Poland, from his city’s highest office block. “We are a typical, local Lublin company — like a bakery, you know,” he says.

Unlike local bakeries, however, Finanteq operates globally. It has created a “superwallet”, a tool that combines banking, payments, and mobile commerce in a single mobile app, and provides it to international banks such as Crédit Agricole, Danske Bank, and National Bank of Kuwait.

The UK market is next in the company’s expansion plans. Mr Malek admits that Brexit is a problem but it will not stop his company.

“Fortunately, the Polish banking regulator is a very strict one and, in the countries we enter, we already fulfil all the regulatory requirements. Most probably we will be conducting our operations in the UK in the same way as we do in any other market outside the European Union,” he says.

He hopes that Brexit might also bring benefits if it prompts financial institutions to move their operations, especially back offices, to Poland. “This creates an opportunity for us to start co-operation with those companies,” Mr Malek says. 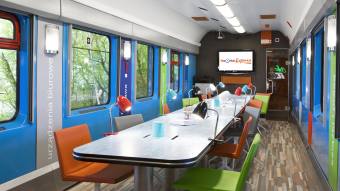