Artist Ibrahim El-Salahi: ‘When I work, I don’t feel pain at all’

When Ibrahim El-Salahi was imprisoned without trial under Sudan’s military dictatorship in the 1970s, being caught with writing tools risked two weeks in solitary. He furtively cut scraps of paper from sacks in which families sent prisoners fruit, and kept a pencil stub hidden. “I made small drawings,” he recalls, “and buried them in shallow sand.”

The artist, who has just turned 89, was reminded of his six months’ incarceration (“it felt like six years”) during recent bouts of sciatica. “Pain is the worst kind of prison,” El-Salahi tells me in his riverside home in Oxford, which he shares with his wife Katherine, an anthropologist. Kept from his studio by chronic back pain, he discovered a means of escape. “In my bedroom I was surrounded by empty boxes of pain­killers,” he says. “Trying to ease my pain, I cut some packets into pieces. I found the quality of paper wonderful, so I started drawing. When I work, I don’t feel pain at all.”

“Adam and Eve” became the first work in Pain Relief (2016-18), a series of almost 200 tiny ink drawings on medicine packets, envelopes and scraps to hand in moments of torment. They reprise motifs and techniques developed over six decades, including the abstract calligraphy he mastered as a founder in the early 1960s of what was later dubbed the Khartoum School. His surreal visual language, often in black and white, melds Arab, Islamic, Nubian, Coptic and western influences. Yet he “wanted to simplify and bring in fresh air and add colours which I’d ignored”.

Some images picture the body as a cage or a serpentine intestinal tract. In others, birds signal art and freedom. Unexpected found elements range from a Royal Mail mark to Braille. “Because of the terrible pain, and the desire to forget it, I was opened up to work that came from within, with no control,” he says. “The discipline I’d learned at art school in Sudan, and at the Slade,” where he was a scholar in London in the mid-1950s, “I forgot.”

The series will be exhibited together for the first time at 1-54 Contemporary African Art Fair in Somerset House. About 30 drawings have been enlarged into colourful unique screen prints, satisfying his frustrated desire for monumental scale. A selection will also be on show in a Saatchi Gallery Salon.

Since 2013, when El-Salahi became the first artist of African birth to have a Tate Modern retrospective (it had also been shown at Sharjah Art Museum in 2012), museums and collectors have raced to acquire work by this founding figure in African and Arab modernisms.

The “Prison Notebook”, with ink drawings made after his release from Khartoum’s notorious Kober prison in 1976, was acquired four decades later by MoMA, New York. Last year a facsimile was published with the first English translation. “By His will we teach the birds to fly”, a 1969 drawing acquired by the British Museum last year, is currently on display in its Islamic World Gallery until November 24. A 2018 solo show at the Ashmolean in Oxford, where he has lived since 1998, delighted him in displaying his works alongside Sudanese pottery: “I use the same geometric patterns and the same earth colour: it reminded me of sand storms.”

He was born in 1930 in Omdurman, Sudan’s largest city, where his father was a Sufi scholar, and learned calligraphy at Koranic school. The values of his upbringing sustain him. Recalling the lashes of a Koranic teacher against whom he retaliated, he says, “I never accept tyranny nor apply it to others.”

At the Slade, he admired artists from Giotto to Cézanne. But returning to Khartoum soon after independence in 1956, he was shocked by indifference to the painting he had mastered. “For two years I was completely silent. I believe work has a message, it has to reach people.” On travels across the country (including with the writer Tayeb Salih), he alighted on Sudan’s distinctive Arabic script. “Calligraphy itself is abstraction. I had to break the bone form of the letters to find out what they came from — animals, humans, voices, spirits. I worked like mad, reshaping the broken pieces together.” Of his stylised faces, “some people said, you’re making African masks. I didn’t think that at all. It’s the elongated face of animals, monkeys, camels. The way women cover their faces looks like a mask. The long, drooping nose is a sign of sadness. I care very much about the poor — those who can’t reach their ceilings of achievement. It’s an emotion deep in our souls.”

His first international exposure came through the Mbari Artists and Writers Club in Nigeria, pan-African workshops in the early 1960s. A few of his drawings are on show in Into the Night: Cabarets and Clubs in Modern Art at the Barbican Centre from October 4.

By the time he was accused of complicity in a failed coup, El-Salahi was under-secretary at Sudan’s culture ministry. His “Prison Notebook”, made under house arrest, was to “take away the bitterness and humiliation of being incarcerated for something I hadn’t done. It is a Sudanese custom to forgive. I find bitterness eats up a person.”

Exiled in Qatar for 21 years, “that no one knew I was an artist was a blessing in disguise. I developed how to use solid black on the clean white of the paper — I used crosshatch — to give a sensation of a grey tone. It took 17 years. This was after jail — it’s meditative, peaceful.”

Making no distinction between drawing and painting, he says black-and-white works “give the same satisfaction as colour”. On prison scraps, he also learned to group drawings round a nucleus. “The idea of the organic growth of a picture has stayed with me.”

Pain Relief helped him embark on his first large-scale work in years, about this year’s Sudanese uprising against the Islamist regime of Omar al-Bashir, and the power-sharing El-Salahi sees as flawed. “Young men and women went with their chests open to die not to let the army take over. But the army has its ways of keeping on . . . This, to me, is a betrayal of the people’s revolt.”

He has earmarked works for donation when a suitable national museum is created in Khartoum. They include his favourite from the 1960s, evoking the Last Judgment in red and ochre. “It’s in high demand — quite a few people want it,” he says with a calm determination. “But I prefer to keep it for Sudan.” 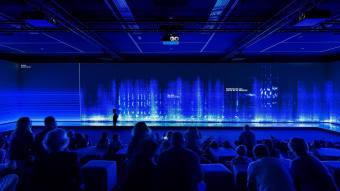