Telfar is rewriting the rules of ‘It’ bags

This summer, while most of the fashion industry was stuck in pandemic-induced stasis, the 15-year-old New York label Telfar was flourishing. Well before Covid-19 arrived, the brand decided not to produce a Spring/Summer 2021 collection to instead reset and refocus, inadvertently avoiding the sunk costs of a depressed sales season. Meanwhile, its handbag became a runaway hit that sold out every time a new batch was released.

Telfar was founded by Liberian-American designer Telfar Clemens in 2005. Unisex since day one, it’s favoured by a sociopolitically progressive, sexually and racially diverse set — one historically ignored by the industry. As Telfar’s star has risen, its supporters and collaborators have come to include vanguard creatives such as musician Solange Knowles and playwright Jeremy O Harris.

Clemens is inspired by the bonds we form with items so common most people hardly notice them. “If I keep seeing a thing appear to me — like, everybody has it — that goes in my book of things that I want to put my two cents into,” the 35-year-old Clemens tells me over a video call from Mexico, where he and Babak Radboy, his creative director and business partner, are on a working holiday. Clemens identifies something ubiquitous, then adds his own twists that, while often simple, can profoundly alter a garment’s tone. For instance: a polo shirt cut to be worn backwards, the collar spreading instead to frame the nape of a neck.

Telfar’s handbag emerged from this habit of everyday reconnaissance. Clemens explains: “When I saw people carrying a shopping bag during the holidays, specifically the Bloomingdale’s one, I was like, ‘Wow, they look so good. They just went shopping — look at the smile on their faces.’ ”

Clemens took the shape of the Bloomingdale’s shopper tote and applied his own finish, inspired by what he described to me as the “you just bought something” look — the haloed afterglow of a satisfying transaction. The bag is made from faux leather embossed with the brand’s logo, a T encircled by a C that evokes the emblem of a luxury house, or the symbol for a currency not yet minted. It’s surprisingly affordable coming from a designer brand, ranging from $150 for the smallest size to $257 for the largest. Clemens has said they are priced instinctively, based on his sense of what his customer would be able and willing to pay rather than the maximum he could charge. This rejection of the usual luxury logic captures the brand’s ethos of accessibility, and has helped it defy weakening demand for handbags in the US, where handbag sales declined 18 per cent between 2016 and 2019 according to NPD.

Clemens designed the bag for his Autumn/Winter 2014 collection, but it wasn’t widely available until 2018, when the label used the $400,000 prize it was awarded for winning the CFDA/Vogue Fashion Fund to scale up production. Its sales skyrocketed, propelled by a virtuous, viral cycle of fan-submitted images and memes featuring the bag, then reposted by the brand on its social channels. By mid-summer, Telfar was trending weekly on Twitter in the US, and new shipments began selling out “in one day, then a few hours, then minutes, then seconds”, Radboy says.

While many labels work hard to manufacture an illusion of scarcity, Telfar went in the other direction, announcing a program called Bag Security: a day-long, open pre-order on every colour of the bag, in every size.

In that 24-hour window, the label says it generated 10 times the sales it had in the entirety of 2019. The company is now on track to generate a comfortable eight figures in revenue this year, up from $102,000 in 2016 and $2m in 2019. Clemens and Radboy aren’t worried about oversaturation. Telfar’s slogan is “Not For You—For Everyone”, and the pre-order was a gesture grounded in this communal spirit — one that also happened to provide a huge influx of capital, giving the brand space to explore new avenues for growth. It’s something that could not have happened without the brand selling directly to its audience.

It’s also going towards beauty, which is a place that we want to be able to put our finger on

Radboy, 37, met Clemens in New York in 2004 and has been a crucial figure in the label’s growth since joining as creative director in 2013. In Clemens’ work, Radboy saw a genuinely unique perspective and approach — one that the mainstream industry seemed unsure what to make of. “The proposition was infection in the heart of the hegemony rather than a counterculture, and I was so into it,” he says. “I thought that this thing is so cool, all you have to do is communicate it in the right way. After a few years of working together, I started to understand that there was something wrong with the environment itself. That’s how we started to think about how you create your own space that people can come to rather than an active translation into an existing market.”

To create that space, Telfar sought support from unlikely patrons, such as department store Kmart, who sponsored a large-scale takeover of the New Museum in New York for Telfar’s Spring/Summer 2014 show, and burger chain White Castle, with whom Telfar has forged a shockingly fruitful bond that has led to Clemens designing genderless uniforms worn by all 14,000 White Castle employees and a joint charitable effort devoted to posting bail for minors held in Rikers Island, New York City’s largest prison. These unorthodox relationships have provided not only crucial funding — Radboy says they accounted for nearly half the label’s revenue at one point — but opportunities for Clemens to apply his perspective directly to the mass products his own label often reinterprets. As far as branded partnerships go, these have felt uncommonly generative, more than the sum of their parts.

Though the industry has finally embraced Telfar, inviting the label to open Paris Fashion Week last September and to show at Pitti Uomo as a special guest designer this past January, Clemens and Radboy told me these experiences have only reinforced something they’d realised around the time they won the Fashion Fund: the fashion establishment has little to offer them that they couldn’t offer themselves, or that they would even want. “You end up giving your creativity to the industry rather than building yourself,” said Clemens. “You’re getting 10 per cent of what you’re worth.”

Telfar is still stocked by major retailers like Browns and Ssense, but moving forward, Clemens and Radboy envision growing their direct-to-consumer business and pairing it with what Radboy calls a “media cultural entity — whatever that is in 2020”. It could, the pair mused, be a traditional TV show, or an app — whichever format provides the most unfiltered conduit between the brand, its collaborators and their audience.

For now, the label continues to expand its product offering. Last week, they launched do-rags — “the cornerstone of black hair care”, says Clemens. “Add it to a list of things that I actually use in my daily life, something that I want and need. It’s also going towards beauty, which is a place that we want to be able to put our finger on.”

“We’re starting to make this alternate reality department store,” adds Radboy. “What are the departments in Telfar? We’re not trying to offer the same things other people have.” 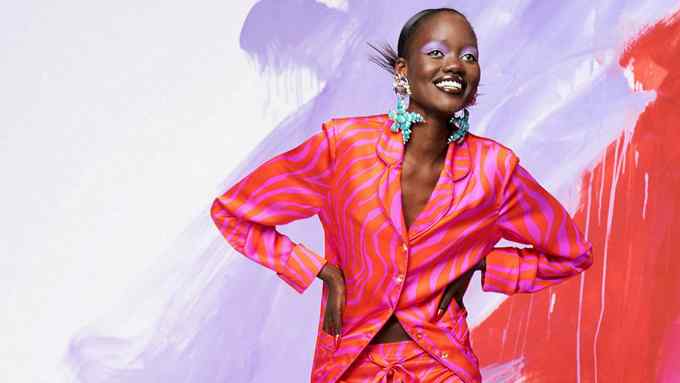