We’ll send you a myFT Daily Digest email rounding up the latest Habitat for Humanity news every morning.

In a series of moving accounts, four people share their experiences of building homes for those in need

We’ll send you a myFT Daily Digest email rounding up the latest Habitat for Humanity news every morning.

Habitat for Humanity, the FT’s Seasonal Appeal partner, is a global non-profit housing organisation that builds or improves homes for those affected by disaster or inequality.

Habitat runs volunteer programmes across the world. Volunteers generally offer their services for anything from a few days to a fortnight. Working alongside experienced craftsmen, they assist with various stages of the house-building process at whatever level of difficulty they are comfortable with.

Volunteers are drawn both from the countries where they live and overseas. Last year, a total of 12,700 international volunteers worked on projects around the world. They participate in teams - either with friends, family, colleagues, or as part of open groups. Many workplaces encourage team trips. Volunteers are expected to raise the funds for their trip, though Habitat provides resources and advice to help fundraisers.

Together, volunteers help those less fortunate to secure affordable housing. Some of them regard Habitat as a household name, others sign up after hearing about it at work, through word of mouth or on social media. All those the FT spoke to had a shared enthusiasm: not just for the work they had done, but in their decision to return and build again — and to encourage others to join them.

Livi is 30 and works in the insurance industry in Scotland. She volunteered for her first build in Cambodia in 2016

Before I volunteered at my first build in Cambodia, I had no idea that I would have four trips booked within the next two years. The builds surpassed all expectations.

Volunteering for Habitat is unlike donating to any other charity I know, because you physically go and input that money into the country and into the families who need it.

In Malawi, on my second build, we were constructing a house on the block of land where the family was already living. I built for Tesha, her three boys and her little girl, Princess, who was six or seven months old.

You wake up to the birds tweeting and have breakfast with the team. When you arrive at the site, you’re handed a shovel, a trowel or whatever else you need, and start work. You could be digging, laying bricks, making stoops, collecting water, mixing the concrete. Generally, there are skilled tradesmen on-site to shout at you when you’re going wrong or pull your bricks off and tell you how to do it properly.

On my second build, the head builder came over to me and said: “You’ve done this before!” You very quickly learn skills. It’s just about having willpower and determination. Age doesn’t matter. Skillset doesn’t matter. It doesn’t matter whether you sit at a desk all day or whether you’ve been a housebuilder all your life, you can do it.

We were in a community with a lot of children, so in our lunchbreaks the children would come up and ask us to play. We’d spend a whole hour kicking footballs, blowing up balloons, drawing, colouring. When they saw bubbles — just bubbles that our kids over here see at every single party — these kids were overwhelmed because they’d never seen them before.

On our last day we did a road trip around a few Habitat houses and one of the defining moments I’ve had on a Habitat build was driving past a man’s Habitat house. He was sitting on his stoop as we drove past and from the moment he saw our bus, he stood up from his seat and jumped for joy. He was punching the air and shouting: “Yes, Habitat!”

Madison, a FT Special Reports journalist, volunteered with Habitat for Humanity between 2009 and 2013 while at university

What university freshman with even a lick of sense decides to tumble out of their dormitory and head to a loud, hot construction site to perform physical labour early every Saturday morning? Me, that’s who.

When I first volunteered with my university’s Habitat for Humanity programme, I was scheduled to build on Saturday mornings. Bleary eyed and grasping bottles of water, my fellow volunteers and I wore hard hats and wielded hammers and attempted to follow the instructions of the professional builder supervising us.

The five cottages were located in a low-income neighbourhood, just a short walk from campus in Charlottesville, Virginia, a town divided across racial and economic lines. The lowest-income neighbourhoods run up against university buildings and student housing.

Students, preoccupied with their studies and social lives, often give little thought to the communities around them. People move in and out of pricey student apartments before finally moving to new homes in new cities. Housing insecurity after graduation is a remote concept.

Each Saturday, we watched as a small neighbourhood took shape. From concrete foundations, houses appeared. I pounded nail after nail into wooden skeletons. The subsequent drywall masks more than a few failed aims.

Before the walls are installed, volunteers and community members write on the wooden frame. They etch messages of encouragement and support into the bones that will become someone’s home. The many hands and hours that pull Habitat houses together imbue them with something special and helped me feel part of the larger Charlottesville community.

Volunteers may experience only a small part of the long process of creating a home, but you know you will always be a part of that building (in my case, in the form of the extra dents in the beams). Fellow volunteers became great friends and the following year I spent spring break on a Habitat build trip to South Carolina.

Volunteering for Habitat, without a doubt, was one of the smartest decisions I made during my academic career.

Alex, who is 26 and grew up in Lebanon, lives and works in Dubai and volunteered in Jordan this year

I heard about Habitat for Humanity when I was 16. I grew up in Lebanon, and Habitat was doing builds there. As soon as I had a chance — once I was working and had a salary — I joined in, which was in March this year in Jordan.

Obviously in a week you can’t build a whole house. One volunteering group will work on the foundation, the next group on the following stage. We built the walls and the windows, and I believe the group after us put in the electricity and plumbing.

You don’t need to have any particular skills. People were carrying sandbags, others mixing cement. I’m only 26, but we had people with us in their 70s, men and women. They were working under the sun, all day, not complaining, mixing cement. People from all walks of life come and work at the same level.

You really get the sense you’ve met the whole village where you work, and understand its dynamics — like you’ve become a part of the community in a way. By the end of this trip we’d met the teachers, we’d met the school principal, we’d even met the local doctor.

In the evening we went to the house of a past Habitat beneficiary. It was a lovely way to finish the day, to see what the previous efforts had resulted in. The families prepared these huge meals and you break bread together and join them. The Middle Eastern way of eating is sitting on the floor, on a carpet, eating with your hands. It’s a very communal way of sharing a meal. Afterwards, I would teach the other volunteers a Middle Eastern variant of bridge I know, called Tarneeb. I really felt like I was part of something.

The last day was emotional. The wife and husband came with their children to see all the walls standing, and said some words. We really felt like the week had been an achievement, and that we had shared something with them too.

Andrei works for Bosch in Romania. The 39-year-old recently went to Malawi for a Habitat build

I’ve been involved for many years with Habitat for Humanity in Romania. Last year, as part of the Big Build project, we built 36 houses in five days. Every day, 550 volunteers were in the construction area. Across the five days, there were 900 participants. There were so many volunteers from all over the country.

We learnt how to build a house from the first piece of wood to the last piece of the roof. At the end of the time we were there, the houses were 100 per cent ready externally, and at least 70 per cent internally.

This year I also went to Malawi for a build. I was part of the first Romanian volunteer team to go to Africa. As a volunteer, I think we donated far more than money or anything material. We donated our time and that’s what feels significant.

As there’s no electricity, you can’t use power tools — you’re just working with your hands. But it’s not the work that’s hard, it’s the emotion. I cried a lot, but I was also angry . . . angry that on this earth the discrepancies are so vast between countries and continents.

We were 14 volunteers who didn’t know each other. But we created such a strong group — we felt like a family. It was an incredible experience. I’m still in contact with many of the volunteers. I’m even meeting some this evening. I came back from Malawi a month ago, but I still talk daily to them. We’re very different and from different parts of Romania, but we all have one thing in common: a big heart.

If you’re interested in volunteering for Habitat for Humanity, you can find out more at: https://www.habitat.org/emea/volunteer

Explore the series
READ MOREFT Appeal for Habitat for Humanity
Too cold to live in: how families in Macedonia are rebuilding their homes 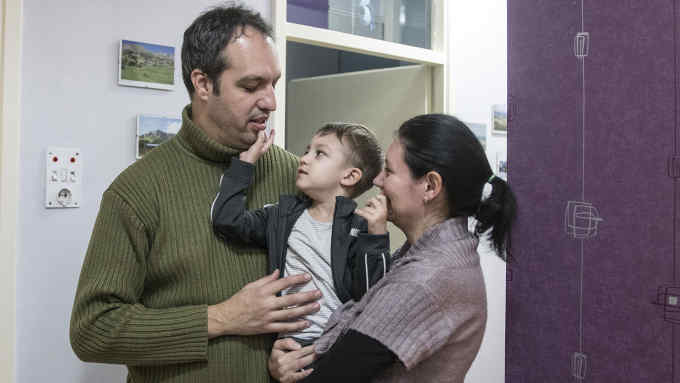