From tax to trade: where Joe Biden stands on the big issues

During the Democratic primary, Joe Biden’s opponents attacked him for being heavy on charm but light on policy. But as the party’s candidate, he put together a detailed platform that contains some of the most radical proposals by a Democratic nominee in recent history.

Here is where Mr Biden stands on some of the big issues.

One area where Mr Biden shows his intentions most clearly is on tax.

He has promised to undo Mr Trump’s tax cuts, which gave relief to richer households and businesses by moving the top rate of income tax back up from 37 per cent to 39.6 per cent. He would also raise corporate tax from 21 per cent to 28 per cent — though not all the way to 35 per cent, where it was before Mr Trump’s cuts. And he has proposed setting long-term capital gains tax for those earning more than $1m at the same level as income tax. That would mean a jump for top earners from 20 per cent to 39.6 per cent.

Mr Biden has talked about using the extra income from these taxes on infrastructure, and green infrastructure in particular. Such a move is likely to require the consent of Congress, meaning he needs Democrats to take back the Senate to achieve his vision.

Healthcare and the pandemic

If he becomes president, Mr Biden’s first challenge will be tackling the coronavirus pandemic, which public health experts warn could have particularly dire consequences this winter as it overlaps with flu season.

Mr Biden has promised to make tests free and widely available, as well as force insurers to cover all costs of preventing and treating Covid-19. He also pledged to enact emergency paid leave for workers affected by the virus, as the first step towards introducing paid leave for all workers.

But the biggest difference with Mr Trump’s approach to coronavirus is likely to be on messaging — Mr Biden has promised to put public health officials at the forefront of crafting the policy response. This contrasts with the current president, who has occasionally attacked scientists such as Anthony Fauci, the head of the National Institute for Allergy and Infectious Diseases.

In the longer term, Mr Biden has vowed to enact healthcare reforms that would ensure more people get insurance coverage under the Obama-era Affordable Care Act, which the Trump administration has scaled back.

Without the backing of Congress, however, Mr Biden will be able to do little more than enact some of the measures already promised by Mr Trump to bring down drug prices, such as making pharmaceutical companies peg some of their prices to those they charge abroad.

Mr Biden is in a precarious position on trade. On the one hand, he has attacked Donald Trump for his trade war against China, which he said has protected large businesses while hurting ordinary American workers. On the other, the Democratic candidate does not want to appear soft on China or too big a fan of free trade, and so has promised a “pro-American worker trade strategy”.

Like Mr Trump, Mr Biden said he intends to take “aggressive trade enforcement actions” against China or anyone he believes is guilty of currency manipulation or other anti-competitive trade practices. But he has said that unlike Mr Trump, he will enlist the support of US allies to do so on a multilateral level.

One major difference with the current president is Mr Biden’s plan to levy a “carbon adjustment fee” on goods coming from countries that fail to meet climate and environmental obligations. This, he said, will stop highly polluting countries undercutting manufacturing in the US.

For the finance industry, the most important thing about Joe Biden is that he is not Elizabeth Warren.

The Trump administration has loosened post-crisis regulatory regime around the edges. Mr Biden, for his part, has kept mostly quiet about Wall Street. In the past both he and his running mate, Kamala Harris, have supported the idea of a financial transaction tax, but he has not made it a key part of his platform.

Even though she’s out of the race, the spectre of Ms Warren still hangs over Wall Street. 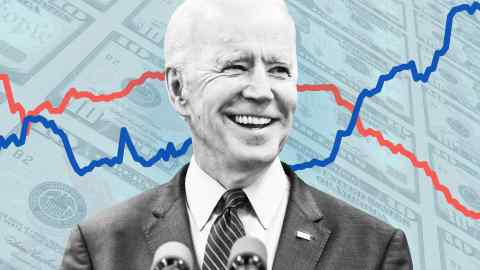 “Personnel is policy,” said Isaac Boltansky, a policy analyst at Compass Point. “Whether she is in the cabinet or remains just the senior senator from Massachusetts, she will dictate terms on financial policy — and will do so by pushing nominees for key positions”, for instance at the Federal Reserve, the Consumer Financial Protection Bureau she was instrumental in creating, and elsewhere.

Silicon Valley executives looking for an indication of how Mr Biden is likely to change technology industry regulations have little to go on.

Mr Biden has called for Amazon to pay more tax, and for the repeal of Section 230, which guarantees social media companies immunity from libel cases based on content uploaded by users. But so far he has said little about privacy or antitrust, the two biggest regulatory challenges facing the industry.

Tech industry executives have been heartened by the choice of Kamala Harris — a California senator who has opposed Ms Warren’s tough stance on antitrust — as his running mate.

But they might be more concerned to see that the campaign is hosting a “virtual conversation” about antitrust policy later this month hosted by Amy Klobuchar, the senator from Minnesota, and David Cicilline, the representative from Rhode Island.

Both members of Congress have been prominent proponents of taking tougher action to break up the largest US technology companies.

Mr Biden was part of the Obama administration, which oversaw spectacular growth in US oil and gas production. As president, he would launch a different energy revolution aimed at decarbonising the US power generation system within 15 years and delivering an economy with net-zero emissions by 2050.

He would spend $2tn over four years to add vast renewable-energy capacity, electrify much of the transport system and research new technologies, from advanced nuclear facilities to green hydrogen, grid-scale batteries to carbon capture and storage.

Mr Biden said this would create millions of jobs, in everything from electric-car manufacturing to the installation of new clean-energy infrastructure, and has touted it as a way to drag the US out of its pandemic-induced recession.

Mr Trump has tried to portray this as a radical plot to destroy the US’s world-beating oil and gas business, claiming Mr Biden would ban fracking, the production technique critical to the shale industry in swing states such as Pennsylvania.

Mr Biden would ban new drilling on federal lands. But he would not ban fracking, even though he has pledged to crack down on methane emissions and other pollution from the oil and gas industry.

Mr Biden said he does not have a foreign policy, he has a “plan for restoring American leadership”. That counts as music to multilateralists’ ears: a promise to undo the isolationist instincts of the Trump administration that have appalled close allies and undermined US participation in international institutions.

A Biden administration is set to return US foreign policy to a more familiar kilter — snug relations with Europeans and traditional allies, unswerving commitment to tackle climate change — rejoining the Paris climate change accord and pushing countries to set exacting, enforceable targets — and restarting nuclear talks with Iran.

But his administration would face a world altered by the pandemic, with many countries at risk of debt distress and questions about US reliance on China for supply chains.

A Biden administration would seek to lead a global coronavirus response and rejoin the World Health Organization, from which the Trump administration has withdrawn.

Mr Biden has pledged to reverse Mr Trump’s controversial immigration policies through a number of executive actions that would undo his predecessor’s draconian approach. 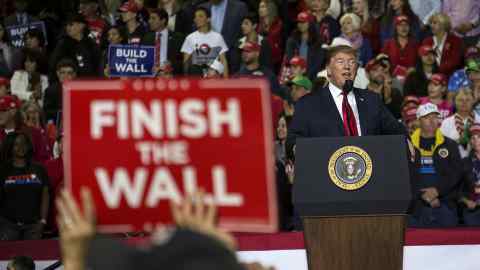 They include raising the annual cap on refugees to 125,000 from the 18,000 ceiling set by Mr Trump, narrowing deportation efforts to target only people convicted of violent crimes, and cancelling policies that make it harder for people to claim asylum at the US-Mexico border.

These policies lie well within Mr Biden’s executive authority, allowing him to act without Congress. More expansive pledges — like a path to citizenship for 11m unauthorised immigrants — would require legislation that has eluded previous presidents.

But even where Mr Biden would have authority to act unilaterally, an immediate rollback of Mr Trump’s policies could prove politically fraught, according to Muzaffar Chishti, a senior fellow at the Migration Policy Institute. Moves to loosen Mr Trump’s restrictions on asylum, for example, could encourage an increase in numbers of people attempting to cross the US-Mexico border.

“The last thing the president wants is the spectre of uncontrolled borders,” said Mr Chishti.