China is going back to work as the coronavirus pandemic recedes there and is demanding “lots of raw materials”, according to the chief executive of global mining group Rio Tinto.

“From what we are seeing, China is restarting. And as far as we are concerned, China is demanding lots of raw materials and we are doing everything we can to deliver those products,” said Jean-Sébastien Jacques.

Rio is one of the world’s biggest producers of iron ore, the key ingredient in steelmaking, and generates more than $25bn of sales from China, which it also supplies with copper and bauxite, the raw material needed to make aluminium.

“I have been asking my colleagues in Shanghai and Beijing to look out the windows and tell me if trucks are moving, if cranes are operating. The Chinese are going back to work and the highways are full,” Mr Jacques said.

He spoke after data showed that China’s economy, which has been the engine of global growth for the past two decades, shrank by 6.8 per cent in the first three months of the year, ending an era of uninterrupted growth dating back to the late 1970s.

According to economists, the fall in gross domestic product will increase the pressure on Beijing to provide further stimulus. Mr Jacques said he was certain China would respond.

“What we don’t have full visibility of today is around the type of stimulus package China is going to put in place. Will it be similar to the one put in place after the global financial crisis? I’m not sure. But I have no doubt there will be one,” he said.

Mr Jacques’ comments came as Rio said its order books were healthy and it had shipped 72.9m tonnes of iron ore in the three months to March, up 5 per cent on a year ago.

The price of iron ore has been resilient this year, averaging $88 a tonne, supported by a series of supply disruptions and robust demand from steel mills in China.

That has benefited Rio, which is producing iron ore from Western Australia at a cost of just $14-$15 a tonne.

While China has started to recover, Rio said the outlook in the rest of the world was less certain.

Demand for aluminium shrank in the first quarter of the year as carmakers shut plants in response to the spread of coronavirus and plunging sales.

Rio said global inventories of the metal had risen to 3m tonnes, from 2.2m at the start of the year — a stockpile analysts say will take years to be absorbed. 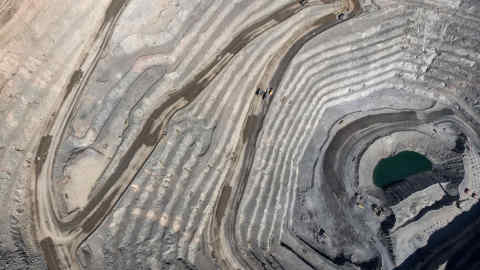 Rio has put its aluminium smelters in New Zealand and Iceland under review for possible curtailment or closure.

“We continue to expect that Rio will close both the Tiwai Point and ISAL smelters this year,” said Tyler Broda, analyst at RBC Capital Markets.

Rio also said progress on its multibillion-dollar expansion of a huge copper project in Mongolia had slowed because of difficulties bringing in skilled staff.