We use cookies (opens in new window) for a number of reasons, such as keeping FT Sites reliable and secure, personalising content and ads, providing social media features and to analyse how our Sites are used.
Manage cookies
Accept & continue
FT Series The financial crisis in charts
See all 25 stories
FT Data European companies

Who was convicted because of the global financial crisis?

In the decade since the beginning of the credit crisis, US authorities have collected $150bn in fines and consumer relief from financial institutions. But it is another statistic that garners more attention: zero Wall Street chief executives have been prosecuted.

The US authorities have said this is due to a lack of evidence, not a lack of effort, but that does not help quell populist outrage.

By contrast, Iceland has prosecuted the chief executives of three large banks and 23 other bankers, according to Ruv, the Icelandic state broadcaster.

The UK brought the first criminal case against a global bank chief executive in June, when it announced charges against John Varley and three other Barclays executives.

In the US prosecutors have won convictions of 324 mortgage lenders, loan officers, real estate brokers, developers and others who were at the front end of a chain of events that contributed to the crisis, according to Sigtarp, the federal agency overseeing government bailout funds.

Wall Street was at the other end of the chain, packaging up and selling unsafe or fraudulent mortgages to global investors.

The most senior executive convicted was Lee Farkas, the chairman of Taylor Bean & Whitaker, a Florida mortgage lender that was at the front end of the chain. Taylor Bean’s collapse caused the failure of Colonial Bank, at the time one of the biggest in US history.

On Wall Street, and not included in Sigtarp’s count of credit crisis-related cases, one trader, Kareem Serageldin of Credit Suisse, went to prison after pleading guilty to inflating his portfolio of asset-backed securities.

The labelling on the chart has been amended for clarity 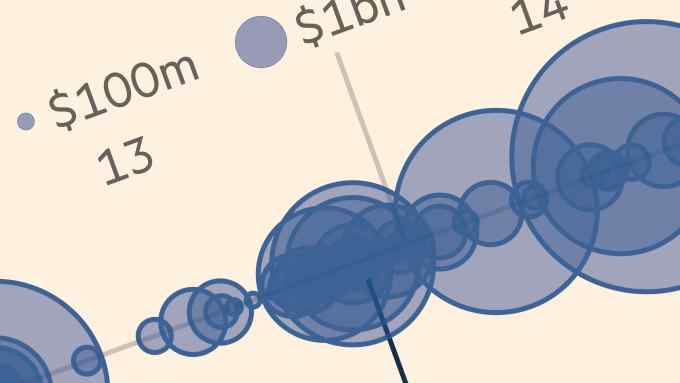