We’ll send you a myFT Daily Digest email rounding up the latest Refinitiv news every morning.

The London Stock Exchange Group has confirmed that it is in advanced talks to buy Refinitiv in a $27bn deal that would turn it into a global exchanges and data powerhouse.

The statement came after discussions between the parties were revealed by the Financial Times earlier on Friday.

The acquisition of Refinitiv, carved out of Thomson Reuters only last year in a deal with Blackstone, would transform the LSE into the main rival to billionaire Michael Bloomberg’s financial news and data empire with annual combined revenues of more than £6bn.

In a statement issued after Friday midnight in London, the LSE said it would pay for the transaction entirely with the issuance of new shares. That will result in Refinitiv shareholders owning about 37 per cent of the combined group, though they will have less than 30 per cent of its voting rights.

The LSE closed on Friday with a market value of about £19.3bn and a net debt of about £1bn.

Refinitiv, whose Eikon terminals are the main rival on trading floors around financial centres to Bloomberg, was valued at $20bn last year. The group was bought by a private equity consortium led by Blackstone, which acquired a majority of the business from Thomson Reuters, the news and data group.

The consortium used a large amount of leverage to pay for the deal, with net debts at Refinitiv standing at about $12.5bn at the end of last year. At an enterprise value of $27bn, that means the LSE plans to issue about $14.5bn in new shares or more than £12bn to pay for the deal.

If consummated, the deal would instantly transform the LSE, which is best known for running stock exchanges and clearing derivatives, into a more diversified market data and analytics leader under David Schwimmer, the former Goldman Sachs banker.

Mr Schwimmer was named chief executive of the LSE last April after a months-long search to replace Xavier Rolet, the Frenchman who ended his eight-year run at the group following a governance crisis. 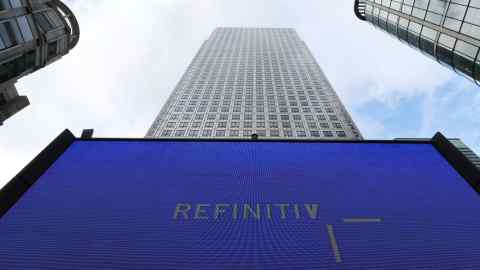 It added that it aimed to achieve annual cost savings of more than £350m within five years of a deal. Don Robert, LSE’s chairman, and David Warren, chief financial officer, are to keep their roles, along with Mr Schwimmer.

The talks come at a time when London’s role as a global financial centre is facing questions, with the UK preparing to withdraw from the EU under Boris Johnson, its new prime minister.

Only 18 months ago, the Blackstone-led consortium, which included Canada Pension Plan Investment Board and Singapore state fund GIC, agreed to purchase a 55 per cent stake in the financial and risk division of Thomson Reuters, with the latter retaining the minority stake in the division, Reuters newswire and other units.

The consortium had agreed to pay Reuters News a minimum of $325m a year for 30 years as part of the deal.

Since then, the investors rebranded the business Refinitiv and embarked on a cost-cutting campaign to make the business more efficient. In its statement, the LSE said Refinitiv reported net revenues of $6.3bn and earnings before interest, tax, depreciation and amortisation of $1.6bn.

Shares in Thomson Reuters, which holds a 45 per cent stake in privately held Refinitiv, jumped 4.3 per cent in New York trading on the FT report. It later issued a statement confirming the talks and said it would emerge with a roughly 15 per cent stake in the LSE after the deal.

Refinitiv had been expected to sell some assets after Blackstone took control of the company. It still retained a majority stake in fixed income trading platform Tradeweb, after listing shares in the group earlier this year.

It also had been in talks with Deutsche Börse to sell its foreign exchange business FXall, an electronic currency trading platform worth about $3.5bn. Deutsche Börse issued a statement on Saturday, saying those talks had all but ended.

The transformation of the LSE that put it in a position to double in size through this deal began under Mr Rolet, who stepped down as chief executive of the LSE in the autumn of 2017. The former banker spent more than £4bn on acquiring data and clearing businesses, responding to the evolution of markets after the financial crisis.

Among the most high-profile deals were the purchase of index compilers Russell Investments and FTSE International, 50 per cent of which it already owned. It also bought a controlling stake in LCH, the clearing house. Most notably, Mr Rolet attempted a merger with the LSE’s main European rival, Deutsche Börse, which collapsed in March 2017.

Refinitiv would bolster the LSE’s existing data and analytics offerings, which include Mergent, a service providing information on private companies, and XTF, which focuses on exchange traded funds. The group also owns The Yield Book, a fixed-income indexing service.

Exchange groups in the US and Europe have built up their data and analytics offerings in recent years as trading in stocks and bonds has become more electronic, relying on faster data sources that they can charge a premium for.

Robey Warshaw, Goldman Sachs, Morgan Stanley and Barclays are working with the LSE, while Evercore and Canson Capital Partners are working with Refinitiv and its owners, according to people involved in the deal.

Get alerts on Refinitiv when a new story is published