Chinese parents find new ways to give their children an edge

“I’ve just dropped off my son at debate class,” says Colin, a Shanghai-based entrepreneur. He is calling from his car on a Sunday afternoon, the sound of the city’s bustling streets transported over the crackly phone line. Colin, who asked not to be identified by his real name, is stuck in traffic, one of the millions of parents in China ferrying children between a procession of mind-enhancing and physically challenging weekend activities.

After his 14-year-old son finishes class at a prestigious Shanghai private international day school, he is thrown into a weekly routine of online Spanish tutoring, debate training and football competitions. Colin wants to give his son a shot at gaining entry to a top-tier Ivy League university in the US.

But, in July, Beijing sent a wrecking ball through the $100bn-a-year tutoring industry when it banned for-profit tutoring services for core curriculum subjects, part of a policy aimed at reducing childcare costs to help boost China’s low birth rate. “The sudden change brought anxiety to parents, accustomed to arranging lots of extracurricular activities because of the competitive schooling system,” says Yu Yali, a Shanghai-based career consultant and mother. 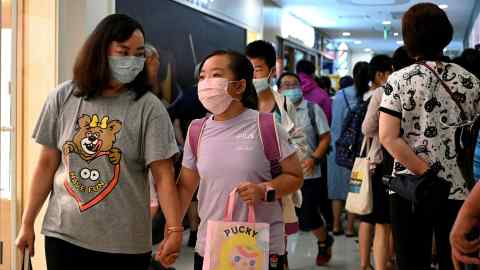 Since the move, parents have been seeking new ways to give their children an edge in the cut-throat university entrance examinations. Instead of signing up for foreign language classes, barred by the regulations, parents instead opt for non-core curriculum subjects like art, which are taught in English, says Ekaterina Kologrivaya, co-founder of Edtech Expand, a Beijing-based consulting start-up.

Many of the large tutoring companies have closed their physical classrooms, transferring online to save costs. But Beijing barred local firms from hiring tutors located overseas, driving up demand for the depleted number of foreign teachers in China, unable to get into the country due to strict border controls. This has pushed up the prices of classes taught by foreigners, including debate classes, another crafty way for students to master prized English skills while abiding by the new rules.

Parents at the debate school attended by Colin’s son fork out up to RMB17,800 ($2,784) for one semester of weekend debate sessions. “The price increased by 50 per cent from last year,” Colin says. “Even for me, the price was surprising, and I’m wealthier than most. Luckily, I can afford it.”

Meanwhile, tutoring companies and cram schools have either collapsed or gone through a rapid restyling. New York-listed New Oriental which, before the regulations struck, had over 5m children enrolled in after-school courses, is finding new lines of profitability. These include “new concept camping” holiday courses where children stay at university campuses with classes in the day. The company’s stock is 90 per cent below its peak in February.

“Chinese parents still want the best education for their children,” says one foreign investor with a Shanghai-based investment fund focused on consumer companies. “The market will find a way around restrictions when there is strong demand and willing supply for a certain product or service,” he says.

Leo Lewis
Can anything control a new generation of tiger parents? 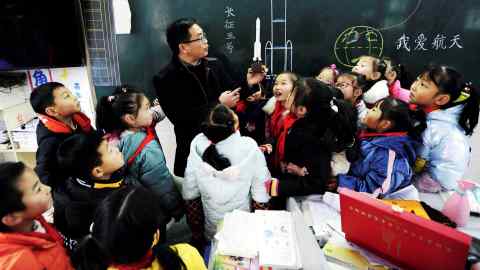 There are some parents who agree with the government’s aim of reducing the students’ burden. “Children, like my five-year-old son, have less homework and tests so have time to cultivate hobbies and become independent,” says Yu. But others are turning to the burgeoning underground market for ex-tutors masquerading as “high-end housekeepers” to secure personalised teaching for their children.

Zhipin and Liepin, two local recruitment websites, are strewn with adverts posted by parents looking for domestic staff with bachelor’s degrees and foreign language skills who will help “look after their children” — with no housework skills required. One post on Zhipin states: “A family with two children, aged six and 13, looking for a nanny that has graduated from a famous university, who is not too old but also has experience working as a live-in tutor. Monthly salary RMB24,000-25,000 ($3,758 to $3,915).”

However, parents have to tread carefully when arranging extracurricular training. The education ministry has vowed to crack down on families circumventing the rules and encourages the public to report neighbours seen inviting tutors into their homes. Now, as the tutoring industry emerges from Beijing’s ban with watered-down curriculums and weaker cash flow projections, moneyed Chinese parents are concerned that private schools will be next to face a regulatory assault in the government’s campaign to achieve “common prosperity”.

In May, the central government stopped approving licenses for new private schools for the compulsory years of education after announcing a target to reduce the proportion of children who attend such schools from more than 10 per cent to less than 5 per cent by the end of next year. Some provincial authorities have since moved to bring bilingual private schools — that adhere to foreign curriculums yet cater for local students — closer in line with the tightly-regulated state school system. 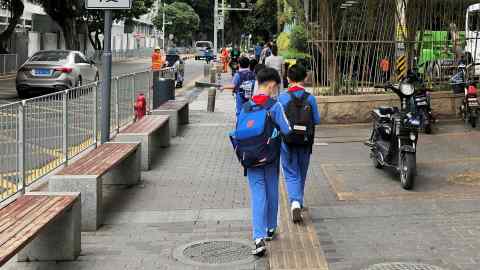 “Chinese applications to UK and US boarding schools are soaring,” says Colin, driven in part by uncertainty about the direction of the regulations on domestic private schools.

These schools have largely operated outside the purview of local educational authorities, hiring foreign teachers and adhering to curriculums set by overseas exam boards. But authorities are starting to put pressure on the schools, including in Shanghai, where they have been forced to use the same textbooks as state schools when teaching Chinese literature, politics, history and geography.

Emma Vanbergen, co-founder and president of BE Education, an educational consultancy advising Chinese families on overseas studies, says interest in UK boarding schools is picking up after plumetting during the pandemic. “It is hard for the students who went this September. Most will spend an entire academic year without seeing their parents if they go because of the two-week hotel quarantine coming into China,” says Vanbergen, referring to the personal disruption involved.

Colin is mulling the next step for his son’s education. He says he has donated “a tonne of money to a high school in the US” as a back-up option if his son decides to exit the Chinese system before going to university. “But who knows when we would be able to see him if he goes? The regulations make it very difficult to plan for our child’s future.”