European bank ETFs lose out as investors flock to US counterparts

Exchange traded fund investors are shunning European banks and flocking to their US counterparts, ignoring valuations that have plunged to their lowest in decades.

The sector last month sank to its lowest level on record as the Stoxx Europe 600 Banks index spiralled below its 1992 nadir. Yet bargain hunters are still thin on the ground.

US bank ETFs have enjoyed net inflows every month since March as investors seek to increase exposure to a sector trading at 1.2 times book value and 16.2 times trailing earnings, according to the S&P Financial Select Sector Index.

Yet despite Europe’s banks now trading at a price-to-book ratio of just 0.67 and 8.4 times earnings, according to the MSCI Europe Financials Index, investors are continuing to withdraw money from European bank ETFs.

“The outflows are very significant, $350m from European bank ETFs at the end of September [whereas] American bank ETFs have had inflows of over $1bn so far this year,” said Anaëlle Ubaldino, a quantitative financial adviser at Koris International, a French investment advisory firm.

Interest rate differentials are a prime driver of the divergent performance. Eurozone deposit rates have been negative since 2014, severely limiting the spread banks can charge between their lending and deposit rates. In contrast, the US federal funds rate was above 2 per cent last year, although it has fallen to virtually zero amid the coronavirus pandemic.

“The main impact that has really hurt the European banks has been ultra-low interest rates. The ECB’s negative rate policy has been very painful for bank earnings. It’s been going on for six years and the longer it continues the more painful it becomes,” said Stuart Graham, founder of Autonomous Research.

The eurozone “has struggled economically as a bloc” in recent years, he said, with GDP growth weaker than in the US, while “several European banks have been hit with large fines for failures in their internal controls”, in areas such as money laundering. He also pointed out that this year BNP Paribas, Société Générale and Natixis, “have seen their large derivatives trading operations lose significant sums”.

Structured products have been another “standout loss centre”, whereas many US banks have had very profitable trading operations, Mr Burckett-St Laurent said. “From a management control perspective post-GFC, US banks might have done a better job, apart from Wells Fargo.”

Amrit Shahani, research director at industry monitor Coalition, said the biggest factor in favour of American banks had simply been their scale.

“The US banks compete in every product in every market. They managed to pick up any revenue uptick, and cost has been managed better,” he said.

“The European banks are more specialised,” he said, pointing out that between 2012 and 2014 a lot of them reduced the scope of their global franchise, with many cutting their credit operations, meaning they “missed out completely” amid a global hunt for yield.

With US interest rates tumbling to euro-like levels this year, American banks have been hit by the fallout, with the sector down about 23 per cent so far this year. Yet this is still less than the 29 per cent slide witnessed in Europe, where rates have been unchanged, meaning the valuation differential has opened still further.

As to why the narrowing rate differential has not helped to close the valuation gap, Mr Graham said US banks still benefited from the absence of negative rates and a slightly steeper yield curve, allowing them to make money from maturity transformation.

“The question is will the US be stuck at zero?” he said. “In Europe the expectation is that there is another four-five years to go,” whereas in the US “people start dreaming about the Fed raising rates in 2023-24.”

Mr Burckett-St Laurent said the continental divide could narrow in the event of a Democrat victory which is expected to usher in an era of tougher financial regulation and enforcement “that could be a headwind for US banks”.

Mr Graham said European banks had room to improve their own fortunes. “They are on their knees in some ways, when you look at valuations, but it’s really in their own hands,” he said. “Are you going to be aggressive on cost cutting and consolidation?” 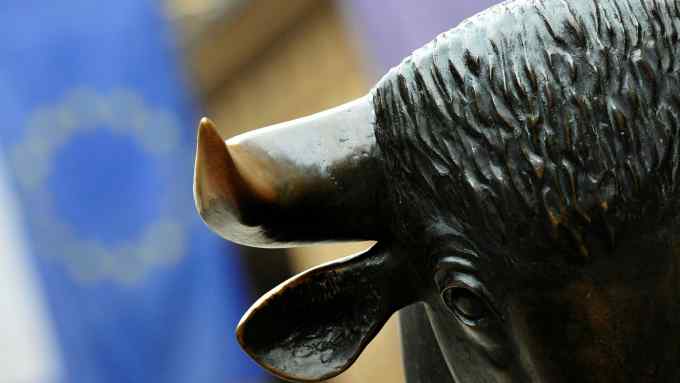