Armor-lux has dressed everyone from Pablo to the postal service

First introduced in Brittany as part of the French Navy’s official uniform in 1858, the original Breton shirt featured 21 stripes – a nod to each of Napoleon’s victories – which were designed to make it easier to spot sailors overboard. By the 1950s and ’60s, the humble workwear garment became a signifier of easy-going Gallic style, adopted by everyone from Coco Chanel and Picasso to Brigitte Bardot and Jean Seberg. It has remained a wardrobe staple ever since. Though the design can today be found on most high streets, few of the original purveyors of the marinière remain.

Found on a cobbled street among the colourful half-timbered houses in the medieval Breton town of Quimper, Armor-lux, with its white façade, is the last manufacturer of the Breton in the region. Founded by Swiss engineer Walter Hubacher in 1938, the company has been making striped tops out of its Breton factory ever since, and is an emblem of seafaring style around the world, with fans including Alexa Chung, Kate Moss and A$AP Rocky. “What makes the Armor-lux shirt so special is that it comes from the place where the Breton shirt originates from,” says the brand’s export director Marco Petrucci. “We are the last supplier in Brittany to make the shirt all under one roof, from the knitting to the assembling.”

Using organic cotton, the fabric for Armor-lux’s famous Breton shirts is knitted on circular looms in its Quimper factory before being dyed, washed and sent to the cutting workshop, where each shirt is cut by hand to ensure the stripes match the side seams (“There’s still no programme on a machine able to do this,” says Petrucci). The yarns are also twisted in opposing directions, which gives the fabric its stability and ensures that any Armor-lux top, “striped or plain, will stay straight and not twist around the body”.

Much as it is known for its Marinière (from €65), Armor-lux’s other signature styles include the pea coat (from €329) – another naval staple featuring two rows of buttons that allow it to be fastened according to the direction of the wind – and the fisherman’s smock (from €69), a simple, boxy canvas top that was traditionally sewn from used sails. “In Brittany in the summer, you will see all the older guys and all the women wearing this while working in the garden,” says Petrucci. And its blue-and-white striped boxer shorts became an accidental bestseller after the New York DJ and nightlife impresario Paul Sevigny revealed he would stockpile them on his visits to Paris – sometimes bringing back as many as 30 pairs. “We were suddenly flooded with calls and emails from customers in the US asking where they could buy them.”

Alongside the central Quimper store, which stocks the full gamut of Breton shirts, the factory shop, just outside of the town centre and recognisable from its blue-and-white striped exterior, is a celebration of Breton culture in all its forms. Here, as well as the brand’s own pieces, which can be personalised, customers will find local delicacies such as tinned sardines and salted butter caramel, Breton literature and music and paintings by local artists. During summer, the factory opens its doors to the public, who can book tours to see how the tops are made.

HTSIThe Escape issue
How To Spend It in... Brittany 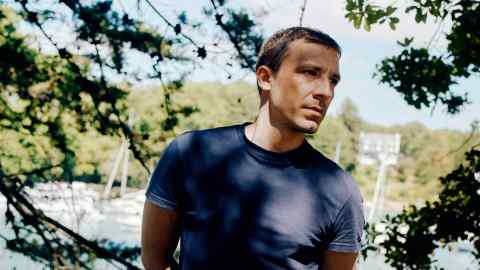 True to its heritage as a workwear brand, Armor-lux still produces uniforms too – it is the official outfitter of the French postal service and the SNCF railway staff. But there’s one constant, even if the design adapts and changes. “We’ll always have our striped shirts,” says Petrucci. “We’ve been making them for more than 80 years now and it’s still a must-have for every wardrobe. The striped shirt will never go out of fashion.”