Soldiers and weapons of the consultancy business are evolving

Consultants first popularised the expression “war for talent” in the late 1990s. Nearly 20 years on, the martial vocabulary persists — and consultancies themselves are in the front line.

The soldiers — and the weapons — are changing, though. While the essential model of management consulting may not have altered much, consultancies are looking for different types of people, and the differences provide interesting clues as to how the business is evolving.

A naked appeal to the ambitious analytical graduate or MBA student still sits at the core of how consultancies attract people. But these days, such overtures are often dressed in the alluring garb of the technology companies and digital agencies with which consultancies compete for recruits. Consulting groups further embellish their approaches with millennial-friendly claims about the wider social purpose of advisory work that would probably have made most 1990s recruits laugh.

Consultancy heads are acutely aware that while they can still attract the cream of top universities and business schools, if they cannot field a team of sufficient breadth, depth of knowledge and diversity of background for their clients, they may not get the business. “Saying ‘I’m smart and I went to Oxford’ — that doesn’t cut it any more,” says Bob Bechek, worldwide managing director of Bain. What is more, he adds, consultants have to be more than the caricature “group of brilliant assholes” who once sought to dazzle clients.

As well as the people with top degrees, international backgrounds and incisive analytical skills they always want to hire, consultancies now give added emphasis to qualities such as teamwork, collaboration and empathy. “In the digital age, you need people with broader and softer skills,” says Johan Aurik, managing partner of AT Kearney.

He identifies a paradoxical challenge for 21st century consultants: even as clients’ demand for detailed, technically grounded advice on everything from cognitive computing to cyber security increases, so does the need for people who can present such advice in convincing and accessible ways.

Imagine, for example, a personable, multilingual graduate of China’s Tsinghua University with a PhD in data science from MIT and a sideline in computer game design and fine art. She sounds like precisely the kind of “left brain, right brain” candidate consultancies are chasing. But here is the second challenge: everyone else is chasing candidates like her too. She could pick a berth at any of the best-known technology companies, as well as other professional groups — from law to advertising — that increasingly overlap with and blur into the work of management consultancies.

Fiona Czerniawska, director of Source Global Research, which analyses trends in the industry, says: “The underlying attractiveness [of consulting] is still there, but the immediate temptation of technology has dented [consultants’] ability to attract people.”

Where consultancy bosses describe a refined duel for the best minds in the world, she depicts pitiless trench warfare. Attrition — the rate at which staff leave — is fairly steady at around 15 per cent, Ms Czerniawska says, but the market is growing at 7 per cent annually worldwide, meaning ever more recruits have to be found. The biggest groups are pitching indiscriminately for anyone they can find, she claims: “If you were a manufacturing company and you were running out of iron ore, you would have to [look] to produce a different raw material so I’m surprised they haven’t innovated more.”

Consultants dispute this analysis. Many say they are making successful efforts to fish from a wider pool and to appeal to those who have left in an effort to convince them to return. PA Consulting, KPMG, PwC and IBM supported UK research carried out this year by She’s Back, an advisory group, and the Management Consultancies Association, looking into why women leave the industry and how to attract them back.

Frank Mattern, global head of recruiting at McKinsey (whose consultants came up with the “war for talent” metaphor), says the group is hiring more people who have had six or seven years of in-depth industry experience, or deep technical knowledge: “People with more technical degrees: that’s something we can’t build in everybody, or it takes too long, or it doesn’t get to the same level of depth.” These more experienced consultants now form up to a third of McKinsey’s intake of recruits.

Rebecca Emerson, UK head of Oliver Wyman, is cherry-picking highly experienced senior staff who may never have worked in consulting, such as Sir Hector Sants, former head of the UK financial regulator, who joined in 2015. “If you have been through industry you see much more what it’s like to own a difficult problem,” she says.

Deloitte, meanwhile, is probing the other end of the pipeline. In the UK, its BrightStart scheme aims to identify the sparkiest school leavers. McKinsey says it tries to find the best and brightest upcoming stars in frontier markets such as Nigeria or Vietnam.

At the same time, consultancies are styling themselves in ways that suggest they are as sexy as the technology groups and start-ups that many younger candidates favour. You are nobody in professional services in the early 21st century if you do not have some form of “lab” or digital unit, structured in less conventional ways than traditional firms and offering the opportunity to innovate and experiment. 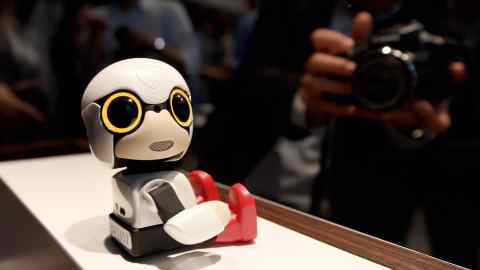 Norman Lonergan, who leads EY’s global advisory practice, says it requires a “heavy investment” just to bring new recruits to the door — an investment that he believes is paying off in rankings that show EY is the world’s “most attractive employer” after Google and Apple. In an “if you can’t beat them, join them” move, rivals PwC and Deloitte have actually formed alliances with, respectively, Google and Apple.

Yet the principal attraction of consulting remains the same as it ever was. Ambitious staff get to “do a variety of things, for various clients: from strategy to advisory and design, to implementation”, says Richard Houston, managing partner of consulting at Deloitte UK.

Eventually, the tools produced by technology companies are bound to revolutionise consulting itself. Consultants say they are using machine learning, for example, to supplement rather than substitute for staff. In due course, though, the advance of artificial intelligence, in areas such as systems implementation and repeatable research, could diminish the need for consultancies to hire at current rates.

No wonder, then, that younger potential employees are choosy. They need to select the employer that best arms them for a future war for talent that could pit them not against each other but against serried ranks of machines.