‘Now, more than ever, people want to be looked after’

Hospitality veterans Alex and Olga Polizzi on embarking on their first joint venture, The Star, a new country hotel

At the start of the year, as schools closed and life in England once again screeched to a dramatic halt, Alex Polizzi, 49, found herself doing something she hadn’t done in decades – moving in with her mother. “We haven’t lived together since I was 20,” says the hotelier and television host of decamping from London with her two children to the home of Olga Polizzi and her husband, the writer William Shawcross, in Friston, East Sussex. The move proved pivotal. As the world of hospitality navigated a bewildering roller-coaster ride between periods of shuttered doors and full-scale openings, the Polizzis used the enforced downtime to embark on their first official joint hotel venture – The Star.

The pair secured a site back in November 2019. A convenient half-hour hop from the family home, the 30-room 16th-century inn sits on the edge of the Cuckmere River in the bucolic South Downs village of Alfriston. Steeped in history, the site once served as a stopover for monks and pilgrims en route to Chichester Cathedral, and with its atmospheric low‑beamed bar and intelligently stocked library, it promises to be a cocooning bolthole from which to explore the county’s increasingly fashionable bounties of Bloomsbury culture, antiques and ravishing scenery.

“We’ve literally never spent so much time together,” laughs Alex, of what has turned out to be an all-consuming project. The Star, nonetheless, has been an opportunity to bring their uncomplicated shared vision of laid-back-but-lovely hotels to life. “We’ve all been through this phase of going to the types of places where you just pick up a card and let yourself into your room,” says Olga. “But now, more than ever, I think people really want to be looked after – and we really want to look after people.”

Polizzi is well-placed to reinstate traditional values at the hotel – hospitality, of the wonderfully old-school variety, is in the blood. The daughter of the influential hotelier Charles Forte (who inadvertently kick-started the family empire in 1934 when opening the first-of-its‑kind dining-based milk bar in London’s Upper Regent Street), Polizzi has been the design director of Rocco Forte Hotels for 25 years – the group set up with her brother, Sir Rocco, which includes Brown’s Hotel in London.

Neither of us are ‘yes’ people. We both argue our corners pretty darn hard”

The global pandemic has done little to dampen her productivity: she is currently overseeing interiors for Rocco Forte projects from Shanghai to Sicily – largely, and much to her irritation, over Zoom. “It takes the joy out of it,” she says. But it’s The Star, the third offering from her own small clutch of English country hotels, The Polizzi Collection (which includes Tresanton, a former yacht club in the Cornish village of St Mawes, and Hotel Endsleigh, a Regency hunting and fishing lodge in Devon’s Tamar Valley), that has been commanding her attention.

This joint project has been both exhilarating and exhausting, given that the intimacy of their relationship dissolved the usual divisions between the personal and professional. “At home all we talk about is work,” admits Alex. “The children get incredibly bored by it.” Even without the significant issues posed by Covid-19, from labour problems to shortages of material (including Italian marble), the project has spiralled into a mammoth task.“The building was in a much worse state than we first thought. We’ve discovered as we’ve gone on that generations of owners have fudged it,” says Olga.

Fudging it is not the Polizzi way. Every roof tile and plastic window has been replaced, and the inner workings of the building painstakingly restored. It’s meant too that the pair have been very much going it alone, working without a project manager or the usual support team. “Normally, when Mum asks me to do something, I desperately try to ask someone else,” says Alex. “But there isn’t anyone. We’ve just got on with it.”

In many ways the pandemic has also helped to draw them into the community. Aside from the Italian bedlinens, almost all the sourcing for the interior has been done close to home, and they’ve called on Alfriston’s talented coterie of blacksmiths, upholsterers and specialist artisans to infuse the space with Olga’s trademark refined and understated decorative flair. She likes to use a patterned wallpaper as a focal point, and layer rooms with decorative accessories such as cushions in contrasting prints, but will often temper these stronger statements with a simple window treatment and large-scale furniture – most importantly a comfortable Glencraft bed.

As part of this process, every decision, right down to the scale of the napkins, has been discussed, dissected and shared. “Neither of us are ‘yes’ people,” explains Alex. “We both argue our corners pretty darn hard.” But when their views inevitably diverge, after a dramatic exit or a brief sulk, things quickly get back to normal and the pair balance each other out rather well. “Often when one is down, the other is up and we end up lifting one another’s mood,” Olga says. The ebb and flow of their energy is similarly contrasting. “I’m a lark and Mother is an owl,” says Alex. “So by the time I’m ready for my first glass of wine, she gets her second wind.” On tricky days, they let off steam by laughing along to old episodes of Fawlty Towers.

In truth, The Star nearly didn’t happen. While scouring locations in the West Country, Olga heard about the vacant site right on Alfriston’s medieval high street but was hesitant, even after viewing it several times with her husband. “It was relatively inexpensive and I absolutely love the area – it’s so great for walks and close to Glyndebourne – but I couldn’t quite see a way to make it work,” she explains. It was the carpe diem spirit of her daughter who saw The Star as a chance to collaborate, and propelled the project on. “I’d always wanted to work with Mum and this was my opportunity,” she says. “You talked me into it,” agrees Olga. “I certainly wouldn’t have done it on my own.” 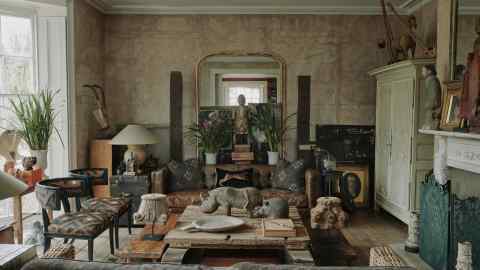 It took the imagination of another member of the clan – Polizzi’s stepson, the artist and sculptor Conrad Shawcross – to conquer the aesthetic hurdles of the property. While The Star’s ancient beamed façade exudes all the character you’d expect of a village frequently voted England’s prettiest, the rest of the building was an odd assortment of add-ons. The sculptor’s solution has been to cleave away at the site much as one would a block of stone, by demolishing the hideous ’60s office block at the centre of the layout to make way for an interior courtyard. “We’ve tried to bring back the beauty of the place by getting rid of the ugly bits and creating something pretty at the heart of the hotel,” says Olga. As an avid horticulturist, she also drew on the experience of garden designer and historian George Carter, who also advised on the transformation of the formal 17th-century grounds of her own nearby home. “He’s given me lots of ideas,” she says. “Now I just have to get on with it.” So far, 26 Portuguese laurels and a sweep of beech trees have been installed.

Although both mother and daughter have strong views on food – bringing in chef Tim Kensett from Scotland’s The Fife Arms – the hotel’s culinary offer will be overseen by Alex. Olga, who has very fixed ideas on the specifics of bed-making, will take charge of housekeeping. Once the hotel opens to guests in June, Alex will be front-of-house, while Olga will oversee operations from behind-the-scenes, while maintaining her role at Rocco Forte hotels.

Despite the hotel business being written into their DNA, there’s a certain resistance to its allure as a profession. “My father used to say that you’d have to be dropped on your head at birth to work in hotels,” says Olga, who joined the design department of her father’s former company Forte Hotels straight after art school some 40 years ago. And yet, the cycle continues. “I wasn’t actually encouraged to go into the industry,” says Alex. “But now my daughter, Olga, is threatening to join the business, and I’m trying to dissuade her. So many of us must have been dropped on our heads!”