How To Spend It Shopping and gifts

Step inside a haven for connoisseurs of Cuba’s finest

It is amazing how much difference a single letter can make: take Tomtom Cigars. Substitute a lower-case for an upper-case T and you move from the world of geolocation and satellite navigation to something altogether much more interesting: a chic, sleek, speakeasy-style cigar shop and coffee micro-emporium in the heart of Belgravia.

It opened in 1997, following a trip founder Tom Assheton took to Cuba, where he became inspired to recreate the ambience of Havana’s famous Partagas factory store back in London. He gave up his job as a rural surveyor to open a small shop on Elizabeth Street.

The shop’s arrival tapped into the great cigar boom of the 1990s. It might amaze younger readers to learn that back in the days of “Cool Britannia”, cigar smoking was not just tolerated but, mirabile dictu, actively encouraged. There were even restaurants in which the humidor (a humidity-controlled cigar box) would be brought to the table with flourish and fanfare, much in the way that a clinking trolley of postprandial beverages might be wheeled tableside.

Now, with a new owner (who prefers to remain anonymous) and a fresh refurbishment led by Jorge Khawam of Mayfair design practice OWN, Tomtom is bringing some of the original ’90s cigar-spirit into the 21st century. “We wanted not only to create a beautiful space, but also to show our gratitude to all our loyal customers who have been with us since the beginning,” says Nigora Djakhangirova, who has run Tomtom’s operations for the past 11 years. “We make sure comfort is key.” As inspiration, the owner presented Khawam with a pair of tobacco-coloured Berluti armchairs. It’s these that set the club-like tone. “Most of our customers are regulars who live or work in the area,” adds Djakhangirova. “They consider our shop an extension of their homes. Some would come on a daily basis, up to three times a day, to grab their favourite smokes.”

A glass door at the back of the shop leads through to the Italian-built walk-in humidor, where the cigars are aged at a controlled 21 degrees celsius and 70 per cent humidity. The cedar-wood units stock bestsellers such as Romeo y Julieta’s Wide Churchill (£29 for a single stick) and Cohiba’s Siglo IV (£36 for a single stick). “Cohiba was once top-secret, available only for Fidel Castro himself,” notes Djakhangirova. Rare limited-edition sticks include Habanos SA’s recent Romeo y Julieta cigar, which was released to celebrate the 2020 Chinese New Year (£912 for a box of eight). The main shop features a curation of smoking accessories including porcelain ashtrays made for Elie Bleu by one of the oldest porcelain factories in Limoges, designed to look like traditional Cuban cigar boxes (£330); slick brushed-chrome ST Dupont lighters (£160); and a vintage glass and sterling silver match striker (£505).

Through a discreet door at the back of the humidor and down a flight of stairs, customers will find a sampling room: all dark wood and marble, glowing fireplace, coffered ceiling and the sort of ventilation system that allows you to sample an entire box of cigars without any of the fragrance lingering on your clothes. It’s here that Tomtom hosts cigar soirées, and one of London’s only women-only cigar evenings. 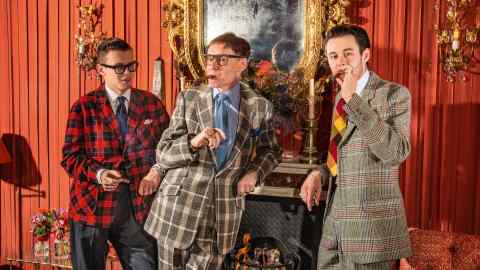 With the smoke filtered before being expelled, I cannot tell you to follow the fragrant blue fumes that linger in the air towards the shop. But I am sure that you could use your homonymous satnav to get you there.