Greener development? It’s in the pipeline for China

Bamboo could cut the environmental cost of infrastructure projects

For Ye Ling, the 110m tonnes of bamboo that goes to waste in China each year represents a huge opportunity.

Bamboo-based replacements have in recent years received recognition from the Chinese government as it searches for ways to reduce the environmental costs of construction and infrastructure projects, which account for a high portion of the county’s carbon emissions.

China is by far the largest producer and processor of bamboo globally, but the market remains niche. The sector’s total value is estimated at just shy of $40bn, according to the China Bamboo Industry Association. China exports about $2.2bn of bamboo products per year, mostly to the EU.

Mr Ye is hoping there will soon be a breakthrough for the industry. In the mid-2000s, he developed a process for making products by winding bamboo strips together and founded his company, which has so far mostly sold piping to meet China’s growing demand for irrigation, drainage and sewerage systems. 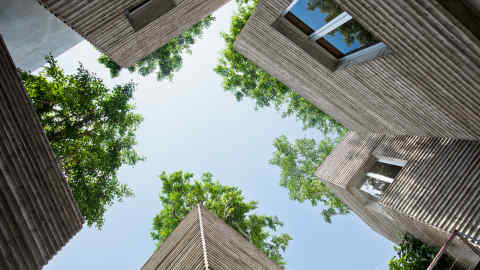 Xinzhou Bamboo is now looking to branch out. It has six production facilities that can each make 20,000 tonnes of bamboo products per year and is developing new products for railway carriages, storage tanks and even houses.

“We now have the technology. We just need the products and we should see explosive growth,” Mr Ye says.

In recent years, his work has received growing official recognition by the Chinese government, with China’s Forestry Bureau in 2017 establishing an “engineering research centre for bamboo winding composites”.

Bamboo is a grass, rather than a tree, with a correspondingly shorter life cycle: it is ready to harvest about every three years and dies after seven or eight years. It takes about 25 years before a pine tree is ready to be harvested.

Every year, China produces 150m tonnes of bamboo suitable for use in making composite products, but only 40m tonnes of that is currently used.

“Replacing traditional materials with bamboo could be an important way to ‘green’ emissions-intensive infrastructure initiatives,” says Charlotte King of the International Bamboo and Rattan Organisation, or Inbar.

A study conducted by Inbar in 2015 found that the lifetime carbon footprints of various bamboo-based building materials were a net negative of 100-600 kg of carbon dioxide per cubic metre, compared with net positives of more than 30,000kg for aluminium and around 15,000kg for steel.

The use of synthetic glues, laminates and non-biodegradable resin in some materials means that not all bamboo-based products are fully suited to the circular economy; the products will need to be burnt for energy production after use, rather than the ideal scenario of being repurposed or recycled. But the development of non-toxic and biologically based replacements could later improve the sustainability further, Ms King says.

In Europe, similar attempts to use wood and other biomaterials to replace traditional products have faced some criticism over the additional land that would be necessary to meet demand.

In China, however, a policy during the 1980s-90s of supporting farmers with subsidies to encourage the use of bamboo for reforestation on barren land — known as the “green for grain” policy — made planting bamboo an attractive way for less well-off rural farmers to raise their income.

The growth in the use of biomaterials as a replacement for traditional products made by more polluting industries is an offshoot of the country’s evolving understanding of how to build a green and circular economy.

China’s central role in the global waste industry was a driver for its relatively early and enthusiastic adoption of the circular economy concept in 2009, when a law to promote it was passed.

In recent years, policy has evolved towards “greening” the economy and building an “ecological civilisation” — the latest buzzword for sustainable growth.

Life & Arts
Why more designers are using bamboo in interiors 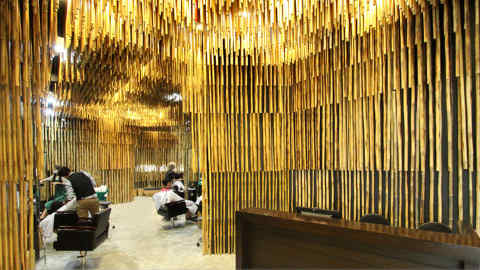 As part of this shift, President Xi Jinping has made fighting the country’s toxic air pollution a core policy goal and has emphasised the need to move away from a growth-at-all-costs strategy towards a more balanced approach to development.

The use of bamboo-based products in infrastructure development is considered a promising option by environmental activists in China because it gets right to the heart of China’s pollution problem: the industrial pollution that comes as a side effect of the country’s huge appetite for more infrastructure.

Striking a balance between sustainability and expanding the economy has become more complicated for Chinese policymakers in recent months as gross domestic product growth has sunk to record lows.

The downward pressure has threatened efforts to promote environmental initiatives such as a switch to renewable energy, and raised the prospect of more unnecessary “white elephant” infrastructure projects, usually built with polluting traditional materials sourced locally in order to maximise support for the regional economy.