A small group of hedge funds are profiting from turmoil in the digital asset market that has already wiped trillions of dollars off the total value of cryptocurrencies.

Some computer-driven funds — which use algorithms to try to predict and trade price moves in crypto and other markets — have picked up winnings from rapid declines in assets such as bitcoin and luna, even as many other investors are suffering huge losses.

The investors capitalising on such bets include former Lehman Brothers and Morgan Stanley trader Jay Janer, who is the founding partner of KPTL Arbitrage Management in the Cayman Islands.

His Appia fund, which wagers on rising and falling crypto futures prices as part of its strategy, profited from the $40bn collapse of the cryptocurrency luna last month. The vehicle quickly placed short positions — bets on falling prices — to take advantage of the crypto token’s rapid decline. Luna crashed from more than $80 to close to zero in a matter of days.

“We’ve made good money from luna,” Janer said. “The model followed what was happening in the market. It started crashing and the model got in.”

Janer estimates his fund caught around two-thirds of the fall in luna’s price. It had also been betting against bitcoin, the largest cryptocurrency, and fellow token ether, before switching its short bets to smaller coins.

His fund is up around 20 per cent this year, while hedge funds on average have lost 2.9 per cent in the first five months of this year, according to data group HFR. London-based wealth manager Atitlan Asset Management also profited after its algorithms, which look for tradable market patterns, took a small short position in luna futures.

For many crypto investors, this year has been extremely painful. Bitcoin has lost 70 per cent of its value since its all-time high last November and the total market capitalisation of cryptocurrencies has dropped from around $3.2tn to less than $1tn in that time.

Singapore-based Three Arrows Capital is among the high-profile hedge funds to have suffered from such declines — failing to meet margin calls earlier this month after its digital currency bets turned sour.

But the price falls have provided a lucrative trading opportunity for many quantitative hedge funds, which are agnostic about whether prices rise or fall, as long as there is a clear trend in one direction to trade.

Many large quant hedge fund firms have been diversifying into more niche markets such as crypto futures in recent years as they try to avoid crowded positioning in traditional markets and improve returns.

Leda Braga’s Systematica Investments is among those to have made money from the sell-off in bitcoin and ether, according to a person familiar with its positions. Its $6.7bn Alternative Markets fund is up 15.9 per cent this year. Systematica declined to comment. 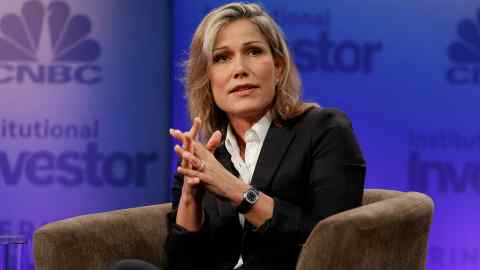 “Our short crypto positions have been strong markets for us recently,” said Greenig, whose fund is up around 15 per cent this year. “There has been a very clear downtrend for months”.