When Steve Stephens posted a Facebook video of himself shooting a random stranger last Sunday, he did more than commit a horrific crime. The Cleveland killer also highlighted the abject failure of big technology groups to take responsibility for their role in spreading illegal, hateful and false content around the world.

Google, Facebook, Twitter and the like have long benefited from the principle, established in a 1996 law, that internet content providers are not responsible for user postings. At the time, the law made sense. Telephone companies were not liable for threats made using their services, so why should a broadband provider or blog hosting site be held responsible when some nut posted a terrorist rant? Not surprisingly, many countries and the EU have similar immunity rules.

But the growing power of social media and search companies raises questions about whether this legal framework still makes sense. The big tech groups do more than just host third-party content. Their algorithms actively promote some posts and disfavour others. They serve up advertising on other websites, and they take down some offensive postings after users complain (the Cleveland murder video was up for two hours).

To my mind, these companies are no longer mere conduits. They should have to take at least partial responsibility for the content that appears on their sites and alongside their adverts. The tough question is how far to go.

Clearly, YouTube, Facebook and others should be moving faster to find and remove offensive content, but should they also be required to avoid promoting such material in the first place?

The law could go further and force them to create mechanisms for quick handling of complaints when the content is merely offensive, invasive of privacy or false. 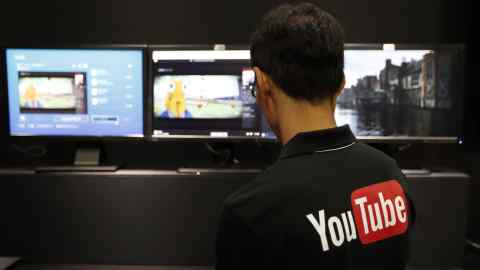 It is also possible to penalise the posters. Officials in the Indian community of Varanasi recently said that administrators of Facebook and WhatsApp groups would be prosecuted for circulating fake news. If something false is posted, the group must deny it and remove the member, or the administrator will be held responsible. But, to my mind, that would let companies off the hook too easily.

Yet companies boast daily about advances in artificial intelligence. It is hard to believe that they could not improve screening.

The problem will only get worse. Facebook said this week that it is working on reading users thoughts. Before they inflict the results on the rest of us, the company needs to think harder about its responsibilities, not just as a pipeline but as a publisher. Experience teaches us that some ideas are better kept private.