UK economic output rises 1.8% in May after historic April plunge

‘Disappointing’ rebound in GDP was much weaker than the 5.5 per cent forecast by economists

Sign up to myFT Daily Digest to be the first to know about UK business & economy news.

The UK economy posted a “disappointing” 1.8 per cent increase in output in May after April’s historic plunge, suggesting the recovery will take longer than expected.

Gross domestic product rose 1.8 per cent in May compared to the previous month, according to data from the Office for National Statistics. This was well below the 5.5 per cent forecast by economists polled by Reuters.

The monthly increase in GDP was small compared with the 20.3 per cent plunge registered in April. As a result, in May the UK economy was still 24.5 per cent smaller than in February, pointing to a long recovery to pre-crisis levels.

Sterling fell and UK government bonds rose in price in response to the weaker-than-expected GDP data. The pound was down 0.3 per cent against the US dollar, while the 10-year gilt yield fell 0.027 percentage points to 0.156 per cent.

May’s GDP figure “is a disappointing first step on the road to recovery and suggests that hopes of a rapid rebound from the lockdown are wide off the mark,” said Thomas Pugh, UK economist at consultancy Capital Economics. “Indeed, the path to full economic recovery will probably be much longer than most people anticipate.”

James Smith, research director of the Resolution Foundation, a think-tank, said “the UK economy is unlikely to return to close to its pre-Covid economic path until a vaccine or treatment is found”.

The increase in May was supported by an 8.2 per cent monthly expansion in the construction sector, reflecting the easing of restrictions for the sector on May 11. Manufacturing output grew 8.4 per cent as workers were encouraged to return to work on the same day.

Despite the monthly increases, construction output was still 39 per cent below February’s level, while manufacturing production was 22 per cent smaller.

While some shops reopened in May, output in the services sector, which accounts for 80 per cent of the UK economy, grew only 0.9 per cent. This was well below analysts’ expectations of a 4.9 per cent increase and the sector was 24.4 per cent smaller than in February.

In the three months to May, which cover the period of the tightest restrictions, the economy shrank 19.1 per cent compared to the previous three months, by far the steepest contraction since monthly records began in 1997.

The data suggest that for the second quarter of 2020 the economy is on track to register the largest contraction since quarterly records began in the 1950s, despite improvements expected for June when a large part of the services sector reopened.

“Today’s figures underline the scale of the challenge we face. I know people are worried about the security of their jobs and incomes,” chancellor Rishi Sunak said. “That’s why I set out our plan for jobs last week, following the PM’s new deal for Britain, to protect, support and create jobs as we safely reopen our economy.”

Last week, the government responded to the economic emergency by announcing further support for jobs and the hardest-hit sectors, such as hospitality, in order to prevent a surge in unemployment and business failures.

An earlier easing of restrictions in Europe supported UK exporters, with exports excluding precious metals rising 0.4 per cent in May compared with the previous month. Imports, meanwhile, fell 1.7 per cent after shrinking by a quarter in April.

No other major European economies produce monthly GDP figures but May’s sector data show that the UK experienced a weaker rebound in retail sales than the eurozone, while it registered a similar hit to industrial output. 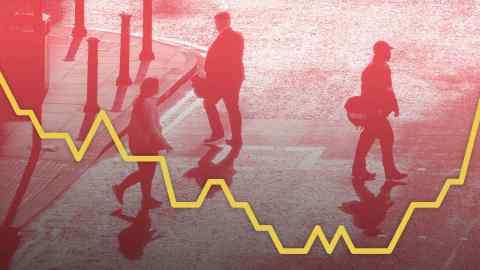 Last month, the OECD, the Paris-based organisation, predicted that the UK recession would be the worst of any major economy.

“With risks to the outlook tilted to the downside, it remains crucial that policymakers at the Bank of England and in government remain aggressive in their efforts to stimulate demand and return the economy to closer to its potential as quickly as possible,” said Kallum Pickering, senior economist at investment bank Berenberg.

Monthly GDP data is published with a delay of several weeks from the reference period, prompting policymakers and investors to look at alternative indicators for a more timely assessment of the most recent trends. The Financial Times on Tuesday launched a tracker of some of the more up-to-date statistics: these point to an incomplete recovery after the broader reopening of the hospitality sector in June.