Vladimir Putin hailed a fresh start in the badly battered US-Russia relationship, after a first meeting with Donald Trump at the G20 summit, which he said had set the scene for a new era of closer co-operation between Moscow and Washington.

Mr Putin praised the US president, saying the “real Trump is completely different from the TV Trump” and describing him as “sane” and “concrete” in his responses.

“If we can build a relationship along the lines of our conversation yesterday, then there is every reason to believe we can restore, at least to a certain degree, the level of co-operation we need,” he told reporters after the conclusion of the summit.

US-Russia relations plumbed new lows under Barack Obama, amid US anger over Russia’s annexation of Crimea and its support for Russian-speaking separatists in eastern Ukraine, as well as its armed intervention to bolster Bashar al-Assad in Syria.

But they deteriorated even further after US intelligence concluded that the Kremlin was behind last year’s cyber attacks on the Democratic National Committee and Hillary Clinton’s campaign.

Mr Trump, who repeatedly praised Mr Putin while a candidate, has expressed the desire to repair relations with Moscow. But that proved hard after the allegations of Russia’s election meddling first emerged, and the FBI began investigating connections between his campaign aides and the Kremlin.

Experts say that at a time of growing anti-Russian sentiment in Washington any gesture by Mr Trump towards Russia might antagonise US lawmakers, including many within his own party. Indeed the US president appeared to harden his rhetoric on Russia this week, urging Moscow in a speech in Warsaw on Thursday to halt its “destabilising activities” in Ukraine and cease support “for hostile regimes, including Syria and Iran”.

However, on the issue of alleged Russian cyber-hacking, Mr Trump and Mr Putin appeared to find common ground, at least according to the Russian president. He said that Mr Trump had accepted his assurances that Russia did not interfere in the US election. “He noted [what I said] and he agreed with it, although you’ll have to ask him yourself what he actually thought,” Mr Putin said. “It seemed to me that my answer satisfied him.”

Rex Tillerson, the US secretary of state, gave a somewhat different account of the conversation. Speaking to reporters on Friday he described a “very robust and lengthy exchange on the subject” of Russia’s alleged meddling.

He said the two leaders had agreed that the issue was “a substantial hindrance in the ability of us to move the Russian-US relationship forward”, but that while Mr Trump had raised serious questions about Russia’s actions, he was “rightly focused on how do we move forward from what may be simply an intractable disagreement”.

In a statement released after the meeting, Chuck Schumer, the top Democrat in the Senate, said: “For Secretary Tillerson to say that [Russia’s interference] will remain unresolved is disgraceful — to give equal credence to the findings of the American intelligence community and the assertion by Mr Putin is a grave dereliction of duty and will only encourage Russia to further interfere in our elections in the future.”

At the meeting, which was supposed to last about 30 minutes but ended up stretching to more than two hours, the two men took in the crises in Syria, North Korea and Ukraine, with officials praising a revival of Russia-US co-operation on all fronts. Mr Tillerson announced after the encounter that the two men had agreed to implement a ceasefire in south-western Syria.

Mr Putin said that the US position on Syria had become “more pragmatic”. “They understand that if we unite our efforts, we can achieve a lot,” he said. He described the ceasefire deal as a “breakthrough”, and a “huge step forward”. 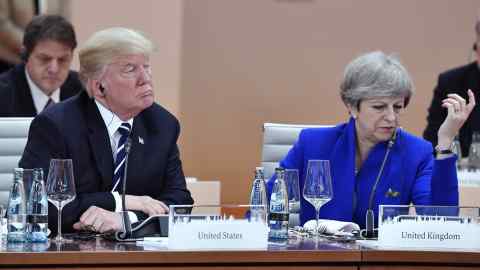 Some analysts have warned against reading too much into the Putin-Trump encounter. Heather Conley, a Russia expert at the Center for International and Strategic Studies in Washington, said the history of US-Russia relations was littered with similar examples of the first meetings between leaders of the two powers.

“Beware that every American president for the past twenty-five years has had a positive first meeting with a Russian president,” said Ms Conley. “This fits a similar pattern although the severity of the issues these two leaders addressed are more significant than any post-Cold War US president has had to address.”

Mr Tillerson said one positive aspect of the meeting was “there was not a lot of re-litigating of the past” because the leaders felt it was important for the two powers to find a way to work constructively together.

“Both of the leaders feel that there is a lot of things in the past that both of us are unhappy with,” said Mr Tillerson. “The perspective of both of them was that this is a very important relationship, the two largest nuclear powers in the world . . . How do we start making this work?”