Art of the experimental: young Chinese jewellery designers to watch

Jewellery designers such as Cindy Chao, Wallace Chan and Michelle Ong, with their artistry and depictions of nature, have become the pride of Asia, establishing a loyal following in China and the west. But hard on their heels is a new wave of young Chinese designers, notably Feng. J, Austy Lee and Gearry Suen, who are creating a stir in jewellery circles with their mix of innovative techniques, dynamic sense of colour, and traditional craftsmanship.

The highest profile of these young talents is enjoyed by Shanghai-based Feng. J, mainland China’s first homegrown jewellery artist and the first to appear on an international auction platform. In November, her necklace of pastel-hued gemstones inspired by Monet’s garden at Giverny and set with a large pink diamond sold for $2.6m at Phillips in Hong Kong to a European collector.

Feng’s stock rose further when she was selected as one of the female jewellery designers for Phillips’ Vivarium selling event, Woman to Woman, curated by Vivienne Becker.

The high jewellery market has long been dominated by western brands, “but now the world is flat and the information flowing via the internet makes it easier to know what is happening on the other half of the world”, says Feng. “Asian jewellers are getting more chances to be seen”.

This has certainly been the experience in Hong Kong for Austy Lee. The city is a well-established hub of international jewellery design and production, as well as luxury consumer spending. “There is a lot of competition, with a lot of people developing their own brand and style, in an east-meets-west culture,” says Lee, “and everyone has strong ideas.”

The city is his biggest market, although he also sells in the UK through Annoushka Ducas. Lee is the former chief designer of another Chinese leading light in jewellery, Wendy Yue, and set up his own brand in 2017 with a statement-making theme: “When Jewellery is Psychedelic Art”. It set the scene for hypnotically coloured, beautifully detailed and crafted pieces inspired by eastern religions, New Age philosophy, Art Deco and fashion. The Asian aesthetic tends to be feminine and floral, but Lee describes his designs as “a bit more masculine and bolder with many forms and angles”.

Another young Chinese designer making a name for himself is the prodigiously talented Gearry Suen, the Harbin-born, London-based 25-year-old who graduated from the Royal College of Art last year and who, in a highly competitive field, received three specialist awards and the prestigious Goldsmiths’ Company Award in May for his Conversation earrings.

He will be exhibiting at Goldsmiths’ Fair from September 28. Suen has also been selected to feature in next month’s GemGenève Designer Vivarium exhibition, which puts the spotlight on talented emerging designers.

The pandemic delayed his first official show, planned for Shanghai, where potential clients were eager to see his work. But the restrictions on travel over the past 18 months have actually led to a sales boom for all jewellery in China, as demand shifted to domestic consumption.

What draws these three designers together is their experimental mindset and innovative techniques. Feng is trying out ideas with carbon and aluminium in her new high jewellery collection that was unveiled at Jingart in Beijing in June. However, she is best known for the “floating setting” technique she developed in 2018, two years after launching her label.

It creates a painterly Impressionist-like effect. Within a light framework of gold, electroplated in pastel hues, delicately coloured gemstones overlap to give volume but remain light. Feng says it “solved all my problems: I’ve always wanted my creations to feel weightless and I am fascinated by the way light transmits through my favourite double rose-cut diamonds, so it is a bit like a jigsaw puzzle.”

Feng’s artistic skills were inherited from her great-grandfather, who was a court painter. Austy Lee’s love of gemstones, however, was nurtured by his uncle, a specialist and collector of jade, and by the time he spent as a trainee at jeweller Adler in Hong Kong. Lee often incorporates cabochon or rare carved jade he has found into his designs, or he carves pieces into goldfish or flowers in house. “Even in London and Paris there are customers who like the pieces that have a touch of jade,” he says.

Lee is a prolific designer working closely with clients, sketching imaginative pieces with lots of colour. He combines craftsmanship with technology, mostly 3D animation, which he says “helps transform visions in my head into actual designs”. The gemstones — his favourites are the green-blue hues of emeralds, Paraíba tourmaline and vibrant opals — are set in gold, specially coated in colourful resins to make the gem colours pop. 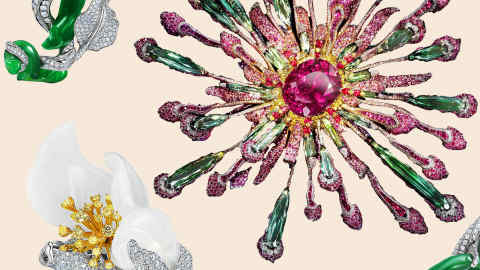 Suen’s Goldsmiths’ Company Award and one of his specialist awards — for technical innovation — were secured for creating high jewellery with complicated structures, using virtual reality programs normally employed in video game design. “Some might find it strange and bold, but I think it’s opened a gate of imagination,” says Suen. “We live in the 21st century, so why not use something of this era?”

While at the RCA he was given access to the VR facilities in the animation department and printed the resulting fantastical designs in resin to test wearability. He then reworked and hand-engraved the pieces before they were cast in gold or titanium.

The designs have a dreamlike quality inspired by Art Nouveau and the work of artist HR Giger, who designed the notorious monster in the Alien sci-fi films. The resulting gem-set designs, which combine technology and tradition, are delicate, surreal sculptures that illustrate how the future can meet the past in high jewellery.