It’s always hot somewhere, so get booked in whether your seaside fantasy is in New Zealand or Norfolk

For years, Oualidia – the small coastal village between Essaouira and Casablanca, long a holiday redoubt for well-heeled Moroccans (including the royal family) – eluded me. When I finally did get there, it hit me like a charm bomb, and not least La Diouana, the lovely villa in which I stayed. The holiday home of James and Czarina von Leyden (who enjoy swimming, paddle boarding and birdwatching on Oualidia’s five-mile-long lagoon), La Diouana perches at the edge of a eucalyptus-lined escarpment that overlooks a broad brown-sand beach and, beyond, the grey-green Atlantic. Once the village’s customs house (it still has its original blue shutters and doors), today it feels every inch a personal, loved home – from the monochrome-tiled kitchen (where the von Leydens’ longtime chef, Fatima, makes a mean kefta tagine) to the Amazigh carpets and old photographs in the bedrooms (three are in the main house, two more in a separate annexe across a courtyard – ideal for teens, probably from their POV as much as parents’). The views from the small pool are a spectacle of land- and skyscape. Best of all, Oualidia’s lagoon is swimmable and its beach eminently safe – usually populated by smiling surfers, families and a few gendarmes guarding the former royal palace (said for years to be in the sights of various luxury hotel concerns, though I really hope that never happens). ladiouana.com, from £2,000 per week for main house, £3,000 for the estate

A Waiheke welcome in New Zealand

It’s coming up to the summer solstice down in the antipodes, and in New Zealand few places manifest the joys of high summer like Waiheke Island in the Hauraki Gulf, some 20km from Auckland’s central business district. Its habitués know how to do its beaches: Oneroa for coffee, ice cream and good eats; Palm Beach for mild surf and socialising; and the over-2km-long white stretch of Onetangi for walking, swimming and horizons to calm the soul. Onetangi Belle, with just three bedrooms, wasn’t quite big enough for the tagalong brood I spent Christmas 2018 with here, but it’s the New Zealand beach house I still daydream about: its contemporary façade slatted in light timber, full of blue-and-white cottons, all the rooms bathed in sunlight from dawn to dusk.

The open kitchen gives on to a covered terrace with views north-east towards green bluffs and the odd vineyard; the master suite, which takes up the entire first floor, puts you half in mind of holing up just as a couple (or even a single). It’s a steep but lovely walk down to the sand (where you can hit the Beach Store for your morning flat white, and Charlie Farley’s for your sunset drinks). coastandcountry.co.nz, from about £480 a night

To the (Norfolk) lighthouse

Norfolk: gorgeous light, dramatic tides, stiff winds to back your sails (but also chill your bones, even sometimes in August). Also, where else can you stay in a lighthouse that is name-checked by Daniel Defoe in Robinson Crusoe? London-based PR powerhouse Julian Vogel has spent the past 10 years restoring his 18th-century architectural treasure in the village of Winterton-on-Sea, and it’s a winner. The extension he added holds an open-plan dining-room/kitchen, with a wood-burning stove and a cedar terrace beyond its French doors.

The lighthouse itself now houses a cosy sitting room and two bedrooms, one with four built-in bunks, the other a master suite (on the first and second floors respectively). But it’s up the near-vertical staircase leading to the glassed-in Lantern Room that the lighthouse earns its keep, with 360-degree views of the North Sea and surrounding countryside (with a third, platform bed cleverly fitted above in the eaves). wintertonlighthouse.com, from £495 a night for a minimum three-night stay

“Goa” and “party” have long been conflated in travellers’ minds. Midnight beach markets and dawn dance parties still abound, but there are still quiet escapes to be made. One of the best can be found straddling two beaches – Coco and Kegdole – on Dolphin Bay, across from the state capital, Panjim. Ahilya by the Sea is actually three houses (as well as an independent suite and a treehouse), not one, which share a verdant plot of garden overlooking the Indian Ocean. They are owned by a descendant of António Xavier Trindade (the late-19th/early-20th-century portrait artist sometimes called “the Rembrandt of the East”) and descendants of the Maharaja of Indore (the property takes its name from Ahilya Fort, the ancestral home in Maheshwar in Madhya Pradesh).

When I stayed a few years ago, I was lucky enough to have the run of the place with a girlfriend; we got to choose our own bedrooms in the Sunrise and Sunset villas, and made liberal use of the beautiful book-filled living room, music room (since converted into a suite) and gardens. The house is filled with family antiques boasting a United Nations of provenances: Bali, Uzbekistan, China, West Africa, Oceania. We spent early mornings curled in a reading nook next to a picture window, piled high with cushions, and evenings with our arms hanging off the edge of the infinity pool (there’s also a lap pool) just above the breaking surf, drinks in hand, admiring the vivid sunsets. The staff have your every comfort worked out in advance, and the food is sublime to boot. ahilyabythesea.com, from 23,000 rupees (about £230) a night, including breakfast and laundry

The south of Sardinia is one of those places I’m both glad I personally discovered a while ago and also slightly reluctant to write about – its beaches and coastlines are lovely (with seas, in some hidden coves and corners, to rival the Maldives, and all but empty even in July), and its culture unspoiled. Su Faru is a modest private estate overlooking a 16th-century watchtower and archaeological site at Nora, a sleepy beach town about an hour’s drive south of Cagliari.

Its five cottages are not large, and not luxurious in any conventional sense; the furnishings are simple, the outdoor spaces generous but elemental, the kitchens sweet and serviceable but not remotely magazine-worthy. What Su Faru offers is unfettered access to a part of the island that feels slightly removed from the present – a place where you can walk out of your bed, off your terrace, straight down into the sea and swim across a mirror-flat turquoise bay to ancient Roman ruins, in (more or less) blessed solitude. norabeachvillas.com, from €235 a night 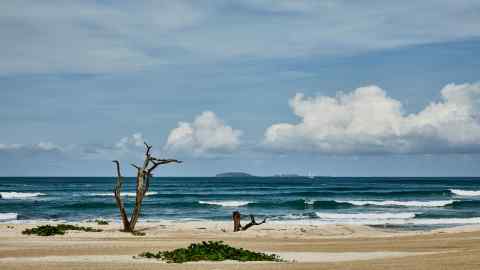