The art world prepares for a muted May

The month of May is usually boom time in the art market as the major auction houses host their biggest-ticket New York sales, following the high-energy Frieze New York fair. Last year’s mega May auctions brought in $1.7bn (with fees) across only five evening sessions. The Covid-19 pandemic means this year’s equivalent sales have been postponed while the Frieze fair has gone online, with wider implications for the rest of the market.

“There isn’t a valid barometer. When you have auctions and art fairs, you have a very clear understanding of what your neighbour, another gallery, or this person is asking for that artwork,” said the dealer Dominique Lévy, co-founder of the Lévy Gorvy gallery, on a webinar last week. When it comes to the value of art, she said, “There’s a readjustment, without a doubt.”

This applies to new works as well as to those destined for auction, Lévy explained. “There’s incredible pain out there . . . Losses of jobs and money, businesses. We are in a postwar moment. So art hopefully can remain a solace, can remain an asset . . . But primary [new to market] works will be less expensive than they were, and if not then we’re being insensitive to the reality,” she said.

In a separate interview with CNN last week, Lévy admitted to a “tremendous” slowdown in her own business, which she said had fallen between 90 and 95 per cent since the crisis struck. A survey of 236 galleries worldwide, conducted by The Art Newspaper and the economist Rachel Pownall in April, revealed an expected average revenue loss of 72 per cent.

Gallery director Boris Vervoordt has taken the working from home mantra to the next level by installing his Frieze New York online Viewing Room show where he lives. It’s not your average home, mind — Vervoordt lives in a set of 16th-century buildings and medieval alleyways in Antwerp called the Vlaeykensgang. His father, Axel Vervoordt, began to renovate the 11 buildings in 1969 and they became the first venue for his eponymous gallery. Now, Boris Vervoordt has installed 10 works by the late Dansaekhwa (Korean minimalism) artist Chung Chang-Sup through the buildings, even though the fair is a virtual one.

Commercial galleries in continental Europe have begun to open their doors again, as lockdowns are tentatively eased. In Germany, businesses with spaces of 800 sq metres or smaller were able to open from April 20 as long as they observe social distancing rules. Esther Schipper reopened her Berlin space on April 23, with a light and sound show by Daniel Steegmann Mangrané.

The gallery has put in place measures such as having staff wear face masks, making hand sanitiser available and keeping attendees to a minimum distance of 1.5 metres apart, Schipper says. She notes that there were “quite a few visitors” at the weekend, adding “I can understand the need to engage with art in these particular times.”

Max Hetzler gallery has also reopened both its spaces in Berlin — with shows of work by Jeremy Demester and Sigmar Polke’s photographs — and has also been relatively busy (while limiting visitor numbers to safe levels). “As of now museums are still closed, so galleries have a bit of a monopoly on visual art,” says Max Edouard Hetzler.

Art Basel has reversed its unwelcome decision to keep 25 per cent of the exhibitor fees from the cancelled Hong Kong edition and is instead rolling these over to future stand fees at its fairs in Hong Kong, Basel or Miami in 2021. The U-turn was “based on an assessment of how the fair can best support its gallery clients in the short term,” Art Basel says, adding that “It is clear that galleries are under increasing pressure.” The fair confirms that it is working closely with the Hong Kong Convention and Exhibition Centre regarding a possible government rebate to event organisers at some venues.

Art Basel’s organisers have also extended the date that galleries have to commit to its postponed Swiss event, from May 1 to June 1, in view of the still uncertain environment. Art Basel is due to open on September 17 but, as the fair directors write in a letter sent to exhibitors last week, “It remains unclear when staging large-scale events — the bedrock of our own business — will be viable again.” Either way, there will now be another Online Viewing Room for its Basel galleries that will run during June, when the fair was originally meant to take place.

Organisers of the cancelled Artmonte-carlo fair, due to run in Monaco’s Grimaldi Forum between April 30 and May 3, have come up with a refreshingly old-school alternative: a PDF catalogue. All 51 of the fair’s participating galleries, including White Cube, Kamel Mennour and 303 Gallery, get to show up to three works each, with the relevant (often personalised) email addresses and telephone numbers to accompany their entries.

The pages are meant to be viewed online and are interspersed with “breaks”. These include a musical interlude that links to Angela Bulloch’s Heavy Metal Herkules, originally organised by the idiosyncratic composer Augustin Maurs at Munich’s Herkulessaal concert venue in 2017.

The catalogue makes a pleasant change from the online viewing room strategy that most fairs now adopt, and not just from a visual perspective. “You don’t have to log in anywhere and your data is not stored, your movements are not tracked,” says fair director Thomas Hug. The catalogue is available at artmontecarlo.ch from April 30. 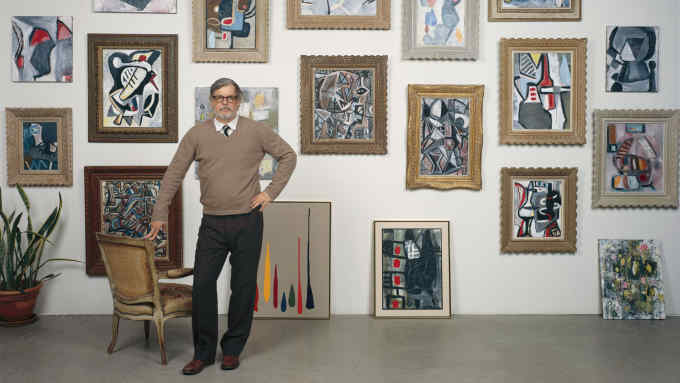