With outages the norm, recent wind projects show progress — but some say more can be done

Lebanon has more than 300 sunny days a year, windswept mountains and a chronic undersupply of power. You might think therefore it would be racing to develop a vibrant solar and wind energy market.

Yet the country of about 4m people lags behind others in the region, such as Egypt and Jordan, which have rushed to exploit their natural advantages with solar projects that dwarf Lebanon’s largest.

“This is a big game changer,” said Pierre El Khoury, general director of the Lebanese Center for Energy Conservation (LCEC), the government’s renewable energy agency. “This is the first time EDL has bought electricity from the private sector in this way.”

Lebanon has struggled with chronic power cuts ever since the 1975-90 civil war, which devastated its infrastructure. Political divisions, bureaucracy, corruption and conflicts such as a 2006 Israeli bombing campaign and the civil war in neighbouring Syria have undermined efforts to fix the grid.

Today, Lebanon’s power gap is estimated at about 1GW. This translates into cuts of at least three hours a day in the capital Beirut and as many as 12 hours daily elsewhere.

While on paper EDL holds a monopoly on power generation, in practice the government has tolerated the thousands of private diesel generators that have sprouted up to fill the gap. Their discontented customers refer to their networks as “generator mafias”.

As well as being costly and polluting, these companies have skewed the market’s economics. Leon Kradjian, managing director of Solarleb, a solar energy company in Beirut, says customers are often hard pushed to make large investments in solar installations given the generator bills they have to pay.

He recalls watching the generator market expand rapidly in the decade since setting up his own business selling solar water heaters in the wake of the 2006 Israeli bombardment, which led to even more frequent power outages. “They’ve made billions — not just millions — billions of dollars,” Mr Kradjian says.

The wind farm deals approved this year, known as power purchase agreements, are meant to be a step towards fostering cleaner, less chaotic private sector contributions to the country’s power supply.

The deals involve three companies: Lebanon Wind Power, Hawa Akkar and Sustainable Akkar. They aim to build wind farms in the northern Akkar region with a combined capacity of 200MW by 2020.

The government is planning to launch a number of similar projects in solar and wind in the coming years, Mr Khoury says. In the next few weeks, LCEC will select 12 bids for solar farms with a combined capacity of 180MW. The aim is to have these, too, built by 2020.

The country also plans to add 400MW of wind farms and 300MW of solar farms with battery storage capacity by 2025, Mr Khoury says. Total investments in renewables are likely to exceed $1.5bn by 2025, with about 80 per cent of that coming from the private sector, he adds.

Such targets mark a big step forward for Lebanon, whose largest solar projects to date have a relatively low output compared with some others in the region. Jordan has hundreds of megawatts in the pipeline. Egypt is building a solar park, the capacity of which could reach 2GW.

Clean energy advocates say Lebanon should be thinking bigger than it is. Some have mooted the idea of a collection of solar farms with a total capacity roughly equal to the country’s 1GW power gap.

“We have much, much bigger potential for renewable energy in Lebanon,” says Ali Ahmad, an energy policy specialist at the American University of Beirut’s Issam Fares Institute.

“If you look at what neighbouring countries are doing with renewables and you look at us, we are far behind.”

Mr Ahmad points to the lack of a regulatory body to co-ordinate and monitor power generation by private companies as a factor holding up energy development.

Lebanon also still faces deep political divisions that have hindered public services from roads to rubbish collection for years. It spent more than two years without a president before its main political blocs were able to agree on Michel Aoun in 2016.

Resolving the power supply gap is vital for the broader economy, says Nassib Ghobril, chief economist at Lebanon’s Byblos Bank. Providing 24-hour electricity would be a boon for businesses and a step towards scaling back electricity subsidies estimated to cost the government about $2bn a year.

“The private sector can and should be involved in the production of electricity in Lebanon,” Mr Ghobril says. “That’s a key part of the solution.”

Get alerts on Lebanon when a new story is published 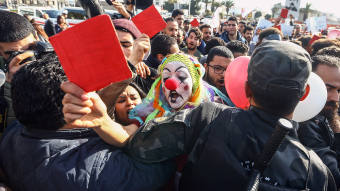