The great data leap: how AI will transform recruitment and HR

The idea that machines will take over all jobs by 2050 is too simplistic: a close look at how artificial intelligence will affect the human resources department — including recruitment and monitoring performance — reveals a complex picture.

The days of reading CVs and covering letters then holding interviews will give way to AI-led candidate assessment. Jobseekers will be sifted by algorithms and face exercises that test everything from problem-solving skills and creativity to how they respond to stress.

Catalyte, an AI employment platform, is an early indication of what could change. Michael Rosenbaum was an adviser in President Bill Clinton’s White House when he came up with the idea for Catalyte. It was the late 1990s and large businesses were sending manufacturing abroad, resulting in job losses in lower-income communities.

At the same time, the internet was creating employment opportunities. Mr Rosenbaum wanted to find people who had a natural ability but lacked the means to train in software development.

If you add wearable devices to measure individual performance, you start to get supercharged capitalism

The company developed a database and algorithm to identify the aptitude of candidates such as Tim Reed, who is now an automation engineer at the organisation. Mr Reed initially thought he had failed after struggling with calculus in the application test. He now knows that such questions are part of a hiring algorithm designed not to count correct answers but to measure tenacity, grit and creativity under pressure.

The tech looks at factors such as whether candidates open multiple browsers or refer back to other questions to solve a problem. “As a software developer, knowing how to figure stuff out is important,” Mr Reed says. “The training teaches you everything you need to know to find the answers for yourself, but you have to be motivated enough to find them and take control over your learning and career.”

Machines will also change the type of jobs humans apply for, though hopes of early retirement for the human race may be unfounded.

“Automation is more likely to radically change what people do in jobs rather than replace work completely,” says Ksenia Zheltoukhova, a director at Nesta, the UK innovation foundation. Strong social skills will be in demand as technology takes over routine technical tasks, according to Nesta research.

“The type of skills employers will be recruiting for will evolve, with greater emphasis on interpersonal and cognitive skills, creativity and problem-solving,” Ms Zheltoukhova says. “HR teams will need to adapt methods to identify and test these skills, which may be hard to find.”

This does not spell the end for lower-skilled jobs in sectors including construction, agriculture and hospitality. Once thought to be vulnerable, they are still an important part of the economy and are likely to be resilient in future. “There may be a whole new range of professions that haven’t existed in the past, from immersive experience designer to green construction specialist,” Ms Zheltoukhova says.

Beyond recruitment, algorithms are also giving bosses the unprecedented ability to monitor and measure employees’ productivity.

Fabian Wallace-Stephens, a researcher in the Future Work Centre at the Royal Society for the encouragement of Arts, Manufactures and Commerce, says AI is already used to allocate shifts and collect data to rate employees in lower-paid sectors in the same way passengers rate drivers on Uber.

“If you add wearable devices to measure individual performance you start to get supercharged capitalism, powered by data,” he says.

Unions can fight for data monitoring to be used to improve working hours and the working environment, rather than something that is used as a stick

He gives the example of the consumer retail app Percolata, which combines footfall sensors in stores with data on sales per employee to calculate the productivity of a shop worker, allowing managers to rank assistants and offer high-performing employees more shifts during peak hours.

This may seem sinister but unions and legislation could play an important role in this technological paradigm. When new sorting machines were introduced at the UK’s Royal Mail, for example, they cut the time workers took to sort packages. The Communication Workers Union took the chance to negotiate a shorter working week rather than lose jobs.

“This is a space where unions can have a bit of clout,” says Mr Wallace-Stephens. “They can fight for data monitoring to be used to improve working hours and the working environment, rather than something that is used as a stick.”

As intelligence infiltrates every part of the world of work, Mr Wallace-Stephens says people may come to realise that applicants and workers are worth more than the measurable data they produce.

“If algorithms are unbiased and we live in a data-driven meritocracy — are we happy about that?” he says. “A human might say that everyone is capable but some people need more support than others.”

READ MOREHow we will live in 2050
Ancient and active: are older staff in the workplace to stay? 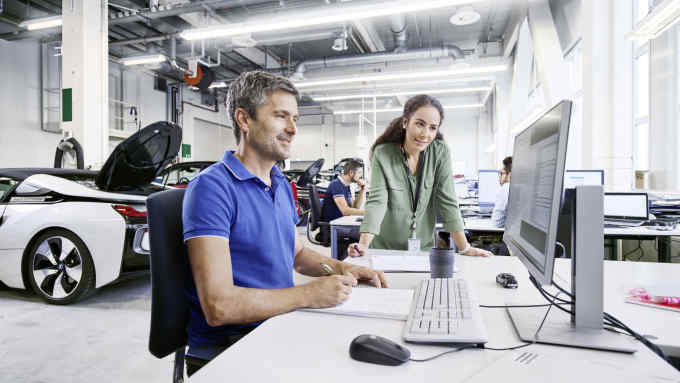